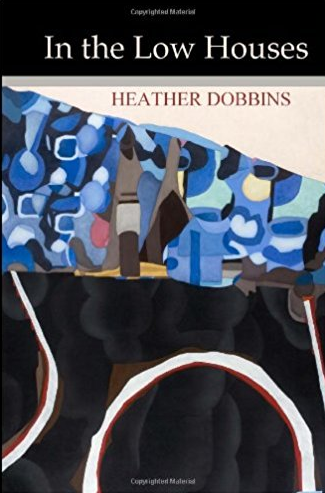 Most of us have been damaged or done damage to someone we love. Perhaps we fell into an affair, abused alcohol or drugs, or turned our backs on commitment. Who has not awakened at three a.m. to find the grinning demon of shame at the foot of the bed? If we are honest, we acknowledge our fears and dependencies, discern our selfishness and jealousies.If we are lucky, we forgive and find some sort of redemption, hopefully without spending too many nights with our mouths to a half-empty bottle of bourbon. In Memphis poet Heather Dobbins’ first full-length collection of poetry, In the Low Houses, published this year by Aldrich Press, there is a bottle of bourbon. Also marriage, infidelity, and death. There are graves, literal and metaphorical, and if, as T.S. Eliot suggested, our only superiority to the past is that we can contain it and be enlarged by it, there is something good growing in Tennessee.

In the Low Houses is a book that should be read front to back. Operating like the em-dashes and colons that frequent many of Dobbins’ poems, each poem continues, explains, deepens those that come before and after. Each poem is made more visible by the whole.

This was a surprise to me. While the first books of most poets represent years of work, the poems are typically crafted without a larger project in mind. I can’t say whether Dobbins wrote her poems with In the Low Houses as the goal or if the images—the necklace, raked leaves, the grave and its headstone, the bed and a bottle of bourbon—that reappear and link the poems represent ongoing obsessions. One doesn’t negate the other, of course, but whatever the background, this, my friends, is a book not merely a manuscript.

The book’s opening poem, “Foolheart in West Tennessee,” establishes the book’s dialectic themes of struggle: voice and silence, transcendence and failure, romantic love and loss. The poem also introduces the recurring image of the grave, which later we understand is the meaning of the book’s title. Dobbins writes:

These headstones go mostly unanswered.
June’s fields are brown, a leather abated
by heat. Above silk flowers and carved dates:
clouds like hair on a salon floor, dead.

It isn’t true that silence is wisdom.

The narrator wants answers. While we don’t yet understand the exact terms of the question, we do know from the poem’s title it concerns romantic love. We also, at this point, don’t know whether anyone will hear, much less answer.

Skipping stones, the water doesn’t respond.
Penny-wishes only green the copper.
A songbird never calls back.

“Foolheart in West Tennessee” is fourteen lines, mimicking a sonnet, a traditional poetic form of love and longing, though Dobbins eschews the form’s constraints of meter. The poem continues: “A love letter in pencil / was sent months ago, / unreadable in a few years.” The poem then ends with the line: “A foolheart will not lie.” The vowels of “foolheart” reverse and closely echo those of the “headstones” from the first, drawing a parallel between the human heart and the dead. Neither remains silent. Neither lies down.

“Foolheart in West Tennessee” is one of the few poems where Dobbins uses conventional forms. Still, most are shaped into stanzas, often into couplets although tercets and quatrains regularly appear. The couplet as means of organization is especially prevalent in the first, second, and final sections of the four-section book. Given that these sections deal most predominantly with the relations between the narrator and the beloved, this form feels especially appropriate. The second poem of the book, “Magnetism,” illustrates Dobbins’ technique:

If we pull together, there’s harmony.
If alone, I breathe in. Pull a deep draft of liquor.

After-supper lure to bother with window blinds—
a string is all that’s needed for privacy for lovers, but do

I have it in me? To couple. Touch what is known
for years, a fever whitened. Tame and blame.

There is a giving in to a husband and, later, to a lover. In “Where a Necklace Rests and I Cannot,” Dobbins writes: “I tell myself we are still safe / while our spouses are in the other room.” While it is sometimes unclear if the lover in some of these poems is husband or other, the blurring of the two mirrors the narrator’s confusion and sense of failure, which the poet signifies with the last poem of the section “Clay.”

O maker of paper and dams
formed after minerals of time,

teach me to adjust to the this bed,
its varved histories and sensitivities.

In this poem, the speaker practices “geophagy,” the practice of eating clay or earth. The narrator eats her own words; she eats her heart out.

The first section of the book deals with the early throng of attraction, the hesitancy and eventual giving in to love and lust, while the second section feels like a coming-to-terms with the frailties of marriage and an attempt at perspective.

In “Like Nothing Else,” one of the central poems of this second section, Dobbins turns to a touchstone, Wallace Stevens’ much-anthologized “Anecdote of the Jar.” As in Stevens’ poem, two of Dobbins’ primary concerns are struggle and the search for dominion. In Stevens’ poem, he places an empty jar in the northern hills of Tennessee and the wilderness begins to orient itself around the jar:

I placed a jar in Tennessee,
And round it was, upon a hill.
It made the slovenly wilderness
Surround that hill.

Co-opting Stevens’ images and metaphors as her own, Dobbins writes that “The subway is a jar // I cannot find in Tennessee.” The subway becomes the jar, the place of perspective; it is the psychic distance from which the narrator can begin to engage in her own struggle to define her marriage:

Frame of metal. My lids open. Stare.
Husband, this is good practice

in dominion. Ask another question.
Blood demands to be read.

The speaker does exactly what you’re not supposed to do on subway, at least not in New York where I come from. She stares. Like the jar in the Tennessee wilderness, the speaker begins to dominate this alien environment. The poet emphasizes this newfound strength with the poem’s concluding lines, addressed to the reader (who may be the person on the train):

Stranger, the best I ever look
is in a subway window.

In the Stevens poem, we can read dominion as science over nature, the poet over his art, or, depending on the bias of the reader (or perhaps the bias of the jar), of order over reality. In Dobbins’s work, dominion represents  an attempt to establish calm and understanding in the midst of personal chaos.

The third section of the book broadens its domestic aperture to include the larger family: grandfather, grandmother, father, mother, and brother. Formally, the consistency of couplets loosens to include free verse, tercets, and quatrains. Here, the narrator looks to those who came before her, if not for advice, for proportion. Dobbins opens the section’s first poem, “Stonebearer,” with the words: “Even in frost, I reckon with dirt.” Reckon, which means calculate, deal with, or in southern parlance, think. The metaphysical task of tending graves, or “the low houses,” as she again calls them in the poem, becomes literal as the narrator unsuccessfully attempts to make out the headstones: “The history of daylight and debris / in this women’s breath in sand and blight, hardly readable.”

Assuming her maternal grandfather’s persona, the narrator of “Jack Gaither, Snow-Walking Days and Days” endures his father’s abuse and then World War II. However, as the grandfather-narrator states, “At eighty pounds, I returned to my bride, / again walking.” Not only does he return, he returns stronger. In the following poem, the granddaughter tends to this same grandfather on his deathbed, and, in another, watches her grandmother decline into dementia. As she writes in “I Didn’t Believe Him,” by the side of her dying father, “I learned to clean up what has to fall down.”

In the fourth and final section of the book, other men make appearances, and there is again drunken flirtation. Tone makes these different from the encounters of earlier poems. The narrator faces her own frailty with honesty, impatience, and a dollop of disgust. At the end of the poem “Miss,” Dobbins writes:

At curtain call, eyeliner too thick, I smelled the miscast
fawn lilies you bought me. I licked a Q-tip, smudged
a new corner. I looked in the mirror, repeating,
“I am a married woman.”

The three-page title poem, which closes the book, is written again in couplets. Here, the narrator and her husband are building a bed, a metaphor for marriage. The poem begins with a question:

He asks, Is it even? In his hands, the frame, sure
as he held me this morning. That bed was a box

where we could hear each other breathe, mouths reddening
despite winter. We carry a grave to the low houses, sealed

and poured into. A feeling stays there, lies alone to itself.
Our bodies sometimes align. Said and skin, open and close.

Mostly we age, both and buckle, make difficulty
where there doesn’t have to be any.

We return to the operative word of the book’s opening poem: “A foolheart will not lie.” A foolheart does lie, the narrator now seems to suggest, but alone and only to herself. The poem continues as the couple assembles the bed, the narrator asking herself:

Can I go to him again? It is both “I miss you”
and “I miss you altogether.” The pull to keep, to keep.

The narrator does not directly address the question, but acknowledges the choice is hers, “No one can fix this but me.” The husband in the poem later admonishes her, “Do not look away like you are used to.” “For once,” the poet writes, “I do not flinch.” Finally, returning to the husband’s question from the first line of the poem, “Is it even?” the narrator closes the poem:

I want what everyone does, so taken
with touch and fingers that taste. Contain, try and try.

Fail. Wait. A lopsided gait. He says, Nevermind, love.
No one will notice but us. Crooked, I get it a little wrong.

Over and over in these poems, Dobbins navigates between husband and lover, commitment and infidelity, between the graves of the dead and bed of the living. Image by image, the narrator of this book seeks dominion over the chaos of the personal. In the end, the poet recognizes and her poems tell us, there is only trying. I cannot wait to read what Heather Dobbins next brings us.

Sarah Wetzel is the author of River Electric with Light, which won the 2013 AROHO Poetry Publication Prize and is forthcoming from Red Hen Press, and Bathsheba Transatlantic.