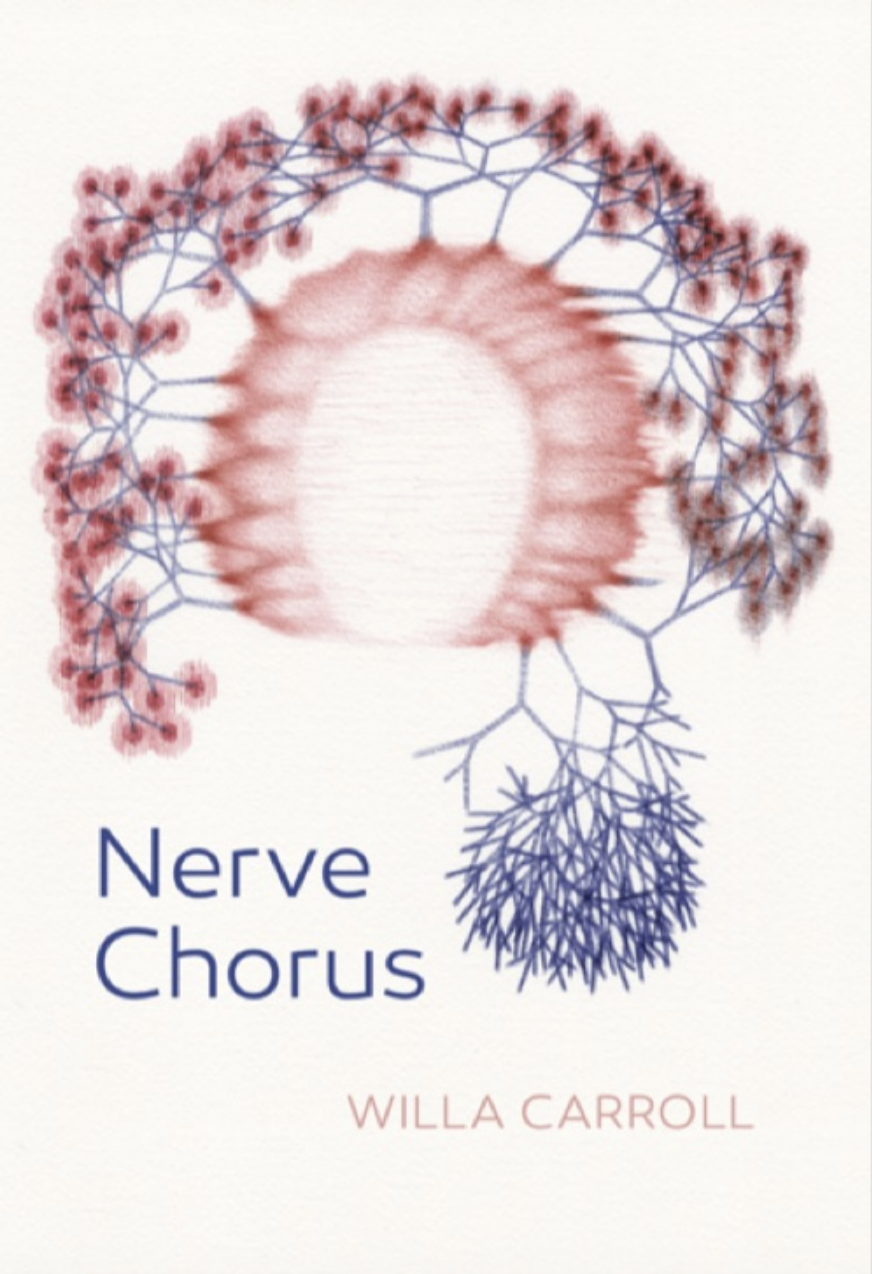 Willa Carroll was an experimental dancer and actor before turning to poetry, and many of the poems of her remarkable debut collection, Nerve Chorus, revolve around performance and the body. Her work reminds us that much of our experience transcends our verbal abilities. With personal subject matter and elegant, yet accessible, philosophical explorations, Carroll succeeds in maintaining a strong tonal unity and distinct lyricism. Like experimental dance, these poems invite a visceral experience. Meanwhile, they should be admired for their lyrical flexibility, the exactness of their imagery, their life-affirming quality, as well as their intellectual engagement. Though this is her first collection, Carroll’s poems have garnered attention for some time. She won Tupelo Quarterly’s TQ7 Prize for her poem “Chorus of Omissions,” and her piece “No Final Curtain” won First Place in Narrative Magazine’s Third Annual Poetry Contest.

Threaded throughout Nerve Chorus is a series of poems about the speaker’s loss of her father to an aggressive form of lung cancer caused by exposure to asbestos: mesothelioma—which, Carroll says, “[s]ounds like a species of coral.” What that and other experiences feel like in the body is expressed on the cover of the book—a pink bouquet of nerves forming a misty halo.

A recurring motif in the collection is the “chorus.” This incantatory echo of voices travels up the fibers of the book, along the network of its nerves. Nerve Chorus’s MO is controlled unease. An example is “Choriambush,” a surgically precise poem that reveals the father’s lungs are coated with asbestos. Here the medical staff is identified as a “[c]horus in scrubs,” a “gloved chorus,” and a “stricken chorus.” Like the chorus in Greek tragedy, which acts as the collective voice, the recurring chorus in this poem creates a sense of fate.

At times, the speaker finds refuge in soundscapes. For example, in “Role of Girl as Tree,” a poem about a girl taken into the woods by men, the speaker mentions the sounds of nature as possible sources of comfort, “I listened   to far sounds    cold surge of water / over rocks.” Carroll bravely, confidently sets the stage for us to witness disturbing situations, without overtly pointing us toward meaning. She also spares us sentimentality:

A full-throated example of the interplay of the chorus motif with imagery of place is “Chorus of Omissions.” Unlike much of the collection, which appeals with its restraint, this poem is long, its richness achieved primarily through anaphoric use of “zero,” “erase,” “cut,” and “omit” at the beginning of each line. The poem consists of a rush of memories from the speaker’s childhood in Rochester, NY. The sounds are thick, the lines heavy and measured:

Erase tracks of the Underground Railroad at 25 Main
where Frederick Douglass inked
The North Star.
Cut cuffs from a radical in black taffeta,
our Susan B. Anthony arrested at the ballot.

Later in the poem, the infamous Arthur Shawcross appears:

Zero the serial killer who lived at Hotel Cadillac,
moved near our old school,
delivered girls to the river.

Near the end of “Chorus of Omissions,” the poem moves from the public into the intimate sphere, and touches the central theme of the book: the nerve.

Refrain from recollecting your lips, our collisions in bed
tiny gongs in my nerves,
tidal waves of apples.
Zero the refrain, minus the song.

The energy rises and falls with each repetition. This has a visual effect as well, constantly sharpening and shifting our focus. The poem’s obsession with acts of undoing and canceling contains a paradox. The words imply preservation, keeping things as they were, but the poem ends up being about what the speaker wants to eliminate—adversities.

Many of these poems contain a sense of weariness or ennui. It seems the speaker, at times, cannot even muster a yearning for life to be different, and yet, the vivid language offers comfort. For example, in “Green Room,” a poem that describes the time before the speaker is even born, the mother sets the stage of her body—“She pulls / the curtains of her body around me”—while the father, a carpenter breathing in asbestos, is depicted in a magical manner, as he “sweeps fake snow from the set, / glinting flakes of toxic chrysotile.”

The more difficult the event, the more beautiful and theatrical the language in Nerve Chorus. “Emergency Room” is an example:

I’m now tying the sutures.
Such delicate work. The red gash is disappearing
like a girl folding her legs,
or velvet curtains closing on a stage.

“In Situ,” a poem informed by surgery, puts the body under stage lighting:

Peel back the right lung like a curtain,
draw the other open, making a theater
of the body, heart convulsing in place.

Life is presented as a play, a theatrical performance of fate, in which the speaker is, at times, a performer onstage, at others, an observer. We see this in “Occupational Hazards,” when the speaker takes us to the basement of a church where we see her father working, and then she transforms into a performer: “I costumed myself in his work clothes.”

Carroll’s work is at its most impressive when the speaker observes herself. In “Juveniliac,” this gaze toward the younger self is heartbreaking:

Nerve Chorus also incorporates references to artists, including Vaslav Nijinsky, the greatest male ballet dancer of the early 20th century, who, once diagnosed with schizophrenia, went in and out of psychiatric hospitals and asylums for thirty years. In “Mammal Vs. Reptile,” the mother’s lover gives the mother a “shiner” and the speaker a postcard of Arshile Gorky’s The Liver is the Cock’s Comb—a chaotic, bright, and unnerving painting, its forms undefinable. In the same poem, we encounter the dancer Isadora Duncan, who died in a freak accident, strangled by her own long scarf, which had gotten caught in the wheels of her car. In another poem, the speaker references Kazuo Ohno, a Japanese butoh dancer. Elsewhere, we meet Sam Patch, who in 1829 jumped from a raised platform into the Niagara River, “only to be swallowed,” Carroll notes, “in the gray froth of the lesser Genesee.” The speaker perhaps sees a shade of herself in each of these artists.

The final section of the book offers a sense of closure, with the “Broken Koan” poems patterned after Zen Buddhist anecdotes that reveal the limits of logical reasoning. This acceptance of our inability to fully make sense of the world or our origins is deftly apparent throughout this elegant, meticulously choreographed treatment of life as art.

Andrea Jurjević is a poet and translator from Rijeka, Croatia. She is the author of Small Crimes, winner of the 2015 Philip Levine Prize, and translator of Mamasafari (Diálogos Press / Lavender Ink 2018), a collection of prose poems in Croatian by Olja Savičević. Andrea teaches at Georgia State University in Atlanta, Georgia.

A. MAURICIO RUIZ
Higher Ground is an exercise in self-revelation on the page not only for Resi, but also for the author herself. “Resi ultimately enlightens herself and in doing so, I also enlighten myself by letting her enlighten herself,” said Stelling in an interview with the German radio station Deutschlandfunk Kultur.