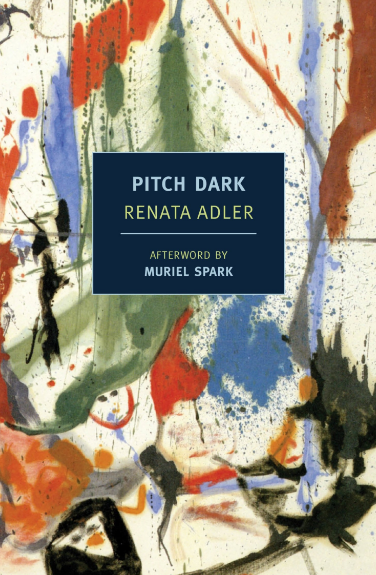 Renata Adler dedicated Speedboat (1976) and Pitch Dark (1981) for “A.” and “B.,” and like two LP sides, the novels, newly reissued by New York Review Books, are variations in a radical approach to fiction. They diametrically oppose E.M. Forster’s formulation that narrative is causation—not “merely” A happened, then B happened, but A caused B. Adler puts A next to X, with no apparent causal connection or temporal sequence. Many characters appear only once. But episodes’ consistent sentence structure and types of characters create a coherent tone. Its effect is hypnotic.

The narrators, Jen Fain in Speedboat and Kate Ennis in Pitch Dark, are both journalists, attuned to incongruity, aphoristic, given to ruminating on their own observations. Both novels can be placed, roughly, in the years leading up to their publication—Jen refers to Biafra, a 747, going to school in the 1950s; Kate worries about the IRA—but they never specify exact years, and time and place change from one paragraph to the next. Jen concludes Speedboat’s first paragraph: “Some people are indifferent to dislike, even relish it. Hardly anyone I know.” The next paragraph, set apart by white space, introduces a new setting and character:

“It is only stupid to put up the sails when the wind is against,” the wife of the Italian mineral-water tycoon said, on the deck of their beautiful schooner, which had remained all the summer in port.

Does Jen, the novel’s first person narrator, interject this? Or does Adler, the author?Speedboat refuses clues or context. In the next paragraph, Jen returns to herself: “A large rat crossed my path last night on Fifty-Seventh Street.” But we still don’t have a scene, in the usual sense of actions and decisions with consequences. “[H]ere, the inevitable is being interrupted by strangers all the time,” Jen observes later. ThoughPitch Dark has a more traditional narrative and sense of narrative time, Kate states, “I don’t know where it begins. It is where I am.” Context removed, everything becomes equally strange.

Speedboat is divided into seven chapters. One, “Brownstone,” won an O. Henry Prize as a short story in the January 27, 1973 New Yorker. Jen lives, dines, and parties in New York. She sees men named Will, Matthew, Aldo, and Jim, who works on political campaigns. She works for a paper, The Standard Evening Sun. She recalls a comparatively privileged upbringing. She travels to Mediterranean and Caribbean islands, most unnamed but guessable from Adler’s reportage and travels (Sardinia, for example). Jen may, at the end, be “about to have Jim’s child; at least, I think I will.” This follows a segment, longish for Speedboat, about an abortion provider. But Jen is more interested in what to make of things than what to do about them.

Jen relates almost nothing of what she feels or wants. Instead, she wittily juxtaposes incongruities. The residents of an island’s coast prosper from tourism, yet are Communists. The dwellers of the island’s interior scorn tourists and persist in banditry, and the Communists deplore the bandits’ “interior, criminal necessity.” Such setups lead to punch lines rather than narratives:

At six one morning, Will went out in jeans and frayed sweater to buy a quart of milk. A tourist bus went by. The megaphone was directed at him. “There’s one,” it said. That was in the 1960s. Ever since, he’s wondered. There’s one what?

Things, broadly, are out of joint. Jen’s generation came out of “travels abroad, and our own education” to their “first solid jobs in the city” with the expectation that stability and happiness would follow. One character is “on the board of a museum, two projects in urban renewal, a television network, a public utility, a film institute, and a foundation”. “There has always been, always, the preoccupation of people of our age and class with documents,” Jen states. “One got them the year one became of age to get them.” But while things were habitually amiss:

The concept of the jig itself being up, however, had retreated into thrillers. Intelligent people, caught at anything, denied it.

Jen’s sarcasm is rooted in genuine ideals. (Elizabeth Hardwick in a 1976 New York Review of Books essay referred to Speedboat as “a chaste book”). Jen’s situation doesn’t satisfy her, but she’s reconciled to it, or at least—which perhaps amounts to the same thing—able to sum it up:

Jim leads an exemplary life, and I can’t cook. As is clear from the parking regulations, however, there are situations in which you are not entitled to stop.

The passage, concluding a chapter that begins with flying lessons Jen is no longer sure of her reason for taking, evokes a conversation with a friend who often has bad news but tells it so wittily that the lasting impression, despite it all, is of her capability. Speedboat sustains such a consistent tone that it is nearly impossible to guess how much time passes. It all seems Jen’s present. The reader may come away thinking in Jen’s voice, feeling able to open to any point the book and not have missed a bit.

Pitch Dark’s narrator, Kate Ennis, is more of a physical presence than Jen, and more concerned with and revealing of herself. Feeling unable to continue in her affair with Jake, a married man, Kate travels to Orcas Island, in Washington state’s Puget Sound, then to rural Ireland, where she side-swipes a truck and then removes the rental sticker from her car. Imagining she’ll be arrested for the sticker, and that the truck driver is trying to scam her, she flees to London. (She’s right about a scam, but not about the target: the rental car company gets taken for the cost of an entire truck.) She drives through the night in headlong passages of monologue, sustained for pages at a time, which make the landscape seem to shift in response to her thoughts and feelings:

Then I drive straight, straight, and the rain stops, the sky is clear black, all the stars are there. I cannot see, on either side, the roadside, but I have the sense, always, of those long stone walls, meadows, sometimes the sea, the cows, the incredible unseen beauty of the Irish countryside.

Adler renders the texture of thought, the phrasing of a particular personality, and the sense of travel time, using only intermittent physical details and a galloping cadence:

…in the long spells of driving through the dark, there begins to rise in me an exaltation. I cannot see where this will end. I still have the sense, how to put this, that the land, even the sleeping country towns, know of me. That they are aware that I am passing, whether they follow or not: one car, torn fender, missing rental sticker, bound, they cannot yet know for where. […] Into this kinetic scofflaw joy, the realization that I have, in all probability, missed my turnoff, the turning around, the car arrived too late to see me turn, so that, if he was following, I will have lost him now.

In sentences of such momentum, Kate’s fears that a truck driver she stops to ask directions is working for the IRA or may think she works for the IRA seem entirely plausible.

Many episodes in Pitch Dark are rhetorically framed. “Here’s what seemed to us… a daring story with an important denouement,” begins one section, and another, “Here’s how I know that I’ve already lost him.” The framing pauses time. Is the reader being sent backward or forward? Pitch Dark reveals its narrative recursively. Kate quotes an “Amy” numerous times, and not until three-quarters of the way through relates the details of their acquaintance.

“For a woman, it is always, don’t you see, Scheherazade,” Kate writes, or tells Jake.Pitch Dark is less about what happens to Kate and Jake than how she contrives to continue talking to him. Repeated fragments become refrains. Some need little context and resonate far beyond Kate’s circumstances:

Did I throw the most important thing, perhaps, by accident away?

Elsewhere, fragments can seem placed for effect, stylistic flourishes marking time. “Look here, you know, look here” returns in several variations: “Well, but I, don’t you see”; “But in London, don’t you see, the phone rang”; “Well, but I, don’t you see, I had just taken the shuttle from Boston to La Guardia.” Sometimes it’s not clear for pages (or at all) who Kate is talking to or what she’s equivocating about. For most of the novel, Jake is scarcely a presence, insufficient either to be Kate’s interlocutor or for his apparent promise in the end to “change things, if that’s what you want.”

Jen Fain would not have time for Pitch Dark’s introspection. She sticks to what she can be certain of, even if things don’t connect. Speedboat is what Kate might call “reasonable”—the consequences of what Jen relates remain “truly and altogether in the future.” Kate, in her trepidation, her direct addresses to Jake, her recursive fragments, attempts something entirely different:

…an abrogation of the law in one’s own special case. […] The forbidden, the solipsistic tense is this: that things will have been other than they were.

“No one is afraid of yesterday,” Kate observes at the end of Pitch Dark. She does not entirely succeed in making her story, itself, compel attention. But she succeeds, beautifully, in making yesterday still seem up for grabs.