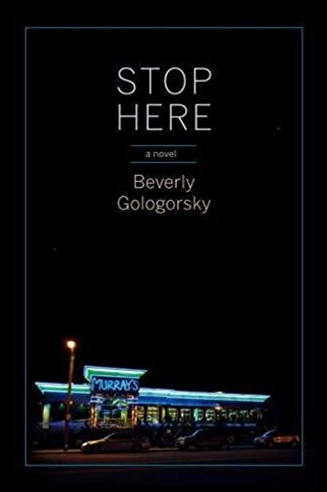 My family eats a Long Island diner breakfast every Saturday morning. We say hi to our neighbor, Lucille, who waits tables; our toddler jabs at the jukebox as my husband orders the Hungry Man; we try to ignore the flat-screen on the wall, which is unfailingly tuned to Fox News. Luckily, there’s good eavesdropping to be done. What we overhear from nearby tables usually beats Sarah Palin stumping for the flat tax.

Beverly Gologorsky knew what she was about when she chose a diner as the center of her new novel, Stop Here. I’d wager there’s a diner at every exit on the Long Island Expressway, and they’re rich with fictional possibility. More than other restaurants, somehow, diners feel like places to talk politics, hash out family conflicts, make business plans, cement friendships—and Gologorsky serves up all of these in her novel Stop Here.

The chapters (which often feel much like interconnected stories) are told primarily  from the perspective of the middle-aged waitresses and cooks at Murray’s Diner: Ava, Shelly, Mila, Rosalyn, Nick. The book takes place shortly after the start of the second Iraq war, and nearly every character in the book is paying the cost of war in some way:

Ava lost her husband to the 1990-91 Gulf War and is now raising her son alone.

Shelly is married to Bruce, a Vietnam vet. Their anxiety for their son—who is now serving in Iraq—drains the life from their marriage.

Mila’s daughter Darla, bent on enlisting in the Army for the promised college money, is naïve about the risks.

Nick’s daughter, too, wants to travel to Iraq, and is equally cavalier about the danger—but wants to go not as a soldier, but as a Witness for Peace.

Together, their stories create a 360-degree picture of the ways war robs a family, a marriage, a life. They also illustrate the very real relationship between wealth, class, and vulnerability to the consequences of war. Murray, the diner owner, is the most affluent character in the book and—never having served overseas—the most enthusiastic supporter of the Iraq war. His wife, Sylvie, has vague misgivings, but they’re intellectual; the conflict overseas affects her less than the antics of Murray’s Dobermans. The couple’s money and childlessness shield them.

Gologorsky is troubled by war and poverty, and I’m right there with her. I’m delighted to find a novelist with the courage to write about things that ought to get written about much more often—how war affects already-struggling people. Her first novel, The Things We Do to Make It Home, explored the domestic wreckage wrought by the Vietnam War.

Gologorsky has been active in the peace movement for decades. It’s a tricky business, writing fiction about one’s deeply held beliefs. She bares hers in the book’s first sentence: “There’s no way to ignore the warmongering on Fox News, though Ava is trying.”

As the book went on, I longed for at least one sympathetic pro-war character—a veteran, maybe, who became more committed in the service instead of turning anti-war. I say this not in the interest of rendering the book “Fair and Balanced” (forgive me), but because it’s the truth of living on Long Island. For all the Long Islanders like the ones in Stop Here—skeptical of war because they’ve experienced its high costs—there are also many like my next-door neighbor, an Iraq and Afghanistan vet whose kitchen window is curtained with an American flag. He and I exchange only pleasantries, never talk politics, but from his bumper stickers and his offhand remarks, I gather he’s not spending his weekends marching with Veterans for Peace. One of fiction’s chief strengths and pleasures is the potential to experience an unfamiliar life. I’m much closer to the politics of Gologorsky than those of Fox News, and that’s the very reason I would have enjoyed a convincing sojourn into the mind of someone like my neighbor.

Gologorsky plants Long Island references throughout Stop Here; I was cheered by mentions of Sunrise Highway and Newsday. But it isn’t quite clear where on Long Island the diner is located, and that matters in a place with pockets of extreme wealth, extreme poverty, and every level of middle-class sprawl. There are references to Sag Harbor and Jones Beach, but those are ninety miles apart. And the characters sometimes say things I can’t imagine hearing from my neighbors: “Heavens.” “Cockamamie.” “One has to work at it, together.” Early in the book, I started to experience cravings for authentic salt—Long Island sarcasm and wisecracks.

About halfway through, however, the book takes on a more pronounced Long Island accent. The flavor and feel of the place intensify. Women punctuate their gossip with “That’s life, what can you do?”, and I can hear just how they say it. A main character develops breast cancer, an astute choice on the part of the writer; breast cancer rates on Long Island are 18% higher than those of the rest of New York state. (Alcohol consumption, studies have found, is partially responsible for those rates—and there’s a lot of that in Stop Here.)

And when Gologorsky begins to explore the conflict between Mila and her daughter Darla—Darla wanting to enlist, Mila straining to convince her not to—Gologorsky’s understanding of their desires, combined with her ability to create a sensory world, bring the reader deep into the ache of working-class family life on Long Island. Here’s Darla, going to the beach with her friend as they contemplate enlisting:

Her bare feet tramp the damp sand. The sun has disappeared. They walk to the shore and sit, listening to the crash of waves. In the gray distance a ship cruises the horizon. Gritty wind blows in her face, her skin clammy. It’s fine. She’s open to the elements, but worries about how tough army training will be. She’s not an athlete.

Grittiness, clamminess: This isn’t some tropical resort beach, rather the kind you go to because it’s close and a place to think. Having Darla imagine military life in terms of the beach she knows is a lovely, smart way to show her youth, inexperience, and fear.

In a final effort to sway her daughter not to enlist, Mila spends money she doesn’t have to take Darla to her favorite pub:

Beer and fish smells mingle. Netting hangs from the ceiling, a cardboard mermaid caught in one. Blue haze floats under fluorescent lights…In a high-backed booth with wooden benches, they open their menus. A woman and four antsy kids sit nearby.

These sensory details do more than just convince us we really are in a Long Island seafood joint. They evoke the “caught-ness” of these characters and plant us firmly in Mila and Darla’s world. And when we get there, the motivations and desires ring true—for example, Darla’s restless desperation to escape “everything in the burbs.” Darla speaks first, then Mila:

“Suffocating. People talk about anyone who’s not like them.”

“You find that everywhere.”

“At least in the city there’s shame.”

The yearning to get off the Island, the feeling that somehow things are better “in the city” or anywhere else are more powerful than a mother’s plea for safety, and Darla enlists.

Mila, like most of the women in this book, is resilient. Here she is at the book’s end, talking to Ava, the war-widow waitress. After years of struggling with the realities of economics and war, Ava has a surprising opportunity to change her life for the better (a delightful plot turn that Gologorsky throws in toward the end of the book). Ava’s afraid to leap; Mila urges her to take the risk.

“Hey, I’m no fan of unnecessary inconvenience, struggle for struggle’s sake…all that bullshit, not when life’s too ready to surprise you on its own. You didn’t expect to be a widow….I didn’t bring up Darla to send her into danger…The alternative, though, is some crazy attempt to hold it all in place. It can’t be done.”

This sounds like the Long Island I know. In the end, Mila can’t keep her daughter on the Island. But with the authenticity of moments like these, Gologorsky keeps the reader here.