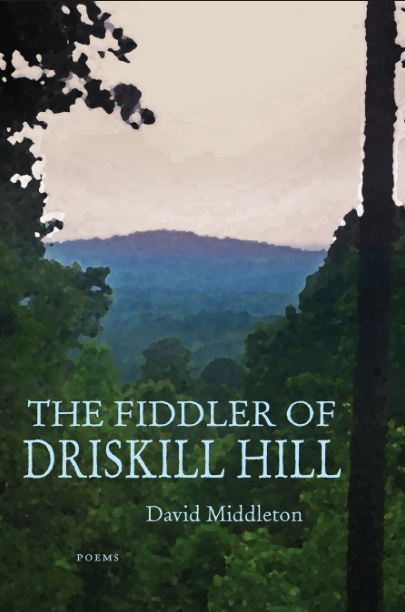 Southern writer can be a term of endearment or an epithet. The late Mississippi-born novelist and short-story writer, Barry Hannah, bristled at the label. “Professional Southerners sicken me,” he said. Yet to my ear, Hannah’s work sounds entirely Southern.

Being from Mississippi and sounding it (I’m sure), I can’t help but feel that idiom has more to do with the Southern-ness of literature than geography. So I found myself at a loss when I began reading David Middleton’s The Fiddler of Driskill Hill. The content of Middleton’s poems is undeniably Southern: Louisianan, precisely. The landscape of bayou and sugarcane figures throughout the collection, most vividly in the opening poem, “Bonfires on the Levee.” Lighting bonfires on Christmas Eve to greet Papa Noel (Santa Claus in non-Cajun country) is a tradition that, unlike Mardi Gras, hasn’t been commercialized. Middleton honors the quietude surrounding the custom in his poem:

Or by the river bank’s entangled brush

Then cut and stack and soak in kerosene—

Riding over the beaches and the bluffs—

The solemn work of preparation is as much a part of the ritual as the fires themselves. Having spent time in Louisiana, I was quite familiar with river levees before Hurricane Katrina. I have seen the “entangled brush” of the swamps and know the stubbornness of cane and willow. The poem looks Southern. But—and Barry Hannah’s ghost will probably throw his bourbon at me when I say this—it doesn’tsound Southern to my ear.

I don’t mean to suggest that Southern literature must drop its final consonants, talk to all y’all like this, or refer to NASCAR and/or grits. Middleton works hard to plant his poems firmly in the physical Louisiana, to the point of subtitling them with Wordsworthian specificity, telling us the cities (even the street address of a house Middleton and his wife shared in one poem) where they are set. He uses meter, which doesn’t throw me—hell, we practically invented rhythm down here. It’s his preference for iambic pentameter—the ten-syllable line favored by the English dramatic and epic poets—which bounces up in nearly all the poems, that pulls my ear in an odd way. Blank verse or unrhymed iambic pentameter is beautiful—it is one of the reasons Paradise Lost is so incredibly rich. And Milton may have been a hellraiser, but I have trouble seeing him in a juke joint. Iambs are polished and noble. They ain’t funky.

If Middleton were writing poems about maple trees rather than cypress, about the Atlantic, rather than the Gulf, would I feel that words, place, and voice were better aligned? Would I still find them stilted? Take this stanza from “The Breakers:”

“So noble in their hallowed altitudes/ The stars withstand the breakers of the waste,/ Lords of the lunar dunes their night includes,/ Now braced against the void they once embraced.”

This is lush writing, meticulously attentive to form. The stanza before this one contains images of seashells tossed and battered in the surf. There, appropriately, Middleton deviates from the iambic, tossing in an extra syllable and odd foot. The diction is elevated, bordering on pedantic, but hey, he’s got ten syllables to fill in each line. Yet, pedantry doesn’t carry a lot of weight in Middleton’s or my neck of the woods. (Recently, I was mocked for using mélange on Facebook.) Middleton’s credentials are in order. His bio says he was born in Shreveport, Louisiana, and taught at Nichols State University in nearby Thibodaux. (That’s pronounced TIB-eh-dough, in case you were wondering.)  The book was printed by the Louisiana State University Press in Baton Rouge, but I’ll bet what little money I have people down there don’t toss the word “magnanimity” around as Middleton does in “Flies and Grounders,” a homage to his cousin and childhood playmate.

I liked a lot of the poems in this volume, but had trouble reconciling diction with content—until I got to the appropriately titled “Epiphany in Lent.” The poem gives us scenes of a Mardi Gras parade drawing to a close as “diehard revelers head to bayou bars/ While I, curtains drawn, remain apart,/ As I have done for more than forty years.” Now, I get it. The speaker of these poems lives in the South, but stands aloof. He doesn’t want his voice to blend into the chorus of elongated, throaty vowels doused with sweet tea. He is much like the speaker in Langston Hughes’ “Theme for English B,” who resents the assumption that his theme will sound like what the white teacher thinks black people should sound like. The speaker in Middleton’s poems is content to be “[T]he alien celebrator of his home/ Shown in the heartfelt psalms his mind refines.” If he’s O.K. about not sounding like everyone around him, then why should it bother me? Fair enough. Mea culpa.

In this context, the lack of a Southern voice seemed natural. The long poem, “In Allen Hall,” takes place in an academic building on the LSU campus. In the first section, “Of Textual Editing,” the speaker appears alone, editing classical Latin texts. In the third stanza, he takes a jab at the postmodern “language is dead” theories: “And though today loud Humpty Dumptys claim/ That words mean only what we say they mean,/ Yet I in quiet will weigh them just the same.” The irony in this is hard to ignore: An egghead calling trendy theorists “Humpy Dumptys.” And in the poem, “Before and After Reading,” we see the speaker with a cabal of poets in a New Orleans coffee house “polishing a line,/ Community in grounds and sounds ground fine/ For rarest listeners.”  In this poem, the speaker is one of a group of Christians, whose faith sets them apart from the literary crowd:

We knew the tale

Of readings where smart smirks and sighs assail

Verse fleshed with images that bear the Word,

Staves staving off the utterly absurd,

Shunned by some smug editors annoyed

By changes tolling into a tongueless void.

I halfway identify with this. I describe myself as a Christian, but am tempted to roll my eyes at the “woe is me” attitude portrayed here. It’s tough being a Christian in North Korea; I can’t say the same for down here. We are church-going folk, after all. Academic circles do tend to give Christian literary writing a cold shoulder. Much of it unfortunately comes off as condescending, smug or Hallmark-esque. Defensiveness doesn’t help the case.

Middleton’s dressed-up, buttoned-down voice falls flat for different reasons in the elegy to his father, “Daddy,” subtitled “after Sylvia Plath, author of “Daddy.”Middleton’s poem bears only a nominal resemblance to Plath’s. There is no rage, no screaming. Where Plath compared her “daddy” to Hitler, the devil, and vampires, Middleton’s is “singing in your workshop, shaping clay/ In male and female obelisk and pot,/ Then glazing them in colors of the earth,/ Late autumn shades of gold, brown, orange, gray…”  Invoking the spirit of another writer in such a contrarian way is risky, and in this poem, the risk doesn’t pay off. Why pair such diametrically opposed works? To show that daddies can be kind? Does that honor or undermine the homage to his father? In “Two for Life,” the ubiquitous pentameter is replaced by tetrameter, but the diction doesn’t adjust for grief. A husband, realizing his wife has just miscarried, “shakes as a grave equation sears/ A heart too long in mind’s control—/ Each lost child: a human soul—/And weeps in quiet his manly tears.”  To me, this description is too clean, the language too controlled, the chaos too neatly shaped, to borrow a line from a friend.  Even when Middleton adopts personas—the janitor in a college building, a Confederate sniper—the voice sounds the same as when Middleton is assumed to be the speaker. I admire his devotion to structure, but occasionally the skeleton is too visible.

When I read Barry Hannah or William Faulkner, I like to drink whiskey. Welty pairs well with iced tea, mildly sweetened. The Fiddler of Driskill Hill asks for hot Darjeeling, in a cup with saucer. The poems are, to swipe a word from a back cover blurb, stately. They are a welcome break from the noise of the world, though at times I wish they shouted more. Middleton’s refusal to adopt local parlance is oddly Southern. What are we if not a touch stubborn and slow to change?

James Dickson teaches English and Creative Writing at Germanton High School in Madison, MS.  His poetry appears in The Louisiana Review, Spillway, Glassworks, and other journals.