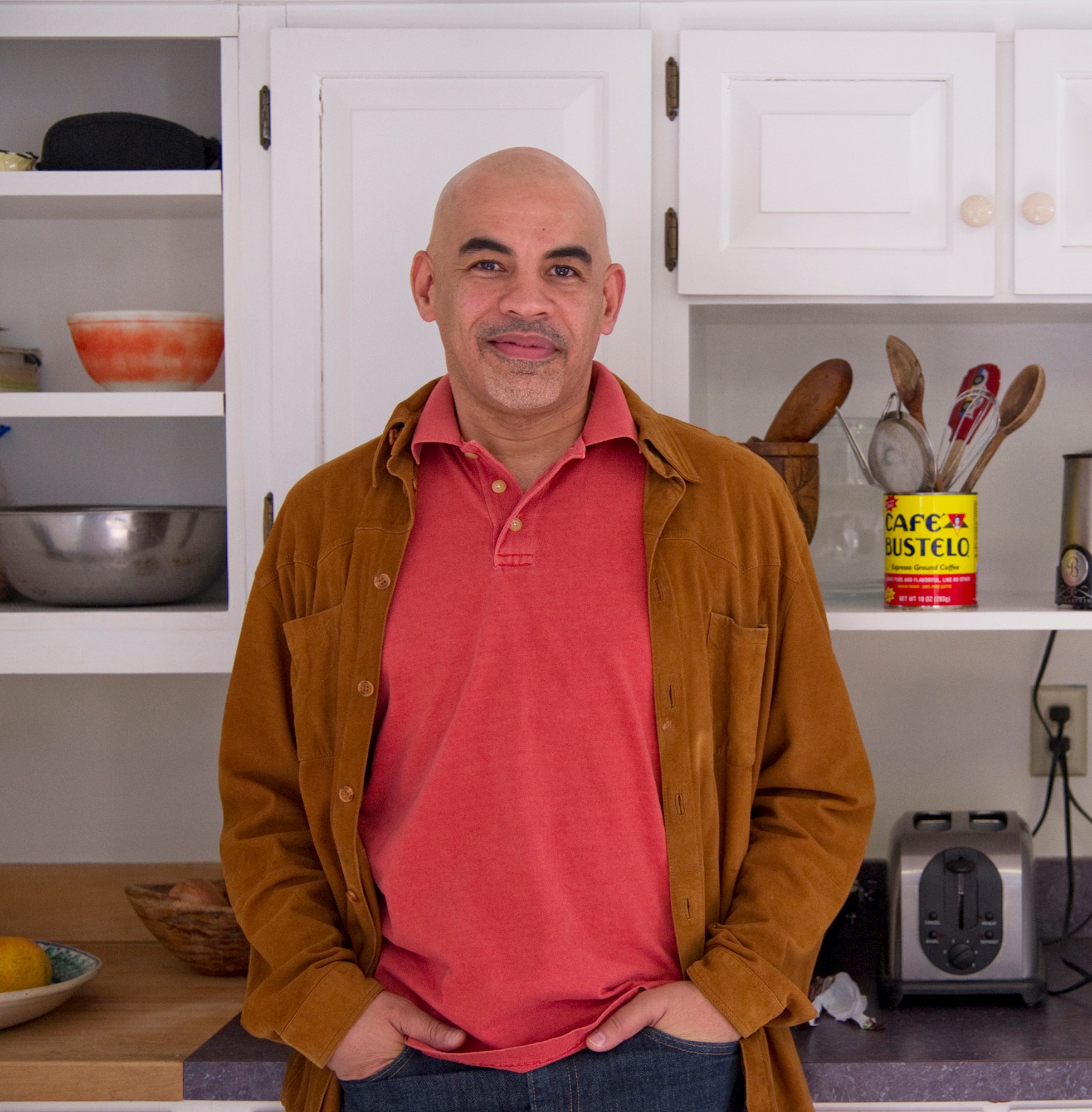 Poet Willie Perdomo at his home in Exeter, NH
Daffys and Paperwhites

Willie Perdomo is a Puerto Rican poet and storyteller. He is the author of The Essential Hits of Shorty Bon Bon (a 2014 National Book Critics Circle Award finalist), Smoking Lovely (winner of the 2004 PEN Open Book Award), and Where a Nickel Costs a Dime (a Poetry Society of America Norma Farber First Book Award Finalist). Perdomo is currently an English instructor at Phillips Exeter Academy. His latest collection, The Crazy Bunch, is forthcoming in 2019, and his poems Breaking Night, They Won’t Find Us in Books, and We Used to Call it Puerto Rican Rain are published in Issue No.16 of The Common.

Via email, Lisa M. Martinez recently spoke to Perdomo about what it’s like to write about his former home, New York City, where much of his inspiration still lies. Perdomo discusses his relationship with that city, communication with ghosts, and the power memory has to transport us to a “gone place.”

Lisa M. Martinez (LMM): In your poem “Breaking Night,” there are phrases that bring your audience directly onto the streets of New York City—as if we are all getting ready to hop the public pool gates with your subjects—“Cherry blossoms caked on Mount Morris octagons, and the M116 rumbled a tune of transfers straight out / of the depot… The ghost of nasty Rucker Park crossovers.” It is unmistakable that NYC as a place, and a feeling, enters your writing. Has this connection changed since you moved from the city?

Willie Perdomo (WP): I love this question. Only because it’s something I’ve been thinking about for the last five years. How is one to reconstruct a memory of a place that doesn’t exist anymore?  I mean the buildings are still there, but the faces are no longer the same. Gentrified NYC has pretty much eviscerated the nuances of particular neighborhoods, like El Barrio. Writing The Crazy Bunch was like living in a collective memory. I kept returning to the same handful of memories, most of which were traumatic and probably had long-lasting effects on the crew in ways that we probably won’t understand for quite some time.

The physical connection to the city has been strained due to distance, so my relationship with the city is that of a native son who comes to visit infrequently just to bemoan its disappearance. One of my worries was how to tap into the language of those memories if I’m far from it. As a younger poet, I would stand on the corner of Lexington and 123rd and just soak up vernacular and imagery. But living full-time in New Hampshire has forced me to tap into a deeper linguistic recall. Luckily, the voice for the book arrived as a direct and rapid response and it became clear that my audience was specific. The more specific the language, the more liberated the speaker. And whereas The Essential Hits of Shorty Bon Bon was my descarga book, The Crazy Bunch became my hip-hop cipher book.

LMM: In your interview with Poets on Poetry, you explain the ways in which poetry allows you to navigate two worlds by “…taking the good and the bad, right and wrong” and also “reversing them or turning them upside down, so that what you think is good is actually bad, and what is bad is good.” Much of what you illustrate in that interview is ubiquitous in “Breaking Night”—there is a sense of carefree rule breaking and nostalgia weaved throughout. How has this awareness of two worlds become more complex and/or evolved throughout your writing?

WP: The awareness seems to evolve with each book. It’s like the crew needed to experience death, violence, altered states, and the pathology of living in an inner city; and still attempt to find “the smile at the bottom of the world.” Technically, with The Crazy Bunch, it was a matter of: how much can I do with a line in a single poem? The rule says that a poem’s pattern should be set early. In the case of The Crazy Bunch, I might start a poem off with a Whitmanesque line, break off into a few lines of pentameter, and then flip into brief, hip-hop couplets. That’s the way I remember hearing stories about brothers who ran to the hospital with bullets in their ass. I was okay with using an irregular rhythm, disrupting patterns, and issuing moments of reflection and commentary, because I was certain that the pieces would hold up as part of a whole. You will see that along with catalogues and lists, I use vignettes and dialogue as a way of relaying a moment. Storytelling is not a monotonic medium. Rule breaking is a conscious decision and, yes, it comes with consequences. I think the nostalgia is really a specific memory made of the right words that are more celebratory, elegiac, than nostalgic.

LMM: The Essential Hits of Shorty Bon Bon narrates the imagined life of Shorty Bon Bon, a percussionist of a salsa band in the 1960s and 70s; this character is inspired by an uncle of yours whom you’ve never met—which brings me to your Q & A with City of Asylum. When you were asked “why do you write, who do you write for?”, you stated that “writing has been a way to communicate with ghosts…” We see how that turned out in Shorty Bon Bon; what other ways has this idea of ghosts informed your approach to your work?

WP: The visitations usually appear in the form of a question. With Shorty, the Poet was asking the question. With The Crazy Bunch, the audience was asking the question; more specifically, all the way from my living room in New Hampshire I could hear my boy Baby Los, from his cell in Sing Sing, ask, “When you gonna tell the story about the crew?” And this happened immediately after I saw the HBO documentary Nas: Time is Illmatic. Now, implicit in Baby Los’s question might be the need for his memory to be preserved as living document of a specific time.  I’m certain that the rest of my books will have the same type of door knock when they arrive.

LMM: In “Breaking Night,” there is a line that is so incredibly vivid to me as a Puerto Rican, “The park was already fired up with cauldrons of gandules & asopao, all kinds of fricassee, & long grain Canilla lined with the story of an uprising.” These dishes play an important role in bringing my family together. They create a sense of familiarity and nostalgia. Can you talk about the relationship to food and memory?

WP: It’s the “things,” the details that transport us to that gone place. I can only imagine how survivors of Hurricane Maria will now respond to their earlier memories of the island without the physical signifiers. I remember seeing a piece by Pepón Osorio at the Museo de Arte de Puerto Rico and I was instantly transported to East Harlem. His level of attention to detail made me ecstatic; it became a pretext for remembering.

LMM: You have this incredible ability to write poetry for both on page and for the stage; do you find any distinctions between your written poetry versus your spoken word poetry?

WP: I haven’t been on a stage in so long that it would be difficult to answer this question. I did a reading in San Francisco this past summer, and one dude, a faculty spouse, came up to me and said, “I think that’s the least I saw you move when reading.” He had seen me read before, apparently. Now, mind you, this is a white male making the comment. That’s his gaze. So, what might be the implications of his comment? That he was paying more attention to my body than my poems? That somehow the more you move while reading a poem, the less effective the poem? That somehow my body needed to be controlled? What he didn’t know was that sometimes a poem speaks through a body. It’s obvious that a poem heard is different from a poem read. The discussions around the binary have been destructive, I think. I think any voice worth its measure should be able to rock on different levels regardless of their performative value. I like to think that one is influenced by the other; they are not mutually exclusive.

LMM: Who are the writers who’ve really shaped you?

WP: It’s funny, you say “writers,” and I immediately think about movies like Cooley High, Enter the Dragon, or the album Concepts in Unity (Group Folklorico y Experimental Nuevayorquino) as some of my primary influences.  If I had to name some writers, they would be Ed Randolph, Raymond R. Patterson, Jean Toomer, Amiri Baraka, Piri Thomas, and Ntozake Shange.

LMM: A quintessential question for a writer: Where do you write? Has your chosen environment shifted since you moved from NY?

WP: Corners. It’s always been corners. Corners help me see angles. All of Where a Nickel Costs a Dime was written on the corners of 123rd Street and Lexington Avenue in East Harlem. After hanging out for a day, an evening, or breaking night, I would retreat to my Olympia electric typewriter that was usually sitting on my desk, in the corner of the bedroom where I looked out of the window as a kid, and would get to work on a poem.

When I lived in Brooklyn, I wrote The Essential Hits of Shorty Bon Bon in the corner of my living room, near a window that led to a fire escape. I wrote on a small IKEA drafting table, with a good desk lamp, and my old blue, swivel chair that is an ergonomic bully. These days, I still write on the same desk, in the same chair, and I write in a corner of my study in my New Hampshire apartment. But now, instead of fire escapes and jungle gyms, I have a view of tree canopies and church cupolas and, to be honest, I can see Lexington Avenue clearly from there. Recently, I’ve taken to writing standing up and pacing as I write.  I tend to think better on my feet.

LMM: In your interview with Poets On Poetry, you mentioned how the most common question that you are asked is “Why do you write poetry?”; and that you try and answer the question differently each time. There, you articulate that you write poetry to combat all the times you have been silenced—but also writing poetry puts you in a spot of being courageous, though at risk as well.

I am challenging you with that question here—why do you write poetry?

WP: After 25 years of trying to write poetry, I decided that if you scratch this poet, what you’ll ultimately find is storyteller.

Willie Perdomo’s poems Breaking Night, They Won’t Find Us in Books, and We Used to Call it Puerto Rican Rain were published in Issue No.16 of The Common.