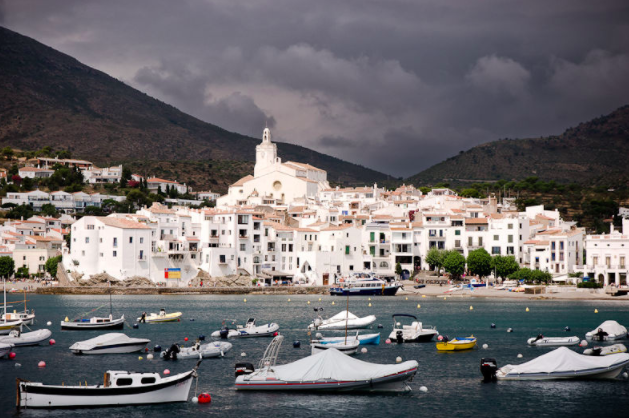 This rain, with its attendant cold, is unusual and highly unseasonable. By June Cadaques should have perfect beach weather; after all, that’s what has drawn the well-dressed French and German visitors. But instead of relaxing in Euro-chic style along the sheltered bays that span this northeasterly corner of Spain, we’re all wandering the slate-cobbled medieval streets of the village looking for amusement or distraction. Only over-priced cafes and too-precious boutiques reward our efforts.

Once upon a time Cadaques was a Catalan fishing village, remote and undistinguished. But then Salvador Dali decided to make his home in Port Lligat, a mere 20 minutes’ walk away. His Surrealist friends came to visit, the painters discovered the special light off the bay, and Cadaques hit the cultural big time. Collioure, a smaller fishing village just up the coast but on the other side of the border in France, boasts that Modernist painting was developed there during two summers at the beginning of the 20th Century. Cadaques can only reminisce about the days when Dali would bring Gabriel Garcia Marquez to hear jazz at l’Hostal, the bar that still swings late at night on the main passeig.

There was a time, in the early modern period, when Art was the new religion. Now, it seems, the mere memory of art is enough to bring chic visitors with money. They walk the Passeig de la Plaja by day, wander the narrow slate-cobbled lanes of the old town, visit the art galleries as the shrines of their new religion, which these days is more Commerce than Art. By night, they pay too much for Cuina Catalana and fresh fish in small restaurants that still boast that Dali used to eat there. A North American visitor is surprised to realize that Puerto Vallarta seems more authentic than Cadaques.

I was lured here by an Australian artist friend, so enthralled by the light on an earlier visit that she simply had to come back. But even she, working hard to maintain her attitude of ‘looking on the bright side’ – I’ve learned that’s Australian for ‘stiff upper lip’, or even ‘sweep the unpleasant under the rug’ – admits that it’s not the same.

There is history here, of course, but you have to know it to find it. The 700-year-old Esglesia Santa Maria Virgen de la Mar, located halfway up the hill of the old town, still creates the focal point for photos and postcards, still boasts impressive carvings from Spain’s 17th-century Golden Age, and still offers its august view of the harbor. The tiny Carrer de l’Esglesia leads directly to the Carrer des Call; here as throughout medieval Iberia, the Jewish quarter sheltered for protection under a wing of the church. Most passing tourists snap at least one photo of the narrow winding passage with its clean whitewashed walls, its bold lush bougainvillea, its smart shops; they are unaware that they are in the heart of the medieval Jewish quarter. When questioned, the woman who runs the toy shop at the head of the Carrer des Call will agree that “Si, si, es el barrio antiquo des Judios”, and will even say that the site of the old synagogue is around the corner. But she has no idea when the last Jews lived here, and of course the polite visitor is too discreet to mention the Inquisition or the Expulsion of 1492.

As is often the case in older quarters in Spain, internet connectivity is spotty; they say it has something to do with the thick stone walls. It’s in the wifi cafes – the locals pronounce it “wee-fay” – that the real Cadaques reveals itself. Bar Nord-Est has the best harbor view, and draws the glamour crowd; here you can get a smooth cocktail with your connection, and the dress code is definitely upscale. Brown Sugar is the hippest place in town, and has the best music, plus hookahs on demand. My personal favorite is Es Torradet; although it’s on the main street, and the outdoor terrace’s cigarette smoke is thick (even Spain recently succumbed to no smoking in indoor public places), it attracts a cross section of local patrons and virtually no tourists or visitors.

A weekday afternoon at Es Torradet brings out the local youth, pierced and tattooed, talking loudly on their cell phones and calling out to friends as they pass on their ubiquitous motor-scooters. It’s tattooed artists like these, I imagine, who create the bold graffiti on all the broad walls in town – “Free Tibet” urges one, while another declares ‘Down with Fascism”, alluding to the popular protests currently sweeping Spain’s larger cities. Official Cadaques may be a memorial to Dali and his famous friends; the real Cadaques is definitely living in its own time.