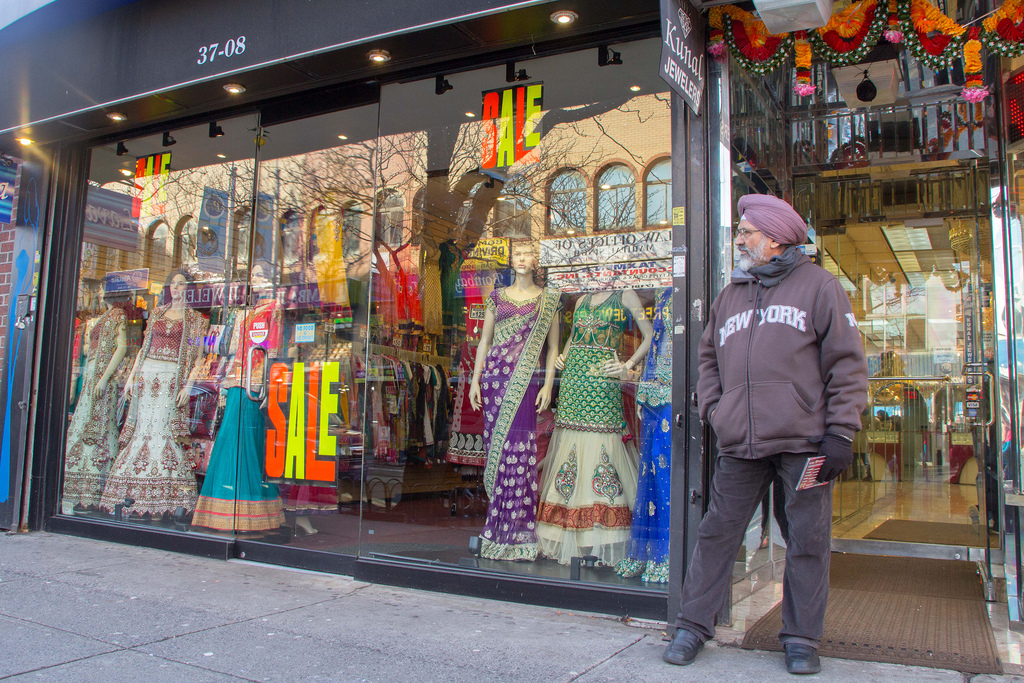 Oh to drape my flesh with the rippling silk of a turquoise sari, gold-flecked above a peek of bare midriff, my eyes kohl-rimmed, hair hennaed, feet sandaled now but also in winter because I carry the subcontinent within me, I shimmer its heat as I stroll down the block to the sounds of Punjabi pop from sidewalk speakers.

And oh, to know each of the 34 jewelers by name, not just the Sikh on the corner whose display board dangles “costume” earrings fit for Bollywood’s version of a Cecil B. epic. I’d stride into the 22K-real-thing emporiums, bartering pleasantly, skillfully in one of 2,000 Indian dialects or Urdu or English, that great unifier of the Raj, departing triumphant in my gold filigreed bracelet five inches wide that delicately chains my wrist to a matching ring while popping the eye of every beholder.

And when will I know the names of the gods and goddesses greeting passersby from their places of honor in shop windows, the flute players and monkey gods, the three-headed dogs made of brass, bronze, and hand-painted china? Once I was tempted to bring home the four-handed, smiling, pink-headed elephant god that Google later told me was Ganesha, the Lord of Success, beloved by merchants and entrepreneurs.

Food is consolation for more than ignorance, so I plunge into Patel Brothers supermarket, site of the long-gone F.W. Woolworth’s. But as a dazed foodie in culinary Xanadu, wishing for a guide, I face only more questions. I  wander aisles packed with tamarind, mango crates, ten-pound sacks of basmati rice, pistachios and cardamon, Ceylon tea and out-sized, other-worldly vegetables when the sight of a cobalt blue bottle jolts me back years to young-married me. I’d been working my way through an international cookbook and was determined to precisely follow the recipe for firni, an Indian dessert. Tracking down the elusive rosewater ingredient beyond my native Queens—what was then Wonder Bread country—brought me into unfamiliar neighborhoods and grocery stores. Eventually after many subway journeys to distant lands, I found success.

Now here it was before me again, the treasure I’d spent so long searching for– the identical jewel of a bottle, the same flowered label. I had to have it, for the present as much as the past. My obscure object of desire had come home to Queens.

Maria Terrone is the author of the poetry collections Eye to Eye (Bordighera Press, 2014), A Secret Room in Fall (McGovern Award, Ashland Poetry Press, 2006) and The Bodies We Were Loaned (The Word Works, 2002), as well as a chapbook, American Gothic, Take 2 (Finishing Line Press, 2009).