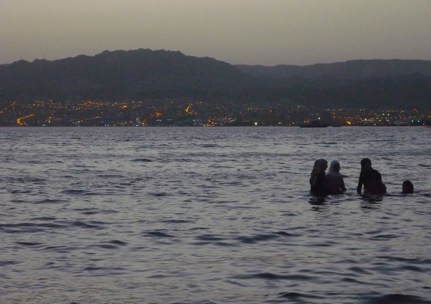 In Aqaba City, on the Red Sea, between the stretches of swanky apartments and big names hotels is a tiny squeeze of shore called Shatt Ghandoor (Ghandoor Beach). On Fridays and holidays, Ghandoor is a picnic ground, amusement park, beach, and public bath all in one.

The shore is packed with families, the parents keeping watch over the children who have scampered to the sea. Sellers of tea and soft drinks, ice cream and roasted seeds, flip flops and straw mats cajole and bargain. A tall man in red top and pants carries half a dozen plastic ducks on his back. He is a bulldozer of a speaker in that endearing Egyptian dialect, joking, reciting, greeting, performing. His voice is big, fills the air, rises above the din of the radios and CD players.
The Red Sea is gentle, rippling with the wild chirp of children. Girls in traditional Muslim attire are floating on their backs; others are splashing each other with water, falling to the waves with laughter and abandon and then straightening up again. Others still, mostly men, are swimming out into the open waters. A couple of fishing boats here, a cargo carrier there in the distance, and very far away, touching the horizon, a large mass of a military ship.

A boy, plump with large eyes, and his sister are playing with an inflated plastic tire, the boy conscious of his renegade swimming suit which keeps slipping down to reveal the cleavage of his bottom. He often turns toward the shore, looks in our direction where his father is seated on the sand next to us, keeping watch over his children. The boy, it seems, wants to be noticed. We strike up a conversation, about his family, Aqaba City, future plans for this stretch. He offers us sliced oranges. We wave at his children in the water; they smile and wave back.

This stretch of the Red Sea will soon be the site of yet another row of luxury hotels, we are told. The people of Shatt Ghandoor will have disappeared. As they have done with the rest of the shoreline, soon the monsters will come in from the land, close the area to public access, snatch this vernacular joy, and throw it under concrete and steel, taking with them the sky.
Taline Voskeritchian’s work has appeared in American Literary Review, Ahégan(Beirut), London Review of Books, The Nation, Agni Review, Book Forum, Words Without Borders, and more.