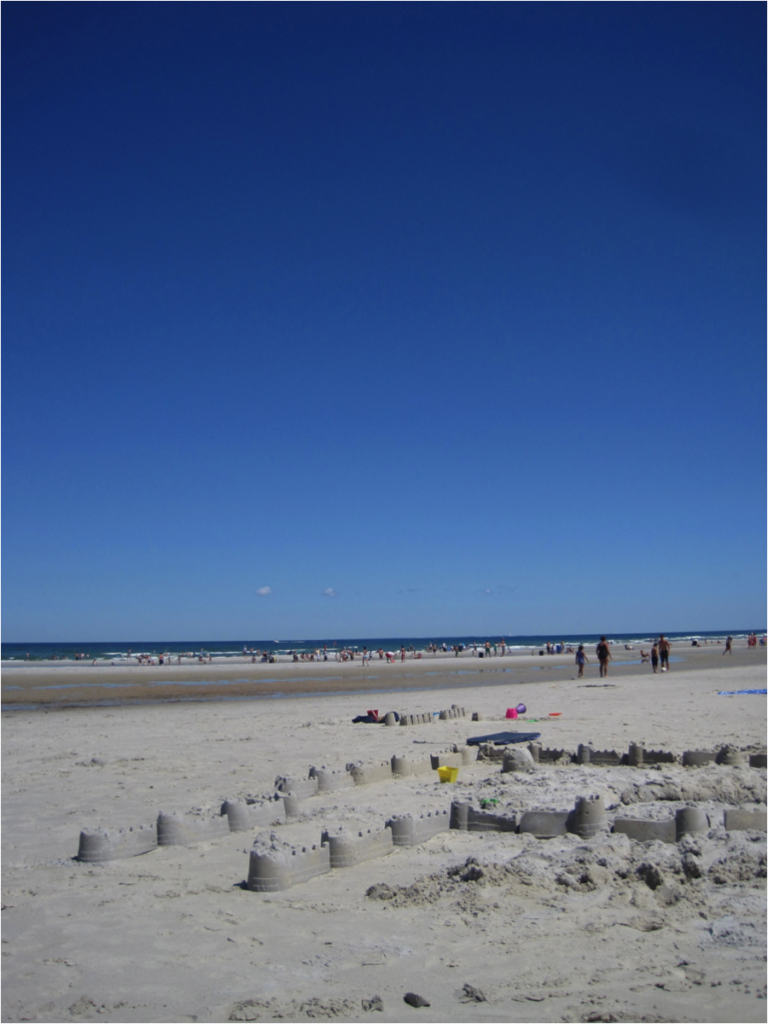 Our shift started at 6:30, too, with a sobbing baby whose gums were bleeding and sore as two determined molars pushed their way to the surface. We had timed our beach visit to occur after his morning nap, but why not just head to the beach as soon as we could? If we had learned anything from our first year of parenthood, it was that life was easier when you followed the baby’s lead.

We arrived the next day a little before eight and sailed right into the lot, which was starting to get crowded—and not just with young families, as I had suspected. There were plenty of mini-vans, yes, but there were also young couples and college kids and retirees. The concession stand was already open, selling coffee and bagels. A crisp wind was blowing and most people wore warm clothes over their bathing suits. When we got onto the beach, we saw rows of teenage girls dozing on the dry sand on higher ground, some of them already sunning themselves but most wrapped in towels and blankets. Older women kept watch nearby, sitting in folding chairs with to-go mugs and paperbacks in hand. Farther down the beach, where the sand was hard-packed, extended families and groups of friends were setting up camp for the day, arranging coolers, umbrellas, folding chairs, even pup tents. It was two hours until low tide and the ocean was still receding, revealing more and more smooth sand. No one was swimming yet, but a few toddlers were sitting in shallow tidal pools, where the sun quickly warmed the water. A little girl was unspooling a kite, which my son pointed to, delighted to realize it was connected, somehow, to the girl’s hands. 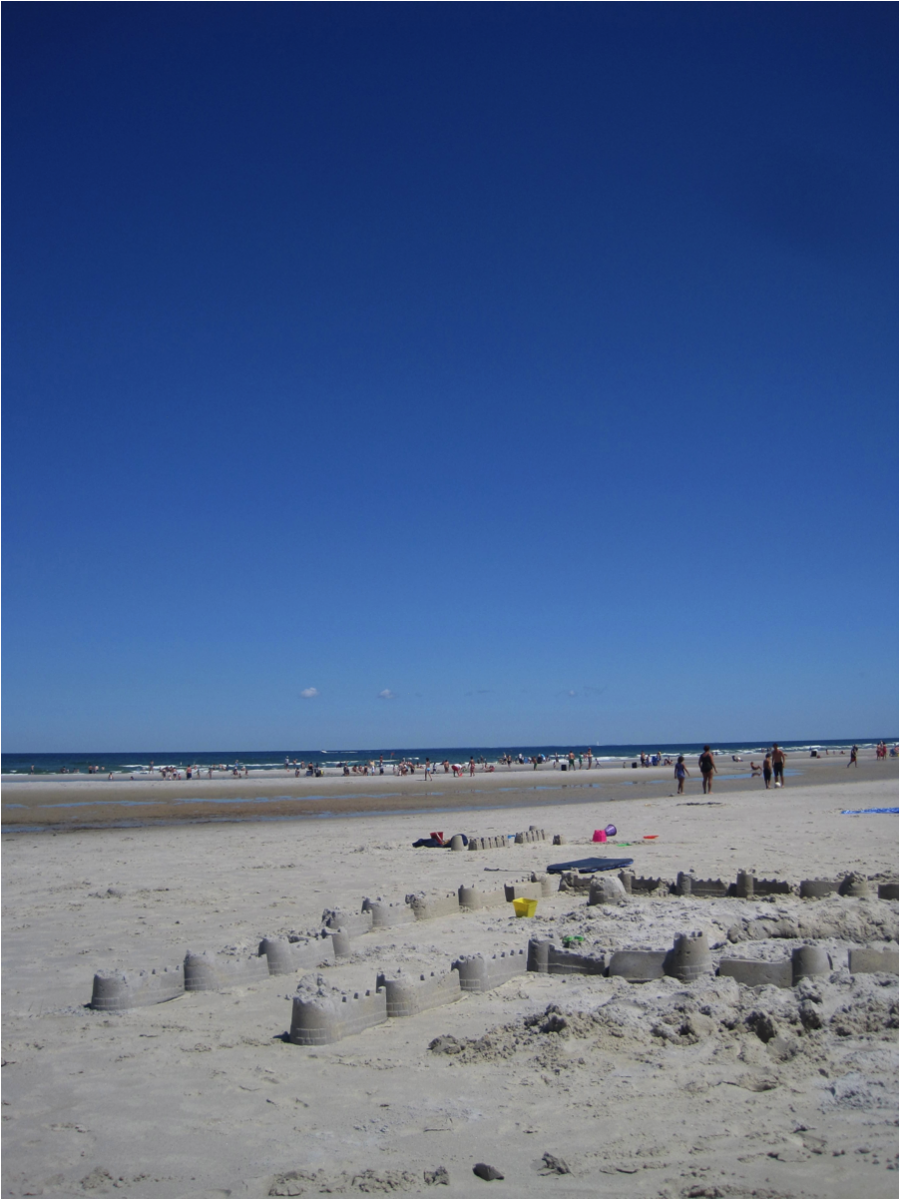 Mayflower Beach is located on Cape Cod bay, one of the dozens of gentle bayside beaches that make the Cape famously family-friendly. During previous trips to the Cape, I had always ignored the bay beaches, preferring the Atlantic side, where the waves are stronger and the water is bracingly cold. I like to swim, and you can’t really swim in the bay beaches, which are shallow, and where the tides recede for several hundred yards. But on this trip I fell in love with the bayside beaches: for their clear, warm water, for their fine sand, for their wildlife, but most of all, for the way people used them.

Many beaches are “scenes”, places for people to show off their youth and beauty, their athleticism, their glorious tans. Mayflower Beach was a scene only in the sense that people seemed to be acting out scenes from daily life, as if the beach were a massive, shared living room. Every stage of life seemed to be represented in its sweetest and most ideal form. There were old couples walking hand-in-hand and old friends laughing in lounge chairs; there were fathers and sons building sand castles and mothers and daughters searching for sand dollars; there were cousins playing badminton and grandparents kneeling alongside toddlers; there were packs of teenagers and tribes of ten-year-olds, kids who had known each other for years and some who had just met that day.

One early morning during low tide, I watched as a young man directed his girlfriend to stand in the ocean up to her waist. There was no one else in the water; in the photo’s frame she would look like the only person on earth. And for him, she was. I thought, not without some disappointment, that these were the kind of photos my husband might have taken of me, when we were on vacation together, just the two of us. And at the same time I relished my current role, as a new mother whose almost-one-year-old baby was snuggled to her chest, dozing off in his carrier. Was this how life would continue, I wondered, an accumulation of sweet regrets as I slipped out of one life phase and into another?

The tide was a backdrop to all this—to all these thoughts. It receded so slowly and yet so dramatically. When we arrived at the beach that first day, it seemed impossible that the water would eventually rise to the soft sand where the teenage girls slept and the older women waited with their pulp fiction and their coffees. As the tide receded, people spread out more and more, chasing the water’s edge; but at some point the dynamic would reverse and the water would begin chasing the people. The ocean, however, was a stealthy opponent; I would stare at it, knowing the tide schedule, trying to watch it come in. But it wouldn’t budge. Then I would become consumed in some activity—building a sandcastle or reading the newspaper—and when I would look up, the water would suddenly be much closer, just a stone’s throw from our towels.

I never got to watch the full drama of the tides because we always left shortly after lunch, to return home in time for our son’s afternoon nap. But one day we decided to stop by the beach before dinner, just to see what it looked like at high tide. It was a completely different beach, with everyone crowded on the narrow banks of dry sand close to the parking lot. The sun was lower in the sky and the water had a darker cast to it. The wind was back and the waves were stronger, but the water was still shallow and warm and full of swimmers, with people spread as far and wide as they had been on the dry beach. There was a feeling of urgency in the air—the need to get one last swim in before nightfall. According to the tide tables, the tide was actually starting to go out. But you couldn’t see it. And when I joined the other swimmers, I found it hard to believe that I was floating above sand I had walked across that morning.

Hannah Gersen is the Dispatches Editor of The Common. Her fiction has appeared or is forthcoming in Crab Orchard Review, Granta Online, North American Review, and The Southern Review, among others.