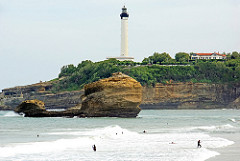 We took the twelve-thirty train and got into the Biarritz station just after six. There was a bus schedule nailed to the wall, but the train ride had been smooth and I didn’t want to spoil our momentum, so I waved to the first in a row of taxis and offered the driver ten euros, which was quite a lot for me in those days. Probably there was a flat rate to the center of town, but the driver looked at the thin crowd coming off the train and at Katja, who was wearing espadrilles, and said ten would be okay, once he’d finished his cigarette.

On the drive in, Katja leaned against the window and didn’t say too much. The landscape was gray and battered. It was April, but winter still had a grip on everything: the low sun and the farms, with their lean cows, and the roads, which were scarred by fissures.