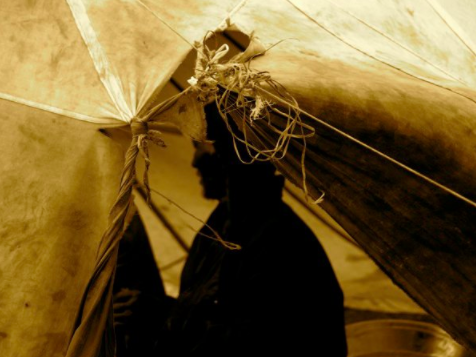 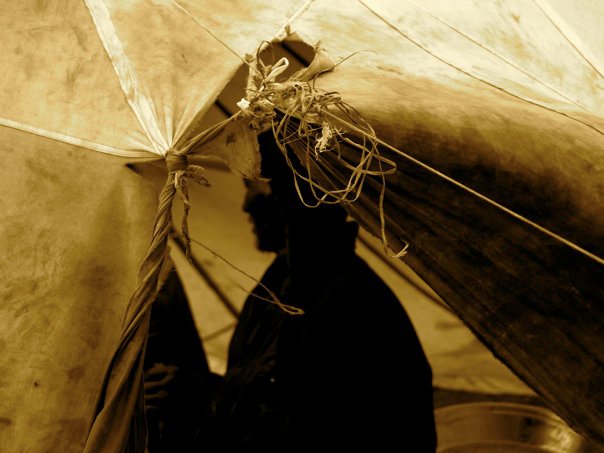 Delhi, Dharmshala, McLeod Ganj, Dharmkot. New friends and newer friends over masala chai. Deodar forest in rain. Mist rising. Monkeys on a cold tin roof, scorpions in the corridor, beetles inside clothes, slugs the size and shape of fallen leaves. Clean, spare, sharply elegant—Vipassana. Silence. Thank you for all the blessings, they came in handy. 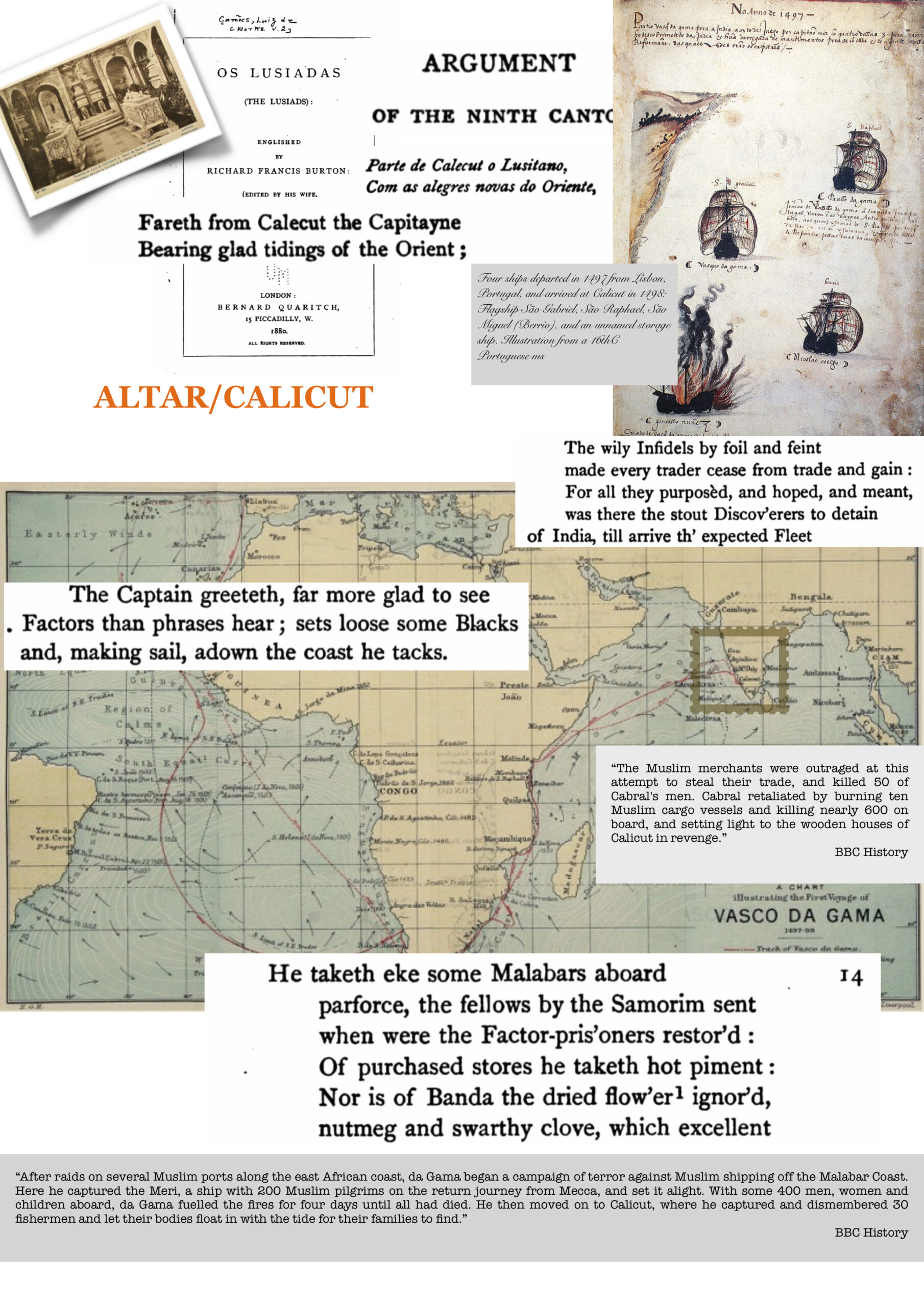 India, The Church of Our Lady of Hope

Words and images by KANYA KANCHANA

Aśānti is a Sanskrit word that means disquiet, disorder, unrest.

Disquiet could describe the nebulous feeling the call for works from and about the ‘Lusosphere’ evoked. Though technically longer, the Portuguese rule in India was somewhat overshadowed by the more well-known and influential British imperial rule, so much so that time has almost cast a fond patina over it. It was not, however, all pastéis de nata and cashew feni.

I wanted to bring together the various historical events and connections into a matrix, a visual architecture, a church of four parts that one could explore. The piece works as a procession through four places, three of them politically and geographically significant for the Portuguese rule — Calicut, Bombay, and Goa — and the last, a space within the mind.

This is how it began. In 1498, Vasco da Gama landed the First India Armada at Kappad beach, Calicut, in the Malabar Coast of southern India. He had opened up a sea route to India, ostensibly for spice trade, but had charted a course to a new global imperialism. Two years later, the Second India Armada under the command of Pedro Álvares Cabral followed, and then there were more.

In 1572, Luís de Camões, considered the greatest poet of Portugal, published Os Lusíadas celebrating Vasco da Gama’s victorious voyage, with the heroes favoured by none less than Jupiter and Venus, and the East represented by Bacchus in the guise of a Moor. This bloody hagiography became Portugal’s national epic.

The Mughal threat from the north was looming large under Emperor Humayun. The local Muzaffarid ruler of the Gujarat Sultanate, Sultan Bahadur, thought it wise to have the Portuguese on his side. In 1534, he signed the Treaty of Bassein and ceded an archipelago of seven islands they called Bombaim to the Portuguese.

But the British had long had their eyes on this strategic natural harbour splendidly sheltered from attacks by land, one that would help them compete with the growing Dutch power. The solution: royal matrimony. It took a while, but in 1661, Charles II, King of England, made a royal arrangement with Alfonsus VI, King of Portugal, to marry the latter’s sister, Catherine of Braganza. Her dowry: Bombay. Presumably, many cups of tea were had and no one was shoqued.

Goa Dourada. “He who has seen Goa need not see Lisbon,” they said.

St. Francis Xavier, Catholic missionary and priest, had established himself in Goa. He travelled extensively, bringing ‘lost’ Portuguese settlers back into the fold and converting natives. He died in 1552, but his missionaries in Abyssinia, India, and Japan wanted to spread the word in his wake, and they needed printing presses. In 1556, a ship carrying one such press set sail from Portugal, rounded the Cape of Good Hope, and touched Goa in the hope of continuing on to Abyssinia. But things went wrong in Abyssinia and the press never left Goa.

Four years later, based on a much earlier request of the same Francis Xavier, the Inquisição de Goa, the Goa Inquisition, was established to counter other prevailing religious faiths. Natives — Hindus, Muslims, Jews, non-Catholic Christians — accused of heresy were forcibly converted, imprisoned, starved, flogged, and burnt at the stake in 71 public “acts of faith.” Local languages were suppressed and books burnt. Vasco da Gama, with his pioneer’s foresight, had smoothed the way all those years ago and obtained a Papal Bull Romanus Pontifex that gave Portugal the monopoly, patronage, and responsibility to propagate the Catholic faith in their areas.

Some three centuries after the death of Luís de Camões, Fernando Pessoa emerged into the Portuguese literary scene. Highly influenced by Camões, Pessoa was prolific, writing under his own name as well as seventy five other names he called his heteronyms. The Book of Disquiet, an unedited fragmentary collection of his writings, was published posthumously in 1982. To this day, his spirit pervades literary Lisbon. But what about his own contribution to the disquiet he felt?

A legitimate passage in the “autobiography of someone who never existed,” the absurd hubris of an assistant bookkeeping clerk in a Lisbon fabric company, or the ironically non-self-aware authorly affliction that did not succumb to being written about?

Vasco da Gama, Luís de Camões, and Fernando Pessoa, heroes and poets all, continue to confer eternally at the Jerónimos Monastery in Lisbon.

Kanya Kanchana is a poet from India working on her first collection. Her poetry has appeared in Poetry, Anomaly, Asymptote, and elsewhere. Her translations have appeared in Exchanges, Asymptote, Waxwing, Circumference, Aldus, and Muse India. Her flash fiction has appeared in Litro and Paper Darts, and is forthcoming from The Conium Review. Her work was shortlisted for the 2019 DISQUIET Prize and awarded a 2018 baseCollective Residency Scholarship. Kanya is also engaged in practice, teaching, and Sanskrit philological research at the intersection of tantra and yoga and is currently doing her MPhil at the University of Cambridge.