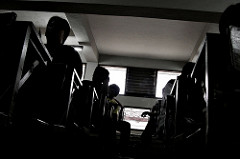 Avenue Mohammed V is silent and desolate this late at night, empty apart from a few stray cats meowing like newborn babies; it’s a creepy sound. Then a she-dog ambles up, stops in front of me, and raises her tail at a black male dog limping past. A single bark of seduction from her and he’s mounting her. They’re cleaved to each other, clinging on, and she shuts her eyes in ecstasy, surrenders to his movements. A delicious tingle runs through me. How lucky they are! They do it in public. They’re shameless—as the saying goes, “Not only God sees them but his servants do too.” They don’t have to worry about a police patrol, or about what people will say.