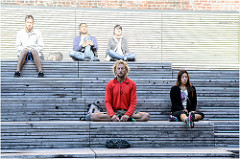 By PHILLIP LOPATE
When, in June 2009, the High Line Park opened to the public, it was declared an almost unqualified success. Some architecture critics nit-picked the design, but basically they endorsed it, and ordinary folk (I include myself in that category), less fastidious, greeted it with enthusiasm. Crowds lined up for hours to have the elevated promenade experience, it became a (free) hot-ticket item in New York City, which typically over-embraces a novelty for six months, then ignores it. Especially in hot weather, the challenge soon became to grab one of the reclining benches on the sundeck and tan yourself for hours, while envious masses stumbled by. The crowded, restless carnival-grounds movement of the park-goers above-ground rhymed the pedestrian conveyer-belt effect of the gridded streets below: Manhattan is a place where loitering in one place is done at your peril. Paris has boulevard cafes for cooling one’s heels, Rome comes to a rest at fountains and piazzas, but in Manhattan you keep moving forward. Well and good: I approve.

New York City is too infinite to have a center, too hot-and-cold to locate its putative heart. But if one place can claim a measure of symbolism for the metropolis, it is City Hall and its adjoining park. Surrounded by Park Row, which once housed the legendary newspapers of James Gordon Bennett, Horace Greeley, Joseph Pulitzer, and William Randolph Hearst, and now plays host to more contemporary media via J&R’s Audio/Computer World, by that majestic cathedral skyscraper, the Woolworth Building, with its beige and taupe terra cotta cladding, by the muscular Municipal Building, a McKim, Mead and White wedding cake of Stalinist-architecture bulk, abutting the on-ramp to the Brooklyn Bridge, by the ghost of what was formerly Ellen’s Coffee Shop, run by an ex-Miss Subways, and by the masses of civil servants on lunch break, shoppers frequenting bargain discount outlets, and criminals paroled from a nearby jail, the Tombs, all strolling up Chambers Street—City Hall itself is both grace note and anomaly.