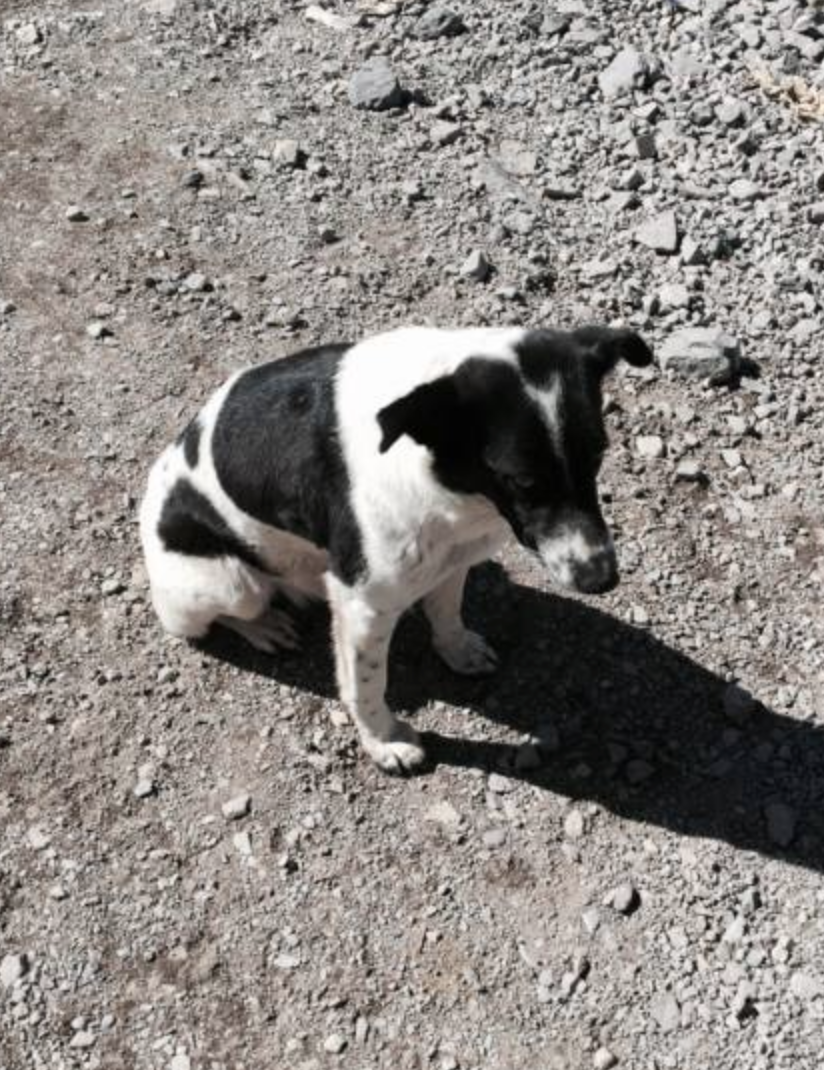 An hour from Marrakesh, a car delivers my friend and me to Imlil for a day-hike in the High Atlas Mountains. Judging by the heavy-gauge North Face jacket and ice-climbing boots worn by our guide Abderrahim, it’s clear I’ve miscalculated trekking in Morocco in February. I scan the snowy peaks and wonder how I will fare in my paltry jacket and no hat. And there he is. He sits patiently, about five feet from me, looking timid and cold. His head tilts downward, and although there is no eye contact, I sense he knows I’m there. I’m overtaken by a swell of tenderness and yearning, and I say to my friend, “I think this guy just AirDropped me his heart.”

I have fallen for a dog before, one whose face or spirit or gentle demeanor draws me in, but it was not like this. This time, it is instantaneous, maternal, and heavy with the twin aches of sympathy and empathy. Not to mention need. My grown children are away at school, and I am desperate for their company. My mother is in her new dementia facility, babbling with the same mouth once coated meticulously with Revlon’s Love that Pink, the mouth she kissed my forehead with, tasted the spaghetti sauce with. When I see this beautiful creature, I am not thinking of how supple a muscle is the human heart and how quickly it makes room for what it requires.

He is a handsome dog, medium-sized and in need of a brushing and a bath. When he approaches me, my arms twitch with the urge to pat his black and white coat, so I reach for the dark matted fur behind his ears. He looks up and I swoon over his expression of sadness and devotion.

“That’s just how dogs look!” says my friend. “Look how his tail is wagging.”

“Does he belong to anyone?” I ask Abderrahim.

“Does he have a name?” Abderrahim shakes his head. Now he does. Gus, same as my dog at home, the sweet boy we bought in an attempt to fill the void when the kids grew up.

He trots alongside as we set forth. Abderrahim hands us ski poles and having noted our pathetic outdoor gear, offers, “How about we cross the valley and have a meal at my house? It’s still a decent hike. I think you will like it.”

On the uneven trail, we cross the riverbed and I slip on a wet stone. Gus stands by, concerned. The land opens up before us, and once in the brightness of the ravine, the snowy path turns to packed desert sand. I drink in the spectacular scenery, the Atlas Mountains whose jagged folds rise up on all four sides. I throw a stick for him to fetch.

We arrive at Abderrahim’s terrace on the edge of another crowded village, and are served almonds, bread, honey from his apiary. He places a plate of popcorn from corn he grows out back onto the large tray. A stream of mint tea gets poured into glasses, and I cup mine with both hands. Above us, the graceful snow-covered cone of Mount Toubkal juts high into a deep blue sky. The air is almost warm now.

We give Gus bread and Abderrahim sets down a bowl of water. The dog curls into a pool of sunlight, plunks his head on my foot and begins to snore. He is content. I am content. At this moment on earth, I need nothing more.

“Come on boy,” I say. We begin our hike back through the valley that led us here, now a vessel filled with hard sunshine. He gets ahead of us and looks back frequently, checking on our progress. I dread the end of this day. There is no love as haunting as the one that is abandoned, and I know that he and I don’t stand a chance.

Up the path is a group of schoolboys and one of them throws a stone at Gus. The dog races back to my side. I am horrified at the adolescent cruelty. Abderrahim yells at the boys in Arabic.

“I hope they don’t mistreat him,” I say.

Back in the village, our taxi idles. At my ankles, Gus looks worried and sits at the side of the road. His head is down again, gaze fixed on the ground. I scratch his ears, say I love him, what an excellent boy he is.

We slip into the car back to Marrakesh. Out the rear windshield, I see Gus begin to run after us. The driver accelerates on the sandy mountain road and Gus accelerates too.

I look anyway, for two, maybe three tortuous minutes. He follows, follows, follows, keeping up. He does not slow his pace even as the road smooths out and our car gains speed. Finally, he stops. He stands in a cloud of dust churned up from the car and his beautiful head is raised high. We stare hard at each other. In his eyes I see every regret, every sadness, every loss, every desolate hour I’ve ever lived. While my heart cracks in two, I watch him turn around and disappear from sight.

Marcia DeSanctis is the New York Times bestselling author of 100 Places in France Every Woman Should Go (Travelers’ Tales, 2014). She is a frequent contributor to Vogue and Town & Country magazines, and has also written for Marie Claire, Creative Nonfiction, Tin House, Literary Hub, O the Oprah Magazine, National Geographic Traveler, Time, The New York Times, and many others.  She has been awarded five Lowell Thomas Awards by the Society of American Travel Writers for excellence in travel journalism, including one for Travel Journalist of the Year.

ShareTweetEmailPrint
2018 Dispatches Marcia DeSanctis Morocco
Take Me With You05.09.2018