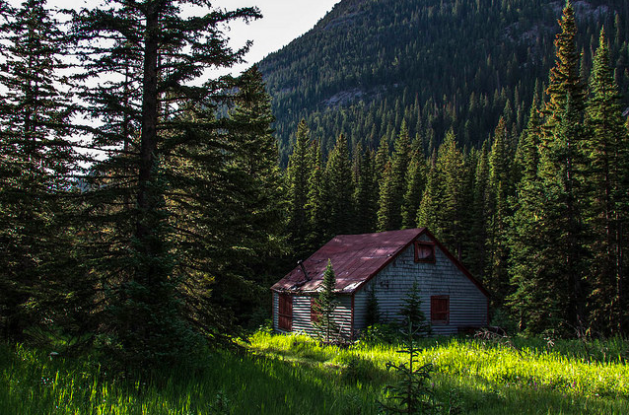 In 1964, as a kind of recompense for, or salvation from, moving us to the treeless, waterless plains of Minnesota, my parents joined with Henry, my mother’s brother, in the purchase of a cabin in northern Michigan, and for seven summers thereafter we escaped. It was three months of heaven after nine months of hell. I remember it, vividly; the memories are icons, glassed-in and shimmering like relics of the Church.

The fireplace: It was huge to my young eyes, probably a dozen feet tall and half a dozen wide. We were told that its construction included rocks from every one of the Continental states, and there was even a diagram mapping stones to states. Like the craftsmanship and beauty of the entire property, the fireplace was so imposing that we were shy of it, the reverse of pride, for we didn’t create it, we just happened to be fortunate enough to enjoy it and the cabin for our short time on earth.

The tables: In the dining room – a “great room” in today’s market – the long table and its plain benches had been handmade of oak. No ad in Crate and Barrel for “farmhouse table” will ever live up to the dark, worn beauty of that wood. Not that we ate there all that often. Breakfast, certainly, in little parades of cereal and toast brought in from the narrow galley kitchen and consumed at its near end. And on rainy evenings, there were large family gatherings with cousins and cards and bowls of popcorn. Outside was the place to eat, every chance we could, transporting braunschweiger and burgers to the little patio of brick next to the stone grill, and placing them on the other treasured table, a foot-thick round of redwood trunk, so heavy that it took all the males to bring it out from the shed and place it on its concrete pedestal, so precious that it had its own protective cover.  Our communion over hot dogs or canasta existed out of time, or completely in present time, take your pick, and none of the dogma of the past or money worries of the future were allowed in, not even when Grandma or her black-sheep sons from the East would visit.

The chandelier: A wagon wheel set out with light bulbs was suspended over the long table, which, along with the plain furniture and stone fireplace, gave the room a Western feel. We might have noted the irony had we stopped to analyze our position. Emigrants from Europe or suburban New Jersey went west to escape persecution or make a better life; we went east, although for only three months a year, and went west for the other nine months to live as outsiders. The wagon wheel was a not-so-subtle symbol of the precariousness of our years on the prairie, where the only sod my father busted was the occasional hide-bound tradition of the Christian Reformed School he ran.

The porch swing: The favorite activity of our family was reading. A small screened-in porch perfectly obliged, but only for one lucky reader. Its cushioned swing was a constant battleground as three boys fought for occupation rights, especially on Sunday afternoons when we weren’t allowed to do much besides read. The winner had two hours of bliss, lost in Hemingway, while the river, cutting away at a high bank just a few feet below us, rushed by. The losers were banished to a hammock outside, complete with mosquitoes, or to an area off the great room, complete with parents, and a seating choice of small worn couch or a granny chair with red plaid cushions and skirt tied with strings to its black legs. When my grandmother visited, she sat much of the day in that chair, flanked by windows, looking downstream. We loved her good spirits, her sly use of Dutch words in Scrabble, and the way she napped in the little red chair, such a contrast to the fierce and dogmatic woman from Grand Rapids who brought up seven children alone, after her husband died young.

The river pool: We swam in the unplumbed pool in front of the cabin only on the hottest days. It was a deep pool, over my head in places, formed by a partial dam of stones and a bend in the bank on which the cabin sat, providing a sheltered undercut and a fast run for our rickety log raft. A man-made peninsula at the end of the run served as a perch for my unending casts upstream in the fast water, where I lost scores of lures and worms trying catch the monster brown trout supposed to live there, trying to prove that I too was a man, a Nick Adams. On one magical evening, nearly dark, when the river was high after a rain and I stood chest-deep in the calm water above the next upstream pool, I almost did prove it, hooking the brown’s brother for a few pulsating seconds before he calmly broke my ten-pound test..

The Island and the studio: The Peninsula helped divert water through the waterwheel into a small channel (reputedly dug out by horse-pulled dredges), which rejoined the river a hundred feet downstream. On the banks of this little stream was a separate, one-room artist’s studio, where Henry, my uncle, stayed. It was an A-Frame with tall windows framed like a dacha by birch trees and overlooking the bit of land we all called the Island. The Island was the perfect setting for gardening and decoration: cold clear dancing water on both sides, the curving bridge, the ponderous waterwheel, the undeveloped woods across the river. But my parents left it wild, mowing a path down the middle to the end, and occasionally trimming back the forsythia, not trespassing in this little green Eden. When I did walk down across the bridge, on my way to enter the river below the pool (one had to sneak up on trout), I looked sideways at the big windows of the studio, hoping not to see Henry’s face staring out. It was a mystery what he did there all day long; he said he was writing poetry, but all we saw him do was tend a few flowers. He would come to the cabin for meals and the occasional game of Scrabble; but usually he left us right after dinner. Unlike his studio, which was full of light and Navajo rugs and twisted birch furniture, Henry was a dark man, and we were scared to visit him.

The woods: I walked through our woods almost every day to go to my job at the supermarket. It was nearly a mile up to Highway 37, the main road from Grand Rapids to Baldwin, where I would catch a ride with one of the cashiers. I never explored the forest itself; it was more like a buffer against the world than a part of it. Even though my family owned some six acres of trees, my mind stopped at the little garden of raspberries and green beans that the deer ultimately defeated, at the make-shift basketball backboard nailed to an oak, at the sign displaying our family names at the end of the driveway. I would leave the cabin in the morning with a sense of dread, as if toiling in a produce department was too much of the world, and return in the evening with a sense of peace and release.

The last relic: After a hard rain one night, the river turned brown and high. We raised the waterwheel out of the current, and my parents looked anxiously at the erosion of the bank on which our cabin stood. I stooped to fish with worms. On the flooded Island, the water lifted the long grasses at the edges of the shore and they floated and streamed like seaweed, like the hair of a drowned man, and Henry put on galoshes and went out to try to save his roses.