This is the second part of a three-part dispatch. You can read Pt. 1 here. The final installment will be published in January.

We were still night owls then, seldom rising early, but after the night we spent in Duluth, we wanted to enjoy as much time there as we could before hitting the road again. We woke at first light, dressed without showering, and drove back to the waterfront. The sun was rising on the lake, and we walked to the end of Canal Point where the lighthouse stood silhouetted against the water turning gold with the new day. It was it was in the low 40s, and we took turns posing, shivering and smiling while the other took a picture.

We walked through the deserted city that had been so full the night before, and drove again up the steep streets to look back down across the city to the Aerial Lift Bridge and the thin spit of land that crossed the end of the bay. In the quiet of the morning, while everyone else slept on what to them was just another Sunday, it seemed to us that all of the crisis and anxiety and excitement of the previous day was from someone else’s life.

We went back to our hotel one last time, showered, packed, and started another day’s drive. By then, the city had awakened, and people were outside everywhere — running, riding bikes, walking dogs, working in yards — and it seemed that they were all thrilled to be doing whatever they were doing. Nine months of bitter cold made those days of sun all the more precious.

We drove north along the two-lane highway that followed the shore of Lake Superior. Out the driver’s side window, narrow streams cascaded across rocks among stands of birch, while out the passenger’s side forested islands spread out into the deep blue of the lake. At home in southern Illinois, the heat had already set in for the summer, the sky becoming pale and hazy with the humidity, but here the horizon line was indistinguishable between lake and sky, the color resembling something only seen painted on porcelain plates. At one point the road descended and seemed to disappear into a wall of cloud miles ahead, as if we’d reached true north and could go no further. 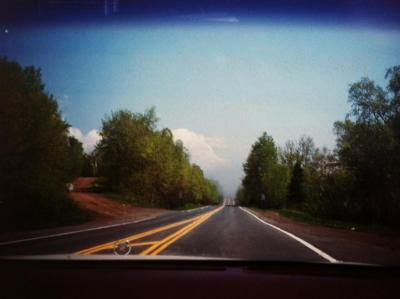 A friend had suggested we eat at the Angry Trout Café in Grand Marais, but when we arrived there we weren’t ready to stop. When my wife and I first started traveling together, both of us hated the routines that our families kept when going long distances in the car: drive for maybe an hour, then stop to go to the bathroom; then a half hour later, stop for lunch; then 45 minutes later, stop for gas. When we traveled together, we agreed the only stops would be when there was a quarter tank of gas at which point  we would eat and go to the can while the car was filling up. We were interested in covering ground. In moving from places that were known to those that were unknown. So we drove on.

We crossed the border without trouble, not having to show the birth certificates we’d gotten just for this trip. After we’d passed through, it seemed to us as if we’d truly entered another land. Now I wonder if it was because we were young, and we wanted to take note of all the foreign qualities, as if to prove we’d really gone somewhere. I remember driving along the highway, with distances marked in kilometers, and to the left there was an immense meadow full of wildflowers beneath a long stretch of wooded hills and that northern sky above all of it, and the only radio station we seemed to be able to pick up was playing Scandinavian folk music. It wouldn’t have surprised me if a girl with blonde braids appeared singing “The Hills are Alive”. We did see two people on bicycles riding along the shoulder, both wearing nothing but spandex shorts, their shirts removed and hung from their waists.

Catricia looked out her window intently as we passed. “No doubt about it.”

I smiled.  “Shirts off in Canada!”

She deadpanned Anthony Michael Hall in Weird Science: “Canadians. They have no morals.”

We were laughing and goofing in a way that we hadn’t in months. And then the hissing started from beneath the hood, then steam, then dashboard warning lights.

When we told the story later, we would always say, “We saw a woman riding her bike without a shirt and then blew an intake gasket.” But at that moment, we were pulled off the side of the road for the second time, even farther from home, in another country. Along with the tools that I carried in the trunk, I always carried a jug of anti-freeze and a jug of water, as well as a quart of oil, and automatic transmission fluid (which can always be used in lieu of power-steering fluid). This makes it sound as if I was prepared and forward-thinking, but we lived in a small apartment that had no storage, so the trunk of the car became a place for all auto-related items.

We sat for a while, letting the engine cool before adding water. I didn’t open the radiator cap, but instead started the engine and poured it into the overflow reservoir to avoid cracking the engine block. There were just eight miles to Thunder Bay.

I can’t remember how long it took us to cover that distance, but luckily our hotel was on the south end of town, and we came to it almost as soon as we entered the city limits. When we got out, I didn’t even raise the hood to assess the damage — just pulled our bags from the trunk and went to get our room key. It was a motel, and we were on the second floor directly above the parking spot where our busted car sat. When we got to the room, we just lay down on the beds and wondered what the hell we were going to do. Catricia said we should just try to sell the car and use the money to get a plane or bus ticket home. I laughed and said something about it maybe coming to that, thinking the whole time about how to get the car fixed. Looking back, I should have jumped at Catricia’s plan. Maybe it’s a youthful idea to think problems can be solved, things can be fixed, damage controlled, and it’s a sign of wisdom to know when to say, Fuck it, and take the path of least resistance.

So our first night in Thunder Bay we ordered Pizza Hut and had it delivered to our room in the Super-8 because our used Cadillac was broken down in the parking lot, which seemed about as American as a person could be. I hadn’t had a chance to exchange money, and paid the guy in American dollars, which he gladly took at a favorable rate of 1.75 to 1. We called home to Catricia’s brother who worked at a dealership as a mechanic, who said he’d call their grandpa who owned his own shop and had been a mechanic since the early 1950s. They’d consult and call us back in the morning. After that, we sat in silence, eating greasy pizza and flipping through cable channels. Nothing seemed interesting. Nothing that might lift our spirits or help us relish in the adventure of the whole fiasco. We kept flipping back to the adult channel where a film called Any Port in the Storm was playing. Somehow it seemed fitting.

James Alan Gill holds an MFA from Southern Illinois University, Carbondale. This is his ninth dispatch for The Common.

Photo by James A. Gill