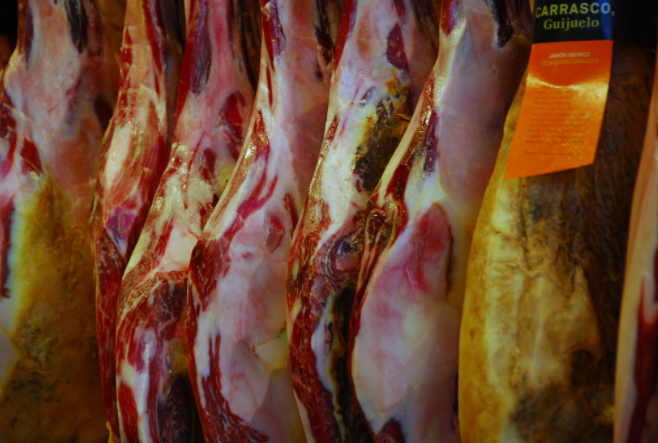 After the sad burger I had on our layover in Brussels, I vow never to eat so poorly again, at least not while in the European Union. As my girlfriend Ashley and I touchdown in Catalonian country, a craving comes over me that only meat of the reddest proportions, fish of the freshest means, and cuisine of the finest and oldest preparation can fill. Waiting at baggage claim can be so torturous after a long journey, but there I recall that most excellent bite of food from my last trip to Barcelona. The stand out. The thing that made me come back. The McFoie. It was at Carles Abellan’s restaurant, Tapas 24. A “foie gras burger” of veal sirloin and foie gras constructed to look like a McDonald’s hamburger, a touch of home for any American who grew up on the flat beef patty, two pickles, and dallop of ketchup. The McFoie came rare and juicy, and with an artisan’s touch, too rich to be eaten too often, but with flavor so profound that I found myself dreaming of it as my baggage arrived and my girlfriend’s did not.

After some heavy drinking with friends, we sampled the late night street fare along Passeig del Born in the Barri Gòtic. A baguette sandwich with Iberian ham, the baguette rubbed with garlic and tomato, no lettuce, no cheese, no additional condiments. Simple and precise flavors. Ashley said, “Hopefully this sandwich will get you to shut up about that McFoie.” Ah! And so it did! The sandwich managed to soak up the enormous gin and tonics they make in Spain (almost the equivalent of a Long Island Ice Tea both in size and strength).

For lunch, our friends Julian, Emily, and Oliver (their small child) take us to Jai-Ca, a classic neighborhood haunt where all the locals eat standing at the bar over trays of seafood that are constantly replenished. We order a few glasses of vermouth and select some of the fine Andalusian-influenced dishes by pointing. Razor clams, chipirones (fried baby squid, lightly battered), large prawns sautéed in olive oil and garlic, anchovies, cod croquets, patatas bravas, and pimientos de Padrón, my favorite small green peppers, the other taste of Spain I longed for. I believe this is what is known in Spain as vegetarianism, and it was nice to try it, if only for a day. After several drinks, we retreat to our rooms for siestas. Ashley’s bag arrived too, and just in time, because at lunch I had spilled a little vermouth on her last clean blouse. De nada.

It is becoming more and more evident to me that we aren’t going to have enough time to relive the McFoie at Tapas 24 since tomorrow we are due in Madrid. What solidified this for us was the enormous lunch at Seynor Parellada, inside the Hotel Banys Orientals on Carrer del’Argenteria. Parellada is famous for their classic Catalan cuisine, and we wanted to go big or go home. Turns out we went too big, and had nothing left for our last night in the city. What stuck out over the pan con tomate with anchovies and the silky, heaping, seafood and pork paella, was the veal Carpaccio. Cold, thinly sliced strips of veal livened by a coating of olive oil and blackened capers with a touch of sea salt. Meat doesn’t get any rarer when you’re eating it raw. I like to think of Carpaccio as a meat salad because somehow the dish is incredibly refreshing. After lunch, we endure a long siesta and don’t wake up until dinner time, still full from lunch. Oh well, McFoie, I already have a new flavor to hold me over till we meet again. Your rare cousin, Carpaccio.

There is no denying it. I am hooked on veal. I dread the plane ride home without it. First the Carpaccio, now the veal steak at Bardem’s. The actor’s family owns a restaurant, and a pretty damn good one. La Bardemcilla, in the Chueca district, serves the most tender cut of veal sirloin you’re likely to have in all of Madrid—and like Bardem, it’s beautiful to look at. They’ll even slice it up into little pieces, Elvis-style, if you plan to share as we did. Despite the movie posters that adorn the walls, the restaurant is by no means cheesy. It’s more like eating in Javi’s family kitchen where a proud mother displays her son’s achievements for all to see, as well as some family photos. The Bardems seem to have a good sense of humor about the whole “world famous” thing. And I’d like to nominate the bocherones (fried anchovies) for a best supporting role in this feast. Crisp, salty, vinegary, and by no means oily. Off by the restrooms, the Bardems allow you to write on their walls with chalk, and I compose a poem about veal which I title “Live Flesh” in homage to my favorite Bardem film.

Predictable? Maybe. But this being our first time in Madrid, we have to go out for the cochinillo asado (roast suckling pig) at Sobrino de Botin, a major tourist trap, old Hemmingway haunt, and the oldest restaurant in the world, supposedly. I always have my doubts anytime Guinness World Records is the authority on a particular claim, but seeing the oven for myself and the racks of roasted little sucklings on the wall waiting to be served, I tell Ashley with confidence: “We made the right choice, indeed.” I ask the maître d’ for Ernest Hemmingway’s table and I am greeted with a light chuckle. Though it was one touristy wish I wouldn’t mind coming true, I let it slide. Now the roast suckling pig may seem like all out barbarism to some. At Botin, the piglet is aged a mere 21 days (from birth) and then deemed ready for serving. That’s the way they’ve been doing it since 1725, and for this weary traveler, there’s no reason to stop now. We begin with a salad—a salad so uninspired and dry that only a place that serves serious meat dishes can produce. So we take it as a good sign. Peter Luger’s isn’t still doing business because of their Caesar. As I pick at my iceberg lettuce and lackluster tomato, I understand that we are in for some unforgettable meat. And then, our waiter, who has been serving the dish since before I was 21 days old, brings to our table two carefully portioned carvings of roast suckling: the belly, the haunch, and forgive me, I’m too enthralled with the serving to put it back together. The skin, a crunchy wall of saltiness that reminds me of the flavors of my childhood, a Filipino cookout at my Uncle’s farmhouse; the middle layer of fat—chewy and delicious; and the meat—moist and tender. Ashley and I say we’re going to stop so that we’ll have room for dessert, but instead, we devour each of our portions, satisfied, moved, a tad guilty, but ultimately happy.

Portions of this diary appeared in slightly different form in The Meatopia Recipe Book.