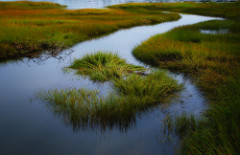 from The Pocket Encyclopedia of Revolutionary Violence, for the Years 1066-2092, vol 1, entry 1
The weir-trap is set. Iron stakes pounded into the bed of the saltmarsh arc from the blacksoil into the shallow reeds, straw crosshatching the stakes,  a water-net for the sprats and silver pike, eels, and the marshcray hunched among the reedbone husks in the mud.

Hereward the Wake has come to rest by a slice of sun-stone set at the shore, iolite refracting bluegreen. The sun is a bare grey ring behind the clouds. Hereward is hunting eel. He does not prefer eel to pike or sprat, or sturgeon or even the dry white flesh of watercray. But with eels he will go to the edges of the High Fen forest, the outlying burghs of Angelcynn and Gywre, and trade for browis-stew with boiled dove, and a deerskin shirt.

The water—silked dark under the grey clouds—bathes the weir-stakes. Hereward watches the silts and clays wash and spin. Gold-flanked roach eye the surround and flick away. Hereward will not return to Ely, the monk-burgh on the hill above the Fens, north along the black water crawling with weeds and phosphorescent-forewinged dragonflae. The water rushes north. Hereward follows it in his mind to the North Sea, glacier-clogged with great blue and dirt-smeared ice-mountains poured down from the freezing wells, the water frosted with the breath of the Dead, Hereward’s brothers, claimed by the Norman Raider. An eel snakes the reeds, thinner than a snake, knifing through the water, then strands against the crosshatches. Hereward brings his net down behind, sweeping peat, river-stones, small seafish lost in the twisted Fens, and loose grasses into the narrows. Smoke lifts from the cooking-fire at the Fen-shore. The afternoon sky leaks pale to the south over the grim behemoth of the wold, the penumbral tree-shadows mirrored in the shoals.

To the north, in Ely, the monks bustle in their island citadel, laying supper for the Raiders. Honeywine and herring, mutton in claypot, leather casks of creek-water gathered at the Beorhtnoth where the maidens washed Aethelthriths’s body after the first Raiders crossed the Fen. The Raiders adjourn to table, ask, “Where is Hereward?” They dangle gems and gold for the monks. Saliva pooling at their lips, the opal and gold is beyond the monks’ dry fingertips, rawboned hands telescoping out on threadlike arms, hands unhinging like gnarled keys from the heavy folds.

“You are our gysts,” the monks stall—our gysts (stranger and visitor in one phlegmy hiss)—“We will worry over Hereward later,” they say, and set out more food. Pickled crab and griddlebread.

“Where is Hereward?” the Raider-gysts ask again.

The Raiders put the gems away.

“Hereward crossed into the High Forest,” Gnorweith—thin and damp with perspiration, his eyes tracing the outline of the gems, now in Raider pockets—hastens to say. “He crossed the Fen to the south.” The gems come out again in red Raider palms, and eight sets of dark mechanickal Raider-eyes turn to Gnorweith. “There is a causeway to the south, eight tree-lengths from the edge of the wold, where the salts dry red on the wicker-reeds.”

Gnorweith swallows. He’s sure to be punished for his breach, but the Raiders have affected him beyond any God, or hierarch. He wants to become a Raider, or—that’s not quite right—he wants to become their mascot, their dog-monk, some slavering servant. He wants to kneel at their feet—he doesn’t know what he wants. But one look at the rough bearded invaders and Gnorweith had to be theirs. And now he will be theirs, for the elder monks of Ely will outcast him most certainly. Or perhaps murder him as he stands. Best to specify the manner in which to cross the causeway, then.

“When the sun-stone is violet—” intones Gnorweith “—violaceous, amaranthine, amethyst,” he trills, his eyes (on the nearest Raider’s codpiece)  a milk of sour, cloistered hunger.

Maerfald the eldest strikes Gnorweith across the back of the neck. “When the sun-stone is blewe,” Maerfald says, matter of factly, “then the water is low all the way out to the mor—there you can cross—Hereward has gone there.  He is one Sun and Moon ahead of you.”

Gnorweith’s eyes lift, his pale fingers going to touch the back of his neck.

So he has been struck for his desire—for his sputtering idiocy—not for his breach.2 They are all going to over to the Raiders. Perhaps some of them have long gone over. He casts his eyes over the elder-monks, noticing now the bulge of amulets around their necks, the clattering sound of metal bracelets under their sleeves.

All the monks, and all of Ely. They have all breached the trust of the  rebel Hereward.

As his sack fills with eel and the tree-vermin lose their fear of Hereward and shoot down from the branches to sip the Fen-water, the sun-stone sharpens to a purer blue, a clear bowl of poison color—electric, Asian extraction, like pressed indigo, thick dye pinched from the throats of Tamil snails off Bet Dawrka where many Saxon Ships lay sunken in the tidal floods, florets of coral, starfish, and night-blooming seaweeds housed in their wooden ceols.

It is time to cross.

Hereward is a predatory animal. He can barely stand to flee before the Raiders catch up to him—as they will soon, the monks have surely spat out all they know for the pleasures of gems and the smell of Raider flesh, the exhilaration of these new, earthly masters, lunched and full, arms flung out in afternoon sleep on the splintery abbey-pews. The fat eels tangle in his bag and Hereward must cross quickly to sell the eels while they still breathe. Still, he lifts the seafishes out of the boiling tun, scoops one bowl’s-worth of fatty-oil water and makes a quick soup to drink crouched at the shore. Then he walks exactly six tree-lengths plus one boot-length from the edge of the wold. The craven, lazy monks make imprecise maps, and the Raiders will curse them tomorrow as they pace back and forth, looking for the shallow causeway, sunlight flashing off the Fen in blinding pulses. Hereward slips among the reeds, water topping his boots, hair tangled in the humid air. He moves into the Fen. Cray skitter into the deeps.

Again and again the sedge and sweet-flag twist around Hereward’s ankles. And then tiny pops as he wrenches free, sending fronds to the surface, roots splayed and raw, lengthening along the iron-rich water (like a woman laid out on spring moss, dreams Hereward—dreams of her limp limbs stretching on the soft green mat, opening to him), then snapped up by the turtles that course along beside the Saxon rebel, their fat scaly feet pushing against the currents. Such are his flock, laughs Hereward to himself, looking down at the turtle-beaks breaking the surface, nipping at the broken sedges and at the dead skin that the watervines rough off his legs.

The forest invades the herbaceous Fen to the east. Tall pines and hemlock, an archipelago of trees zagging into the water. Each time the sun glints behind a tree, Hereward mistakes the shadow for a Raider and reaches for his Bow.

The forest pushes toward me like the Raiders, thinks Hereward. The forest is a Fen-Raider, starving the ancient Fen, drinking the mineral tidepools, sucking up the mud to pad its widening rootbed. The Fen—nurse of peat and eel, of tiny waterdeer with webbed feet, and of the redshanks, bird-waders of the morland (redshanks are a sign of well-being, the kinship of beasts and men with Erce, Mother of Earth—this according to Bede’s Leechbook, which Hereward has read)—the Fen is fighting, like I am fighting, thinks Hereward. Where are my Brothers.

Aethelthrith had died in the creek, and then Tonsit, Braevard, and their bands of Greenlander Sax ringed around Ely, protecting the town and the abbey, while the monks whispered their secrets to the Raiders—how to cross, where to cross, the secrets of the Fen, how to lay underwater, sipping air through a reed, to impale your foe from below, killing through the groin (to make men like brides). When the Raiders made a fence of his men like brides on stakes around Ely, Hereward had called the rest back, ordered them to flee to the High Fen, to lose themselves in the water-burghs—like wolves to dig for groundwater, like wind to drop down into the hollows, to live in the bogs like sawflies, dripping algae from their wings.

When he makes land on the other side of the Fen, the mor rising on broad green shoulders specked with dry purple flowers, snipe pitching and wheeling—grape-black birds, dark against the sky like bats—he lays down his sack and makes a weoh—sacrifice-stone—pulls one eel from his sack, says, saw wicca taecap—as the witches teach—and plunges his knife in, spilling black blood and white fats over the weoh. It is the first day of Blod-Monath—the month of sacrifice—and Hereward invokes Earendel—the morning star—Pundar—god of thunder—Tiw—god of war—and the Forest Elves, who he probably should not invoke (daemons, wights of the Wood), but Hereward is, shall we say, ultra-pagan—he is Heathen—and has fellowship with Gods and wights alike. For if Cofgodas guard the house (as even the monks would admit), what will guard the Wood, who will guard the common house of his men—for centuries, aeons, until ice crawls over the Fen, the blue shell of winter bury them until they are found, aeons until they are found. Spirits of the forest, Hereward sings, on his knees, Daemons protect us in our Wraecfaec—time of exile—until the Blodlaestid that will feed the earth, until the month of Bloodletting becomes our Time of Bloodletting and I split open the necks of the Raiders, those who take our common land and make it for their own houses—I with the elves, with my Brothers-Towaerd—and my Brothers-Now, who sleep in the Fen, moss growing over their backs, sedges for arms, will slay the Cofgodas—gods  of houses—will open the necks of the Raiders, and we will drink—the elves will drink, the redshanks, waterdeer, eels, Landfolk, grasses, roach and  the Sun-Herself will drink from the spigot of blood, and the Blot will run over the Fen, and we will feed, and be free.

Jordana Rosenberg is the author of Critical Enthusiasm: Capital Accumulation and the Transformation of Religious Passion,along with numerous articles and co-edited special journal issues.

ShareTweetEmailPrint
2013 Issue 5 Issue 5 Poetry Jordana Rosenberg poetry
They That Died in the Water, The Maidens Washed Their Bodies at the Shore05.01.2013