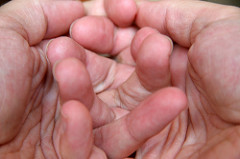 thread your fingers through whole hinges

if the opening is blocked if there is no new

no old moon in the window.

or have spilled a full glass;

eyes hurt from his being so used to the dark

being that a stranger against the light

who has thrown his shadow over yours behind the back weighs more than the house.

you will have moved

the sheet and the glass

half a sound, that’s a whole night.

Anna Glazova was born in Russia and now teaches and resides in Hamburg, Germany, and the United States. She is the author of three books of poems, the most recent of which was honored with the Russian Prize for Poetry in 2013. A scholar and a translator of European literature, she has translated into Russian books by Paul Celan, Robert Walser, Unica Zürn, and Ladislav Klima. A volume of her poems, in English translation by Anna Khasin, was published as Twice Under the Sun.
[Purchase your copy of Issue 06 here]
ShareTweetEmailPrint
2013 Anna Glazova Anna Khasin Germany Issue 6 Issue 6 Poetry poetry Russian Translation
thread your fingers through whole hinges11.01.2013