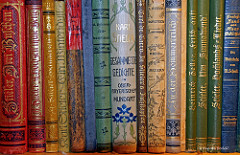 My father’s bookcase was divided by nationalities of the authors. “The French ones,” my mother would say with some solemnity, indicating the most considerable sector, and perhaps the one most congenial to her. Then came the Russians, preferred by my father.

The bookcase, pride of the family, occupied a room in our apartment, on the second floor of the building on via Volta in Erba.

The books, of all kinds, were safe-kept in custom-made cabinets, as if they were incunabula.

On my own I had found the set of Fabre’s “Memories of an Entomologist,” the ten volumes of the Sonzogno edition, which was to become my most beloved reading of those years.

In chronological order the last to arrive had been an encyclopedic dictionary with numerous illustrations. One of these, in glossy paper, reproduced Canova’s famous marble group, “The Three Graces,” naked, wonderful.

That summer, for our vacation, we’d gone to a mountain village, not far away. My father joined us on Saturdays for the weekend.

Near us a dance-band would play, with a violinist who wore a beret. People would dance.

I’d play bocce with my father. I partnered with him against other pairs of vacationers. My father was a great shot-bowler. Then the summer too ended.

The return home was rather surprising. I looked right away for the dictionary, which I found out of place. The page of the “Three Graces” seemed tampered with, altered by a thick shading, black, done in pencil, on the groin of one of the “Graces.”
Translated by Martha Cooley