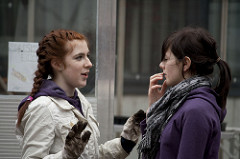 “Oh my God! I knew it! I always knew it. I was like Julie is so gay, & people were like oh, whatever, you just think everybody’s gay because it’s an all-girls school, but I knew I wasn’t gay, & I knew most of those girls weren’t gay, so I was like fuck you, Jasmine, go suck on one of your Jolly Rancher rings! Do you remember those? So, how’s it going? Do you have a girlfriend or something? I have to tell you in college I had a gay roommate, & she got lucky like every single night. Seriously. I’d come back to the room & there’d be some ribbon tied around the door, so I’d have to like hang out by the vending machines in the lobby looking like a total loser. I never saw the girls go, though. I guess they must have gone out the fire escape or something. Nobody thinks there would be that many gay girls in Iowa, you know, but I guess they’re kind of everywhere now. Do you still live on the West Coast or what? If I were gay, I would be like San Francisco, here I come, but truth be told, it’s kind of dirty. My boyfriend took me there once—we’re actually engaged so technically he’s myfiancé now, but you know, he wasn’t then, so—we just walked around a lot & got some of that good chocolate & saw the seals, & I was like hey, isn’t there some really cool old prison that you can see if you take a ferry from here, & then he was like San Francisco is full of fairies, ha, ha! I hope that doesn’t offend you. I mean, I thought it was funny, but my boyfriend is like totally down with gay people. He would really like you because you’re smart & it’s kind of hot when a girl isn’t into you at all, you know? Well, I guess you would want a girl to be into you, huh? So scratch that. But I mean most girls are always trying to get with him & then I have to be like whoa, hands off, that’s my man. Sometimes I think it would be so much easier to be gay. It would just take all the pressure off. I wouldn’t have to get my hair done or worry how my boobs looked, & if somebody called me fat, I could just be like I’m a lesbian, douchebag. I mean, seriously, do you even have to wax?”

Julie Marie Wade is the author of Wishbone: A Memoir in Fractures (Colgate University Press, 2010), winner of the Lambda Literary Award for Lesbian Memoir.