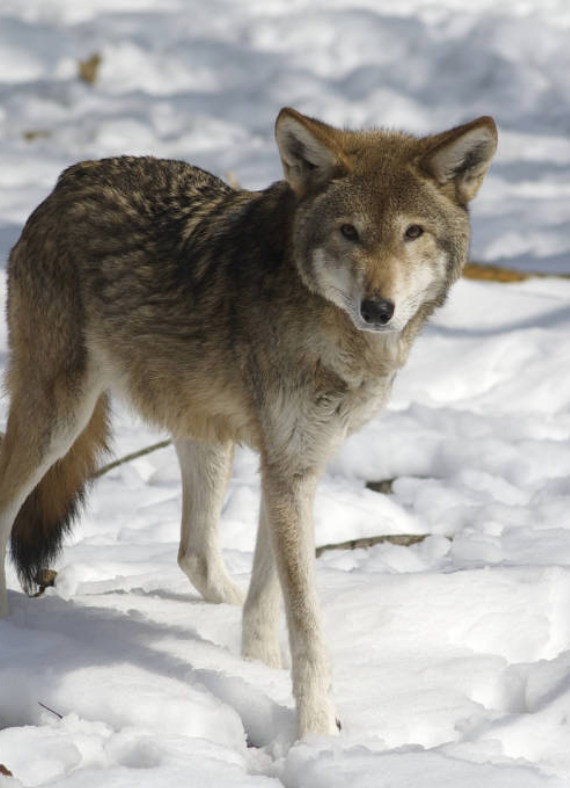 I met Peggy at a fundraiser in St. Paul. It was the kind of party where one could pose for a photograph with a live Peregrine falcon and chat with a famous Artic explorer. A few days later, when I wrote to Peggy for a formal interview, she countered with an invitation. I was looking for a few good quotes, but she offered an experience. There was going to be an exchange between the Wildlife Science Center and the Great Plains Zoo—one red wolf for another. Two brothers would go to sleep. One would wake up to an imported stranger, a potential mate; the other would wake up in a metal crate on Rt. 169, hurtling down the highway towards a new home in Sioux Falls.

I followed the others into the enclosure, clutching a long pole with a fixed Y at one end. Two adult red wolves flitted and flashed nervously against the back fence. We formed a line and lowered the poles like spears. We were a prehistoric hunting party with a local TV cameraman. We advanced slowly, herding the wolves into the northeastern corner. When they were surrounded, they laid down with their ears pinned back. It wasn’t their first rodeo. We moved in and pinned them down, several poles on each wolf, and Peggy administered the sedatives. After a few moments, the drugs took over and the powerful muscles relaxed. We lifted our poles and watched as Peggy placed blindfolds on the wolves to protect their eyes during the ride out. Suddenly, one of the wolves began to convulse and my mind flashed to an image of my son. I thought of the horror of the first febrile seizure—the way the world stopped spinning when he slipped away. Absence makes the heart grow fonder, they say. Peggy removed the blindfold and gently, intimately, stroked the wolf’s face and neck until the seizure subsided. She asked me to lift the wolf onto the sled. I asked her if I could stick around for the afternoon feedings.

Peggy’s boots crunched on the frozen snowpack and she gestured for me to step aside. “Let’s give this one a treat,” she said, waving the knife at the restless wolf on the other side of the chain link fence. Pulling apart the rear legs of the deer, Peggy glanced up at me and said simply, “This one was pregnant.” The incision opened a hole the size of a cantaloupe. Pushing up her coat sleeve, Peggy reached in with a bare hand and, after a moment, pulled out a bloody fetus. The wolf stopped pacing and stared intently at the flesh. She met the wolf at the fence and offered the fetus like the sacrament. The wolf received the gift and moved a few steps backward. Powerful jaws crushed the tiny skull and the severed body dropped to the ground. Blood stained the snow. As the wolf was alone in the enclosure, her face registered that familiar look of distant thoughtfulness, not unlike the way my domesticated canine chews the toddler’s toys underneath the coffee table. The wolf bent down and snatched up what remained. We picked up the deer and walked it to the next enclosure. It was as if a strong wind swept over the coals: the slow burn of yearning for connection to the wild suddenly aflame. Later that night, when sleep finally came, I dreamed of wild wolves.

Nathaniel Van Yperen’s most recent publication is “The Public Significance of the Private Farm” in The Land Speaks (Oxford, 2017). He is a Visiting Assistant Professor of Religion at Gustavus Adolphus College in St. Peter, Minnesota, where he teaches courses in religion and ecology, ethics, and race and religion. He is currently writing a book on wilderness.