Click here to read more about “Annals of Mobility,” a monthly column here at The Common.

Of Wes Anderson and his latest film Moonrise Kingdom, Geoffrey O’Brien wrote in the New York Review of Books:

To make a world where everything looks newly made is part of the great adventurousness of his work […] It is perhaps the only setting in which Sam and Suzy could begin to articulate their goal:  ‘to go on adventures and not get stuck in one place.’

Sam and Suzy are the film’s precocious, oddball protagonists.  They are 12 years old, and at particular odds with both the adults and peers around them. Sam is a skilled “khaki scout” and orphan, Suzy reads fantasy novels and is the daughter of attorney-intellectuals.  They discover each other at the local church’s holiday pageant, a theatrical performance set to Benjamin Britten’s Noye Fludde (in which Suzy plays a crow, and at which Sam pays an unwelcome visit to the girls’ dressing room).  Each immediately recognizes in the other a kindred spirit. 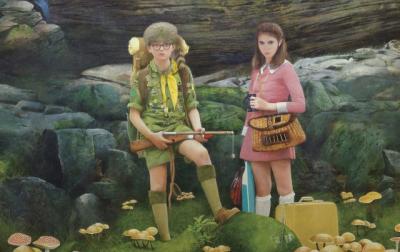 The story is set on an Anderson-esque (stylized, playful, a little creepy) New England island, and the two plan an escape—both gutsy and doomed, the viewer recognizes—to the island’s inland wilderness.  Along the way they do indeed have many adventures; and they discover Moonrise Kingdom, the magical cove where they dance, and read, and cook, and discover each other’s bodies, and feel, finally, at home, and free.

The film veers into territory both quirky and dark, but is imbued overall with optimism—or, perhaps more accurately, is allied with romanticism—and it is interesting to consider, at the film’s conclusion, how we are to feel about Sam and Suzy being returned to their domestic environments—Suzy to her well-meaning but imperfect parents, Sam to the sympathetic police chief, his new foster father.  Within these non-wilderness environments, they will mostly play by the rules, and are, as far as we can tell, “stuck in one place.”

In his essay, “Writer and Region,” Wendell Berry examines the ending of Huckleberry Finn and writes that ”the book fails toward the end […] it fails into a curious frivolity.” The bone he picks with Twain is that Tom Sawyer’s Aunt Sally is no Miss Watson.  Miss Watson, Berry acknowledges, is “an extremity, an enclosure, of conventional piety and propriety that needs to be escaped.”  But Aunt Sally is a different woman, a different sort of adult, altogether: she is “a sweet, motherly, entirely affectionate woman, from whom there is little need to escape because she has no aptitude for confinement.”  Why, then, does Huck flee?  Berry argues that Twain has stepped in, that it is the author, not Huck, who resists being “sivilized” and who “can’t stand it.”

At the end of this great book, we are asked to believe, or to believe that Huck believes, that there are no choices between ‘civilization’ represented by pious slave-owners such as Miss Watson […] and lighting out for the Territory.  This hopeless polarity marks the exit of Mark Twain’s highest imagination from his work.

I wonder: do we, today, also live in this hopeless polarity?  Approaching middle age, I think an awful lot about whether or not I am going to be “stuck in one place” from here on out.  The question—the fear—could be characterized as an adolescent one.  To say “stuck” is to say that staying put is a deficient, lifeless existence; like Sam and Suzy, I seem to see “adventures” and “one place” as mutually exclusive.  And according to Berry, this way of viewing stability versus mobility—that is, of exalting and romanticizing mobility—is a kind adolescent stuntedness, “a flaw in Mark Twain’s character that is also a flaw in our national character, a flaw in our history, and a flaw in much of our literature”:

It is arguable, I think, that our country’s culture is still suspended as if at the end of Huckleberry Finn, assuming that its only choices are either a deadly ‘civilization’ of piety and violence or an escape into some “Territory” where we remain free of adulthood and community obligation…We have imagined the great and estimable freedom of boyhood, of which Huck Finn remains the finest spokesman. We have imagined bachelorhoods of nature and genius and power: the contemplative, the artist, the hunter, the cowboy, the general, the president – lives dedicated and solitary in the Territory of individuality.  But boyhood and bachelorhood have remained our norms of ‘liberation,’ for women as well as men. We have hardly begun to imagine the coming to responsibility that is the meaning, and the liberation, of growing up.

Years ago, when I was living on the opposite coast from where my family lived, married to a man whose family lived an additional 3000 miles away, and signing a lease on the fifth apartment in five years, I became taken with Berry’s Port William series—nine novels and three story collections.  With each novel and story, we come to know intimately another branch of a small Kentucky farming community, three generations, over a period of almost a century.  The stories are beautiful, the characters unforgettable.  I was impressionable then, a little lost, hungry for wisdom and strong ideas. And I became convinced by the pervasive moral argument in Berry’s work:  that without continuity, without staying in one place and living life over a significant period of time, tied to a community—its people, its land, its triumphs and tragedies— you have not lived a fully human life.

And yet: even at middle age, I rebel.  Should the restlessness of adolescence necessarily be scorned by the intelligent, moral-minded adult?  Is the impulse to be in motion, to seek change and renewal, at any age, an “irresponsible” one?

It is Emerson who, for me, has always affirmed this rebellion. From “Nature”:

The sun illuminates only the eye of the man, but shines into the eye and the heart of the child.

The nonchalance of boys who are sure of a dinner, and would disdain as much as a lord to do or say aught to conciliate one, is the healthy attitude of human nature.

Our love of the real draws us to permanence, but health of body consists in circulation, and sanity of mind in variety or facility of association.  We need change of objects.  Dedication to one thought is quickly odious.  We house with the insane, and must humor them; then conversation dies out.

Every soul is by […] intrinsic necessity quitting its whole system of things, its friends and home and laws and faith, as the shell-fish crawls out of its beautiful but stony case, because it no longer admits of its growth, and slowly forms a new house. In proportion to the vigor of the individual these revolutions are frequent.

There must be a middle path (as a product of both Eastern and Western cultures, I am always inclined to think so).  For one, Esther Freud’s autobiographical novel Hideous Kinky comes to mind.  The five year-old narrator—presumably Esther herself—describes the year she spent wandering Morocco with her young hippie mother, who wants to “have adventures” and, eventually, find spiritual enlightenment. Mum takes up with various men, runs out of money and has her girls pretend to be beggars, allows her seven year-old (Esther’s sister) to live with near-strangers while she and Esther go in search of a Sufi master.  Young Esther is both anxious and enraptured throughout the novel, and from her viewpoint, Mum is disconcertingly unpredictable, but also beautiful, and loving, and fully alive.  The novel is not a revenge memoir, one could even read it as a love letter, to both Mum and Morocco.  They are on the move, they are having adventures; is Mum another iteration of Twain’s character flaw, suspended in irresponsible adolescence?  The adult author has chosen to give us the child’s view: No, no, she is not.  And yet the adult reader cannot help but think, Well, yes, a little. 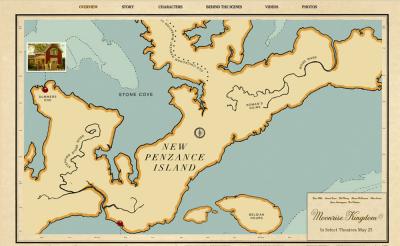 Sam and Suzy will be all right.  We feel this because they have proven both the power of their imaginations and their courage to act.  If they are physically “stuck” under adults’ roofs for another handful of years, they will make sure not to be stuck emotionally, or intellectually.  Suzy will continue to read her fantasy novels; Sam will paint Suzy’s portrait, and presumably others.  “Place” necessarily becomes metaphysical, a state of the soul, something we create ourselves, as Anderson has lovingly created his Moonrise Kingdom for Sam and Suzy, for himself, for us.  Moonrise Kingdom is ultimately a work of art about art-making.   And even Emerson, who urged us to see all, as “a transparent eyeball”—to aestheticize the everyday as a bulwark against complacency—would, I think, approve.  On art’s capacity for illuminating the ordinary, he wrote:

So we see the worth in things we had slighted these many years […] if that hour & object can be so valuable, why not every hour & event in our life if passed through the same process?

Not all of us were born, like Berry, into circumstances of communal continuity; many of us are indeed foreigners to “community obligation.” There are times when I wish this was not the case—I long for that continuity, for those ties over time.  At the same time, I can’t see how refusing to be stuck is the same as being irresponsible, or “solitary in the Territory of individuality,” or failing to grow up.  The wisdom of children is sometimes a startlingly mature one; it is that of the five year-old daughter who sees a terrible beauty in her mother’s quest for liberation: for how can we be truly together, responsible to one another, if we cannot each be free.

Sonya Chung, Associate Editor of The Common, is the author of the novel Long for This World (Scribner 2010) and teaches fiction writing at Columbia University.