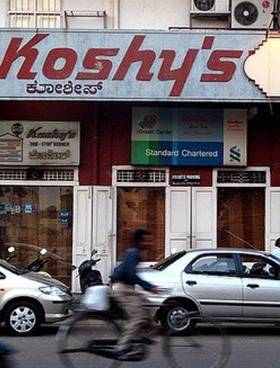 1. The most striking physical features of this city/town are . . .Bangalore is on a plateau and historians wonder why there is a town here at all, on this mostly flat, dry, upland setting right in the centre of the Indian peninsula, close to no sea or major river. Because the city started life as a small 16th century fort town to which a British contentment was tacked on in the early 19th century, and because it has expanded so dramatically over the last couple of decades, swallowing whole the villages around it, this city is really an agglomeration. The old British cantonment used to be a prominent center with its cafes, bars, bookshops and parks but now every area has its own shopping malls, restaurants, offices and, importantly though not always talked about, slums where the working class live.

2. The stereotype of the people who live here and what this stereotype misses . . .Critics claim that Bangaloreans are laidback and easy-going and that they have ruined the city because of these traits and let in too many “outsiders” who have swelled the population to a staggering ten million, from half that number twenty years ago. But I feel that Bangalore’s mixed and largely young population is the reason for its energy, its openness to new ideas, its liberal outlook. It remains, despite some serious urban problems, the nicest Indian city of its size to live in, certainly for women. It has developed a number of interesting and independent arts spaces over the past decade, it is still green in some parts, and it has the largest number of bars per square kilometre in a country where most other states enforce some measure of prohibition!

3. Historical context in broad strokes and the moments in which you feel this history . . .We are so obsessed with the new in this city, so impatient with the old, that it’s sometimes hard to remember that the city has a past. Bangalore was not one of India’s grand colonial cities – such as Bombay, Delhi or Calcutta – and, architecturally, one experiences only glimpses of the past – in the crowded lanes of the old, pre-colonial town and the remains of its small fort, in the handful of British-era bungalows and the later art deco buildings that still remain, in the lakes that were once built to provide water to the city, and most of all in those people who still, in their daily habits of prayer, eating, dressing and socialising, still follow an older way of life.

4. Common jobs and industries and the effect on the town/city’s personality . . .Chat with someone on a plane or a train and the minute they hear you’re from Bangalore they’ll ask you which IT company you work at. Bangalore is seen as a city of overworked and overpaid tech professionals who like to party single-mindedly in the weekends, only shop in malls, have pushed up the real estate prices, and brought a spirit of sometimes glib cosmopolitism to urban India. Bangalore is also the country’s start-up capital and that too has become part of the way people perceive the city – as the place where entrepreneurial ideas can flourish.

5. Local/regional vocabulary or food? Of all the many local or indigenised foods popular in Bangalore, from dosa to chaat, my favourite is Gobhi Manchurian, a faux-Chinese, uniquely South Indian snack of fried cauliflower spiced with Indian masalas, soaked in soya sauce and monosodium glutamate, locally known as “tasting powder,” garnished with spring onions – and sometimes colored a wicked orange to ensure perhaps that no one mistakes it for a healthy dish. It has been a consistently popular bar snack and street food though now with people from all over the country pouring into Bangalore one can get a lot more – from the Himalayan momo to the new Bangalore obsession, American-style fried chicken.

Anjum Hasan is the author of five works of fiction and a book of poetry; her latest publication is the collection of stories A Day in the Life.