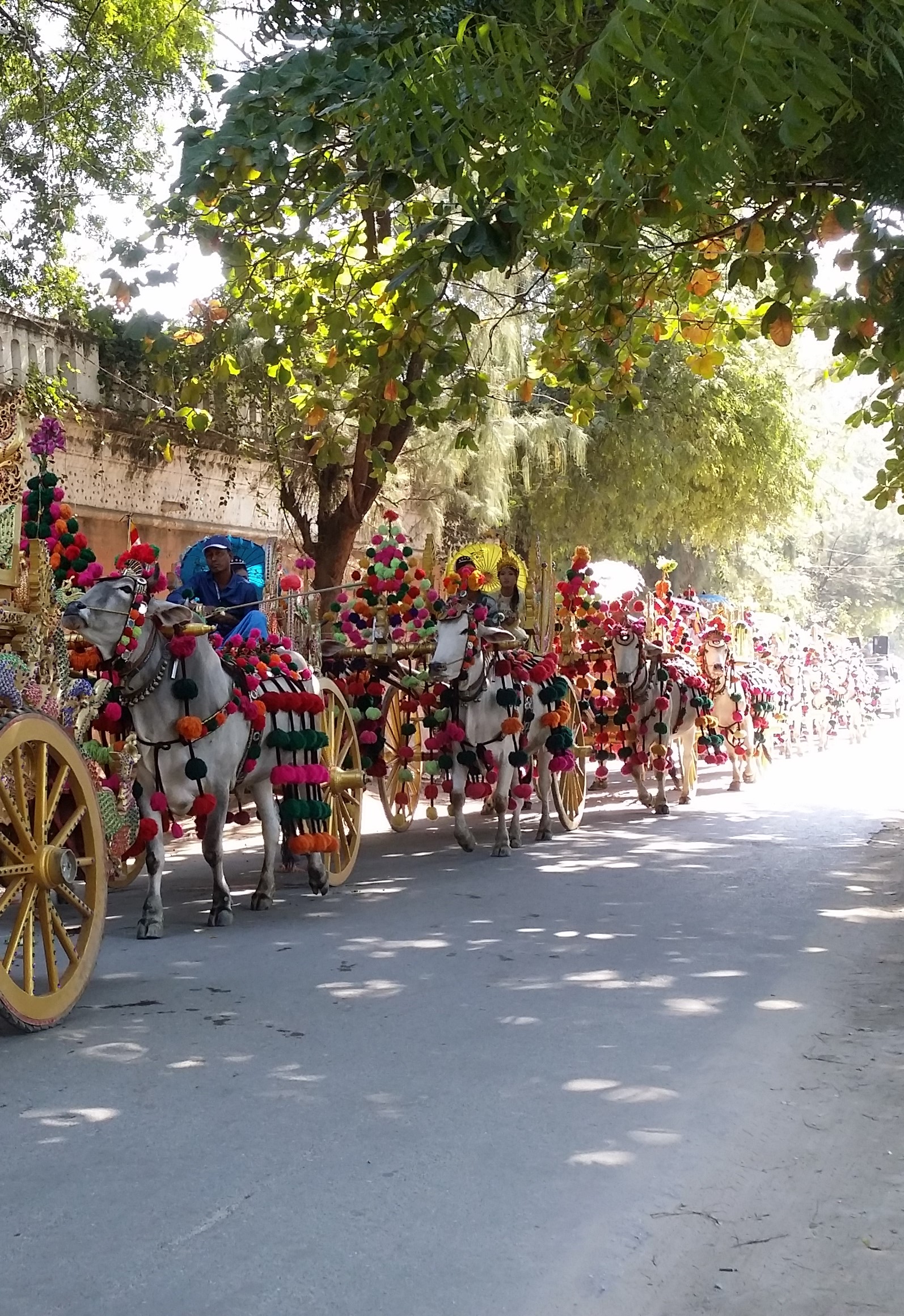 The lively streets of Sagaing. Photo by Thett Su San

How long have you lived here: Fifteen months

Best time of year to visit? From July to the end of February. My favorite time is after a drizzle, when the dust settles.

1. The most striking physical features of this town are . . . Sagaing Hill dotted with numerous white and gold stupas, meditation retreats and monasteries, the River Irrawaddy, and two magnificent bridges across the Irrawaddy — the 1934 Ava Bridge built by the British in colonial Burma and the 2008 Yadanabon Bridge built by a Chinese company in transitional Myanmar. The bridges and the ethno-religious diversity make me think of Sagaing as the Brooklyn of Burma, even though Mandalay is no Manhattan. The town’s sorry sights are ubiquitous plastic waste along the riverbank and at the bathing beaches, and ships dredging sand from the riverbed day and night.

The soundscape at the town centre is a mix of calls from hawkers and a lot of motorcycles honking horns. If you live here long enough you will also hear Buddhist and Muslim prayers on loudspeakers, students learning things by rote at private boarding schools, and cicadas and songbirds. Around midnight, from time to time, when the whole town is dark and quiet, you can hear the competing howls of packs of street dogs in the backdrop of the Irrawaddy wind piping through the leafy gardens of Sagaing. I love that.

2. Historical context in broad strokes and the moments in which you feel this history . . . Sagaing has a curious history. It was the seat of a minor Burmese kingdom for merely fifty years in the fourteenth century. Then just for three years in the eighteenth century (1760-1763), it was the royal capital of the Konbaung Dynasty, Burma’s final dynasty that lasted 133 years until the British occupation in 1885. It was the capital of the Sagaing Region in colonial and post-colonial Burma. Since 2000, however, to the dismay of many Sagaing people, Monywa, a bigger town on the bank of the River Chindiwn, has been the capital of Sagaing Region. Even the official name of the 1934 bridge is the Ava Bridge, honoring Ava, the imperial capital of Konbaung Dynasty. Of course, everyone here calls it Sagaing Bridge.

The people of Sagaing should not fret. While the golden spires of the Ava palace have been reduced to ruins and Ava itself reduced to an agrarian community, Sagaing remains a thriving town, and it’s here to stay despite the ominously-named Sagaing Fault, a gigantic tectonic line that runs through Burma and is responsible for almost all earthquakes the country has endured in its history.

3. Common jobs and industries and the effect on the town’s personality . . . Sagaing has a sizable religious economy, catering to monks and pilgrims. Most visitors to Sagaing are domestic tourists. Himalaya, the only vegetarian Indian restaurant in town dedicated to foreign tourists, shut down after a year or so. We have no Western restaurants and no shopping malls in Sagaing.

Sagaing also has traditional silverware, wickerware, and pottery industries. The Sagaing market by and large remains a farmers’ market. When the market is closed on Buddhist sabbath days once a week, a busier street market appears outside it. Not far from the main market, there’s a jade market in Sagaing that has existed since the late 1990s. Since the authorities turned it into an “official” jade market around 2005, we have seen the jade business slump in this town. Sagaing probably has the highest number of luthiers per population in Myanmar, too. There are at least fifteen luthiers in town, and some of their handmade guitars are brilliant.

Otherwise, Sagaing is a town for retirees, many of whom are Sagaing natives who had left Sagaing for work elsewhere and have come back to live the rest of their lives here.

4. Local/regional vocabulary or food? Locals are flower-eaters. One might try red silk-cotton flower soup, usually cooked with tamarind juice and watercress. Not flowers exactly; only the cores of red silk-cotton flowers are dried in the sun and preserved for soup. On the Sagaing promenade, along the Irrawaddy, there stands the biggest and tallest red silk-cotton tree I have ever seen. The tree, probably more than a hundred years old, sheds all its leaves and turns red in bloom in the spring. The tree itself should be designated as a heritage tree.

There are also flower-salads. Frangipani, mangrove trumpet, and Indian trumpet (aka midnight horror) blossoms are pickled for salads. The other ingredients in pickled flower-salads are fried garlic, raw garlic, crushed peanuts, fish sauce, green chilli, lime or lemon, and peanut oil, served with coarse tea. At the famed Soon Oo Ponya Shin pagoda on top of the Sagaing Hill, there are a number of flower-salad restaurants all year-round.

5. Local political debates frequently seem to center on . . . The need to make Sagaing great again. Locals argue that Sagaing should be the capital of the Sagaing Region, and that the regional parliament in Monywa should be moved to Sagaing. I for one think Sagaing is already great where it is—away from the hurly-burly of politics.

Ko Ko Thett is a poetry editor, literary translator, and anthologist of contemporary Burmese poetry. His poems have been published in literary journals worldwide from Griffith Review to Granta.