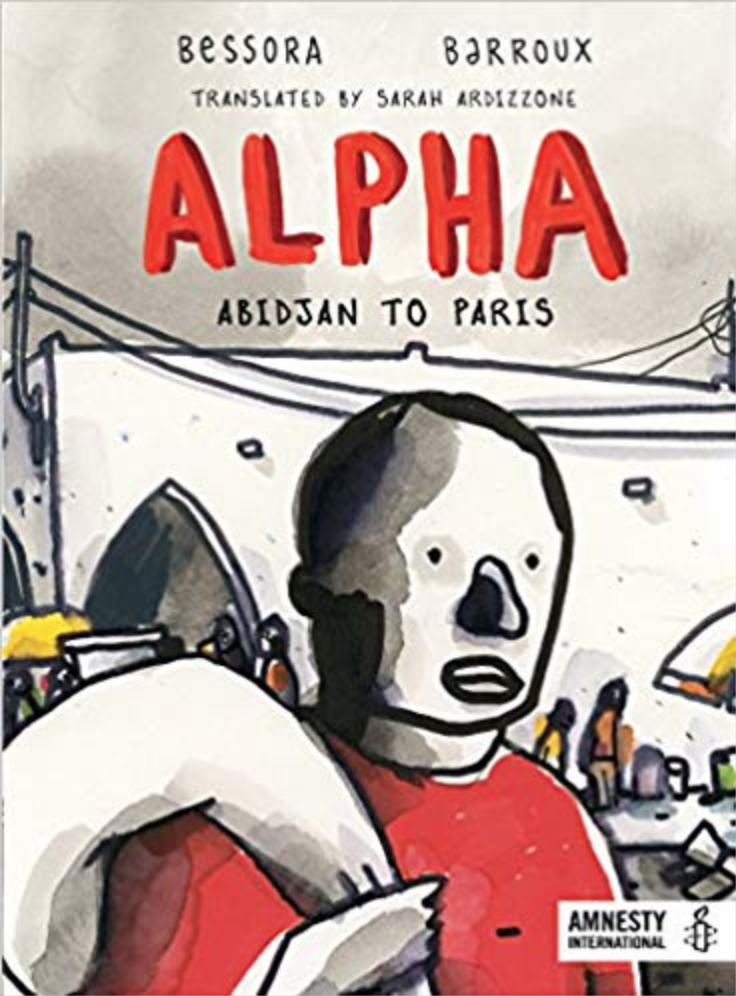 Graphic novel written by BESSORA and illustrated by BARROUX. Translated from the French by SARAH ARDIZZONE.

In 1994, the last year my husband and I lived in Paris, a Senegalese woman named Delphine cleaned our apartment, often bringing her baby girl. At some point, she asked us to help her resolve her immigration problems. The baby was a French citizen; Delphine had come to France to work for French expats returning from Dakar and been let go some years ago.

Now a single mother, she wanted to regularize her status. For months, she had gone from office to office—préfecture, police, Interior Ministry. A true Via Dolorosa. Her file of letters was a catalogue of denials and maybes and try somewhere elses and come back next weeks. Her education had stopped at middle school, her handwriting was large and round. With a law degree, she’d have had a hard time. The cousin of a friend, a humanitarian lawyer, took her case—without optimism, he warned us. About nine months after we returned to the States, he wrote us, amazed—the judge was incensed that Delphine’s former employer had left her to fend for herself. Furthermore, born when Senegal was still a French colony, she’d had French citizenship, but failed to register at eighteen and lost it. He found administrative error. She came away with the precious carte de séjour, a residence permit. Not long after, we received an effusive letter and picture of Delphine in West African robes and turban and the baby in a red dress. Hopefully both have thrived.

There is no administrative miracle, no kind judge in Alpha: Abidjan to Paris, a graphic novel about the Via Dolorosa of West African migrants to Europe from the point of view of Alpha Coulibaly, a cabinet-maker from Abidjan, the principal city of Côte d’Ivoire. He sees no future, though his country has one of the fastest growing economies in the world. His wife, Patience, and son had set off before him for Paris after fruitless attempts to obtain a visa. She hoped to work for her sister, who has a hair salon near the Gare du Nord in Paris. Alpha, not having heard from them, decides to follow, with only the train station for address.

“Furthermore” is what white and African authorities say as they pile on obstacles to legal entry in the early frames of this sparely written and illustrated tale by Bessora, a Paris-based writer of Gabonese and European heritage, and Barroux, a French illustrator. (Each uses one name.) Published in French in 2014 and translated by Sarah Ardizzone, this U.S. edition published by Bellevue Literary Press makes a timely appearance here, as the Trump administration’s brutality toward Central American migrants shocks Americans into awareness of the emotional and physical suffering that “zero tolerance” and nominally less draconian efforts to restrict immigration cause.

African migrants to Europe follow less familiar terrain for American readers. It’s worth starting the book by flipping to the map at the back, drawn in Barroux’s loose style, thick marker lines over wash, to grasp the distances between the way stations on the migrant’s journey. Abidjan to the Côte d’Ivoire/Mali border is 800 kilometers. Mali is more than 1,500 km across. South to north across the Algerian desert to Ceuta, the Spanish enclave at the tip of Morocco, is more than 1,800 km. Crossing Algeria alone takes Alpha thirty days, four cars, one taxi, and two days on foot. (One of my few quibbles with the book is what feels like authorial intrusion when Alpha, staggered by the vastness, talks back to “people who always say ‘Africa’ as if it was a tiny country…” Non-Africans do carelessly speak of Africa as if it were a country, but tiny?)

To those who say that “illegal” migrants are line-jumpers, Alpha’s Kafkaesque and failed ordeal to get a Schengen visa to visit the E.U. is a vivid retort. Like our housekeeper, Delphine, he has a colonial citizenship claim, through his grandfather, who fought in the French army in World War II. He takes his grandfather’s papers to the French consulate, but the grandfather also failed to formalize his citizenship and lost it. “Furthermore…” Always one more thing. He catches a taxi conveniently waiting at the consulate. The driver, Valtis, knows people “who can open the doors of the world for you.” Soon he’s off, “better than rotting here…Yes there’s a chance you’ll die before you reach your destination, but if you stay here, you’ll be dead a lot sooner,” Alpha says.

It’s not clear why Alpha think he’ll be dead sooner at home in Abidjan than on the road. The graphic novel form doesn’t allow much back story. His next lines make more sense: “You never know what the journey has in store for you. But you can be sure about what’s waiting for you if you stay—nothing.” In 2016, I was in Abidjan on a reporting trip and heard frequent variations on this theme from cab drivers, market women, hoping I’d sponsor their children, and others.  Life is better in France, in America. Just help me get there.

Alpha’s traveling companions have similar fantasies. The family of Antoine has pooled their money to send him to Barcelona, where he’s sure to play for FC Barcelona.

Among the most interesting aspects of the book are Barroux’s illustrations of the human smuggling economy: half-dead cars, piled high with luggage and people; the con artists with their “toothpaste smiles” flourishing postcards of the Eiffel Tower; the desolation of a cement plant in the desert which hires migrants who need cash in mid-journey. Alpha, desperate after waiting eight months in Gao, Mali, becomes a trafficker himself, collecting money from others and organizing the next leg of the journey.

Saddest are the depictions of suffering: Abebi, a woman with AIDS vomiting by the roadside, seen from the car. Little Augustin, whose sister sends him alone on the journey, sucking his fingers in the night. Barroux’s palette is mostly black and warm greys, with one small accent of color, a red t-shirt, an orange stripe on a boat, orange and yellow jerry cans, Abebi’s orange and green print dress.

Alpha eventually makes it to Europe. The story ends with him in sight of the Canary Islands as the day dawns. The color in this image is an orange wash at the horizon. Happy ending?

The epilogue tells us otherwise.

The book, which was supported by Amnesty International and Le Korsa, a non-profit humanitarian organization in Senegal, has a somewhat informational tone in places. It’s written in first person, but at times, the voice strays from story, as when Alpha, who doesn’t seem like a particularly educated guy, recounts the travails of an elderly traveling companion trying to get a visa for treatment in Italy where his son works. Alpha is improbably conversant in the details of his case, down to the effect of a parliamentary recess in Italy.

For the most part, the text and illustrations play well together, with the pictures filling in the sensory details that the cryptic form can only hint at. I confess that I’ve never been that into comic books, except the funny ones like Astérix, and the text struck me as dry at first. But as I read, I was struck by how much narrative complexity Bessora weaves into this constricted format, including parallel and intertwined stories of Abebi, Augustin, and Antoine. It’s in the sad epilogue that we feel the writer’s eagerness to let the sails out and run with what would make a rich novel.