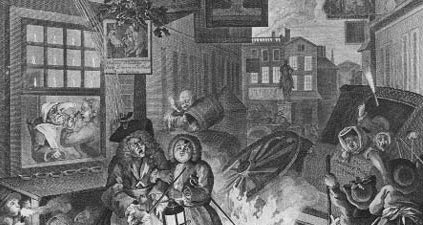 The first in the series, Morning, shows a proper older woman, adorned with “beauty spots” and followed by her servant, holding a fan to her mouth in disapproval as she passes a group of young people engaged in amorous activities, probably still out from the night before. The scene is staged in  the square of Covent Garden with St. Paul’s Church visible on the right. In the background is the bustle of daily street commerce. The viewer can also catch  a glimpse inside Tom King’s Coffee House, which, despite its name, was a venue notorious for heavy drinking and prostitution. The raised swords visible inside the coffeehouse and the man’s wig flung through the open door suggest that  a fight has broken out inside. In the foreground, paupers warm themselves at a fire; one begs for charity but is ignored by the wealthy older woman, who holds a luxurious spotted ermine muff on one arm. Despite these hints at more serious social issues, Hogarth’s focus is on the humorous tension between the woman and the raucous scene around her.

In the second image, Noon, Hogarth depicts a midday scene in a crowded alley in London’s West End. The tension in this image is between the slovenly and wanton crowd, near the entrance to a pie shop on the left, and the elegant French Huguenots, leaving church on the right. Starting in the foreground, the French crowd reveals generational fashions, beginning with the young boy and his middle-aged parents in outfits whose opulent folds and billowing sleeves represented the latest French fashions and made use of ample lengths of expensive, imported silks. Behind them, the older generation of Huguenot immigrants appears in conservative dark suits and dresses with white ruffs. Across the alley, the English children, with their stained clothes in disarray, scramble in the gutter for scraps of food, while the grown couple engages in lewd behavior. Above their heads, a sign for the pie shop, inscribed GOOD EATING, shows the head of Saint John the Baptist on a platter—an irreverent reference to the saint’s biblical death. Upstairs, an elderly couple, who appear to be fighting, wastefully fling a plate of food out of the open window. Although there is more decorum on the French side of the street, Hogarth’s sympathies were with his countrymen, and he disdained Frenchified habits and fashions. There is perhaps an “all in good fun” aspect to his depiction of the English figures that was intended to be humorous, but loving.

The Evening scene shows the street outside the Sadler’s Wells Theatre, then on the outskirts of central London, on a summer night. The primary figures are a pregnant wife and her husband, who is carrying their sleeping youngest child. A cow is positioned behind the husband, giving him the appearance of wearing horns that suggest he is a cuckold and that the children are perhaps the results of his wife’s adulterous activities. The man’s small stature in comparison with his wife emphasizes his submissive role in their relationship. A dog, also pregnant, drags along, exhausted, in front of the couple, reflecting the wife’s state. The couple’s older children trail them, engaged in a fight of their own. The young boy holds a walking stick suggestively between his legs and wails while his older sister berates him. Like the dog, these miniature adults can be seen as a reflection of the inner life of the parents. In this piece, Hogarth’s aim is to lampoon the idea of the loving and peaceful nuclear family.

In Night, Hogarth concludes the series back in urban London, near Charing Cross, showing a caricature of the chaos that fills the city streets after dark. The shop signs in the background reveal that the street is lined with taverns and “bagnios,” often a euphemism for brothels or rooms-by-the-hour lodging.  The shop sign in the foreground on the left reads SHAVING, BLEEDING, TEETH DRAWN, and through the open window, a barber can be seen shaving a man with a straightedge razor. Blood drips down the customer’s chin, suggesting the barber is careless with his task.  Overhead, a hand empties a chamber pot out an open window onto the head of a passerby, and underneath the window,  a couple is hidden away, asleep. On the right, a toppling carriage is being chased, perhaps by creditors in pursuit of a bankrupt family fleeing in  the night.

Through The Four Times of Day, Hogarth pokes fun at the prurient, drunken, slothful, and greedy ways of his fellow Englishmen, providing  a glimpse into his world in all of its delightful immorality. From this series,  we can get a sense of the social types familiar to 1730s London and a  humorous taste of period life. 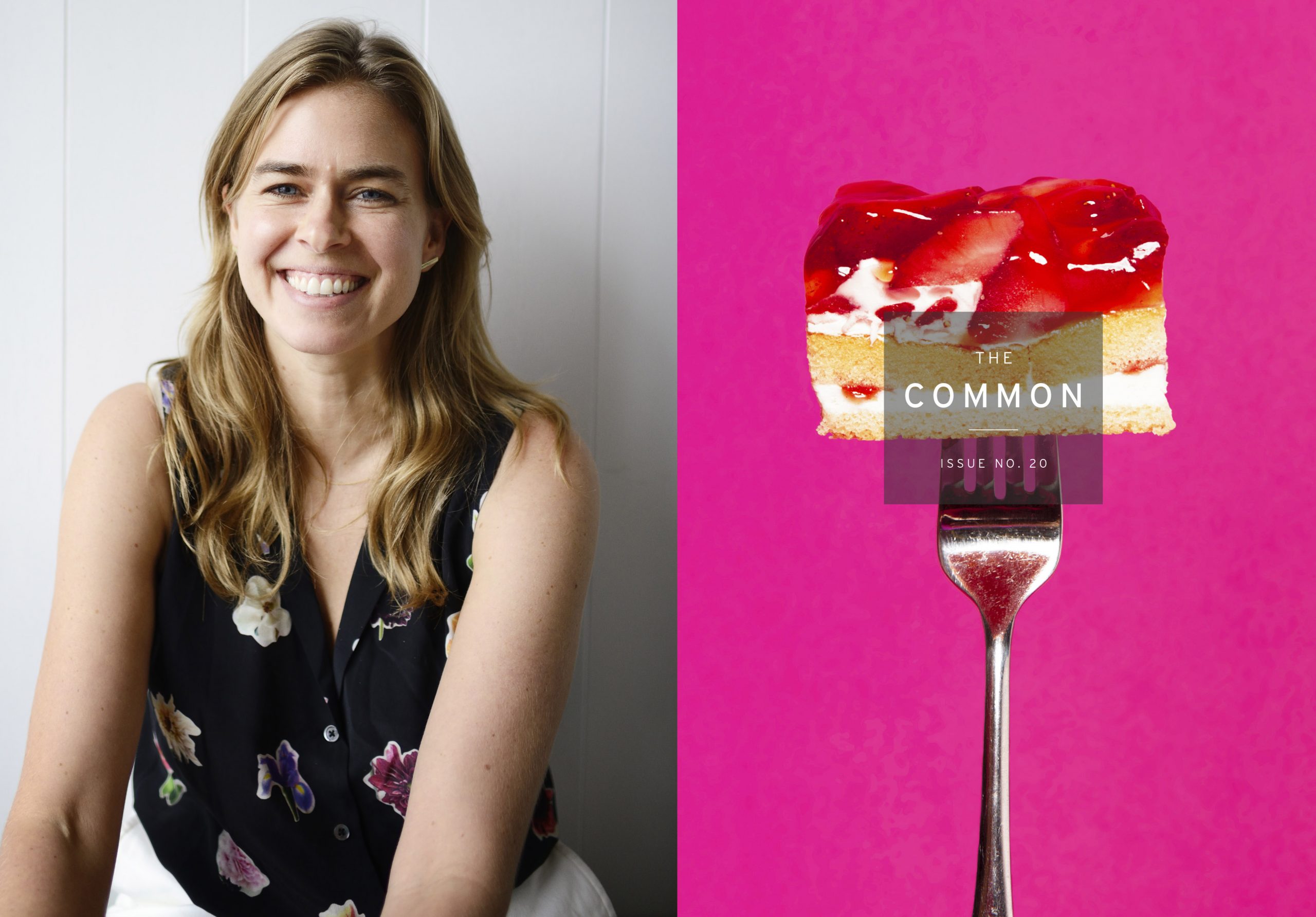 SILVIA SPRING
Silvia Spring speaks to managing editor Emily Everett about her debut short story “The Home Front,” which appears in The Common’s fall issue. In this conversation, Spring talks about the inspiration and process behind this story, which tangles with the difficulties of coming into adulthood.