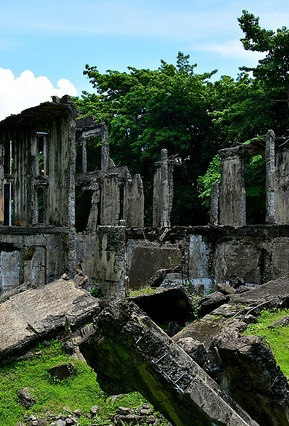 Corregidor Island, off the coast of Manilla in the Philippines, is balmy but windy, a ceiling fan in Florida. I’m hiking limestone bluffs pockmarked with WWII pillboxes, some say live ammo, and blobs of sunset-colored avian called “mango birds” that flutter in and out of sight. Underneath me is a bunker I’m trying to find. It is multiple airports in size, and I gambled I could stumble on it. Lost, I look out from one of the islands many palm-saturated hills and see a statue tumoring from the beach: General George “Doug-out-Dug” MacArthur. Below the bronze feet, are the words, “I shall return.”

You may know MacArthur was cornered in the Philippines when the Japanese surprised the (white) world by shelling colonialist strongholds in 1941. He hid out in his Corregidor concrete bunker, earning his nickname while his men fought outside. Then MacArthur fled, saying he’d come back, and he did, though some believe his steel eyes set to reconquer Manila because it was home to his mistress, whom he called “Dimples.” He later dumped Dimples before his mom could find out, and his mistress committed suicide.

The Japanese held the island and tunnels (which could fit a thousand hospital beds and a running trolly car) for three years before MacArthur returned. With so much bunker, you’d think I could find it. But there are many false mirages, many memories buried here. The island is a-rash in ruins, like Ancient Greece in a rain forest. There’s an amphitheater, along with decaying walls and cannons porcupining through the canopy. At one point I come across the eternal flame of Corregidor, a three-story, whip-like, steel statue painted orange. It’s called the “Freedom Flame” and is said to “burn” as long as liberty rings across the world.

Ironic that the only other eternal flame I’ve visited is in Hiroshima. That one an actual fire that takes a bleaker look, burning until the last nuclear bomb is disassembled. And which will outlast, I wonder, bombs or freedom?

If you think of bombs as war, being anti-war, Kurt Vonnegut wrote in Slaughterhouse-Five, is “as good as being anti-glacier.” And I wonder if the same is true of flames, as it’s sunlight, combined with CO2 emissions, melting the world’s glaciers. And is this somehow hopeful, that glaciers’ days are numbered? Oddly, in Breakfast of Champions, Vonnegut writes about another flame, an artist’s canvas that consists of a thin, vertical strip of yellow on green, called “The Temptation of Saint Anthony.” The artist describes the yellow strip as life’s essence: burning awareness. If there’d been two people, then two flames.

Thinking about this, I round a rumbled corner and note the Japanese war memorial, a simple and elegant marble statue. It has some of the names of the solders but not many as most of the dead Japanese solders were interned by MacArthur in a mass grave, which lies beneath the gift shop, now selling Coke. A Goddess of Mercy statue overlooks the Coke selling and eternal flame, with a baby at her breast.

Finally, that night, I fork over ten bucks to a guide for a bunker tour. He is a twenty-something dressed in designer-jeans, smiling and making shocking jokes. He and I trample in with flashlights. There lies a main drag extending as far as my beam will allow with several side tunnels, and those tunnels with side tunnels. There’s rubble from partial collapses, and I wonder if this is safe. The guide tells me this was once the hospital, where the weak convalesced out of sight from any flame except their own. At one turn, the guide shows me a skull. He picks it up and begins tossing it in the air. He offers it to me with a grin. “You can lick it,” he says, and laughs. He’s confused when I appear horrified. “It’s Japanese,” he explains, and I roast him with my eyes.

We leave the bunker through the main entrance, and even in the night’s star web, I can tell this South Sea island should be known for its beauty, not for war, for the palm trees that have grown around this bunker, for the mango birds, for the outlook upon a tranquil ocean. For the cliffside views and open-door-to-navy-blue photography shots. But no spot of rock on this island, inside or out, on this earth is free from blood. Nor is it free from the yellow glisten of human life.

Clinton Crockett Peters is the author of Pandora’s Garden: Kudzu, Cockroaches, and Other Misfits of Ecology from the University of Georgia Press. He has been awarded literary prizes from Shenandoah, North American Review, Crab Orchard Review, Columbia Journal, and the Society for Professional Journalists. He holds an MFA from the University of Iowa, where he was an Iowa Arts Fellow, and a PhD in English/creative writing from the University of North Texas. Now he is the Visiting Assistant Professor of Creative Writing at Berry College. His work also appears in Orion, Southern Review, Texas Monthly, Fourth Genre, The Rumpus, Hotel Amerika, Electric Literature, and elsewhere.