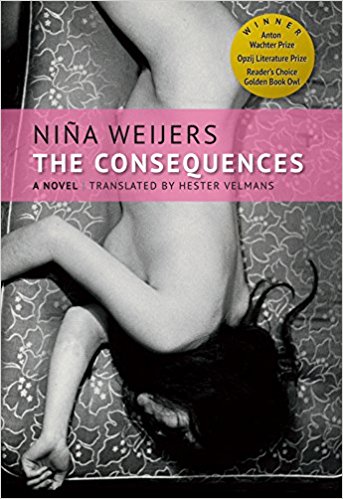 Outstanding books often have a way of catching the reader by surprise, one insight, one unexpected narrative shift at a time. Niña Weijers, a debut novelist from the Netherlands, begins her book as a character study of her protagonist, Minnie Panis. Minnie is a conceptual artist of growing international reputation, whose career has been built on acts of public self-abnegation.  With each turn of the page, Weijers extends her subject and thematic reach, keeping her protagonist in focus while exploring contemporary art, mysticism, Mayan beliefs, and early childhood development (among other themes) to enrich our understanding of Minnie’s character and the forces that govern her life.

Minnie’s story is told by an omniscient narrator who documents Minnie’s history of “disappearances”: moments of near death and of extreme out of body experiences, all of which Hester Velmans, an NEA fellowship recipient for translation, has rendered to strong effect in plain and unpretentious language. The prologue introduces us to Minnie in February, 2012 when she falls through a frozen lake in Amsterdam. This is described as a deliberate gesture—not a suicide attempt, but rather a Houdini-like disappearing act, Minnie’s third. But why such a radical performance? The ensuing narrative leads us on an investigation.

Minnie became renowned for her art school project Does Minnie Panis Exist?—a movie made from the photographs of her trash. A reviewer called her a “sorcerer” who “makes herself vanish from the stage, only to pop up again in unexpected places, yet never for very long.” A few years later, Minnie follows up with a project called Nothing Personal. After a boyfriend left her to live on a remote island, Minnie sells off her things, documenting the process. “Five months later all she had left was a bed, a few items of clothing and a toothbrush.” She juxtaposes the images with voiceovers about mass catastrophes—including global climate change and the vanishing landmasses of Louisiana. This sounds like a satire of conceptual art. And though the result, in the words of Minnie’s agent, is “a weird fucking collision between crazy personal junk and images as stale as three-day-old bread,” it also “adds up” to a work of art that meaningfully explores the artist’s vulnerability and her place in the world. The same goes for the novel.

Minnie’s project at the start of the book—working title Freedom—is a cross between revenge and self-flagellation. A photographer boyfriend shot her nude and published the portraits without her permission. In exchange for not suing him, Minnie contractually compels him to stalk her with his camera for a month, photographing her everyday moments. Though she has manufactured the experience, it boomerangs, leaving her feeling like a “listless plaything of enormous forces.” Minnie is sure that she’s being followed and looks for a radical escape, which leads her to the edge of the frozen lake and out onto the ice though she believes that the photographer is too much of an artist to come to her rescue.

The narrator builds the case that the direction of Minnie’s life and artistic career is shaped by forces outside of her own self. A month before she falls through the ice, she receives a letter from a mysterious treatment center “CBTH,” signed by Dr. Johnstone. The letter claims that Minnie has been a patient of the center, and that, based on the center’s philosophy of life cycles, in the year 2012 (the year when the Mayan calendar ends), Minnie will experience “a major transition,” a state of heightened alertness, leaving her feeling “dazed, confused, under water, so to speak.” Dr. Johnstone requests that Minnie makes an appointment for follow-up treatment.

Minnie finds the letter ridiculous and ignores it. Unbeknownst to her, Dr. Johnstone and his bizarre ideas have been an important part of her childhood. Minnie’s first act of “near-disappearance” took place in 1984, when she was born fourteen weeks prematurely, “no more than a vague promise of a human being.” She was placed in an incubator and thrived thanks to the latest medical technology. After Minnie was taken off the breathing machine, her mother was disturbed by the girl’s inability to cry. She brought Minnie back to the hospital for treatment. The pediatrician, Dr. Johnstone, theorized that, despite Minnie’s apparent health, her brain stem remained under-developed, leaving her unable to processes emotional stimuli. He talked Minnie’s mother into submitting the baby to an unorthodox treatment at his experimental center to “reprogram” her senses. He placed her in front of the TV for many hours a day and played audio recordings for her, until one day she cried listening to the chants of the 12th Century religious mystic, Hildegard von Bingen.

The effect of Dr. Johnstone’s programming is enduring. Later in life, hearing these medieval chants, Minnie experiences extreme surges of emotion, as well as the acute sensation that “the world is a place of improbabilities.” At the age of seven, she “disappears” for the second time. This is the most mysterious of the disappearances, in which she sneaks out of school to collect strangers’ wallets. Her mother finds these wallets in her school locker, and it turns out that one belongs to Minnie’s father—the man whose name and identity Minnie’s mother has withheld from her daughter, the man who does not live in the Netherlands and visits only on rare occasions. After extensive questioning, Minnie reveals that she’d found some tapes with Hildegard’s music and that, Hildegard’s voice had been sounding in her head, compelling her to commit transgressive actions. (This still doesn’t explain how Minnie came across her father’s wallet—but at this point in the novel, a reader grows accustomed to living with unresolved mysteries.) Hearing this, Minnie’s mother takes her back to Dr. Johnstone’s center for the adjustment in her “programming.”

In 2012, too, Dr. Johnstone comes to the rescue. He plays the role of a magician or a God-like being, whose hand comes down to the water as “a Manus Dei,” as if Minnie “were a character in some Stephen King novel.” He pulls Minnie from the frozen lake and takes her to his house, where he allows her time to recover and explains some of her history to her. His interest in Minnie transcends the doctor-patient relationship. He treats her as his own creation. When she failed to respond to his letter, he started following her. On the afternoon of her near-drowning, he was there, stalking her alongside the photographer.

I found the read to be so exhilarating that as the book drew to its close, it took effort to return to the question about the nature of Minnie Panis’s disappearances. The question: what drives these disappearances, is stated and restated so many times that it, in itself, becomes a disappearing act—woven into the very nature of the book, it disappears from the reader’s consciousness.

Only after I finished the novel, did it occur to me that Niña Weijers showcases a particularly female life trajectory in a world where feminist ideals of equality between genders are a desirable yet distant goal. There’s no huge mystery behind Minnie’s disappearances. Once I take a step back from the canvas, I see this clearly. Of course: As a woman and an artist, Minnie is not fully in control of her own story. It is telling that, according to Dr. Johnstone, at birth she’d been cut off from her emotional center—that part of the psyche that Western culture typically associates with female development. To “reprogram” her, Dr. Johnstone turned to the music of Hildegard von Bingen, whom he calls “one of the first feminists in history.” For all that, Dr. Johnstone acts no better than Professor Henry Higgins of George Bernard Shaw’s play Pygmalion (adapted to the musical My Fair Lady), who tries to turn Eliza Doolittle, the Cockney flower girl, into a lady by teaching her “proper” English. But what dramatic irony: to have Johnstone use a feminist’s music to program Minnie’s emotions.

Notwithstanding the proto-feminist musical conditioning, Minnie has little agency. Men, her mother, her own body co-opt Minnie’s decision-making. Despite Minnie’s considerable talent, Niña Weijers leaves her character in the bind in which so many female artists—filmmakers, photographers, painters, musicians, writers—find themselves—being seen as a woman first and an artist second, and consequently vanishing from history. As much as Minnie’s art is appreciated by the critics, the photographer’s spread of stolen images of her half-naked body receives far more attention and monetary compensation.

Weijers does however give Minnie the opportunity to rise again. Minnie has made an art form out of her not fully intentional vanishings. Yet at the end of the novel, when she leaves Dr. Johnstone’s care, if it can be called that, and strikes out on her own, she aims to build her own future. We catch a glimpse of her at an airport in a remote part of China, dreaming “to start afresh from that point forward.” Minnie hopes to free herself from her past—and the reader is left to decide to what extent this goal is realistic.

Curated by ISABEL MEYERS
Amidst the warmer days and rainy weather, we at The Common are busy preparing to release our spring issue. In this month’s Friday Reads, we’re hearing from our Issue 21 contributors on what books have been inspiring and encouraging them through the long, dark winter.