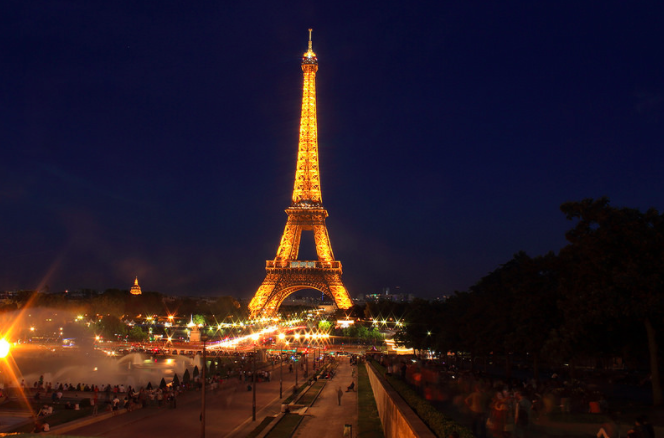 We had no plans to visit Paris that winter. I was at the end of the second trimester of a difficult first pregnancy, when a few hours away from the comfort of home were all my hundred-pound body could afford. We were living in Salem, Virginia, five thousand miles from all our family in India.

It was my sister’s wedding that brought us to the City of Light. On a chilly December morning in 2004, my father called us to break the news that my sister would be married in just a few weeks’ time. Could we book a flight to India? There would be no wedding without our presence, he was adamant. The groom was a good match: a software engineer, an only son, who had just returned from the US. My father didn’t have to tell us that such bachelors didn’t stay single for long.

I was excited about going. “I really feel better, no morning sickness, nothing,” I said to my husband, who was hesitant. Soon the travel agent got back to us with an offer we couldn’t refuse — a direct flight from JFK to Delhi, with a three-day stopover in Paris on our way back, all for under a thousand dollars per person. The cheapest ticket we had ever bought for India was priced at thirteen hundred dollars, and that was without a romantic vacation tacked onto the end! We asked the agent to hold the tickets while we deliberated. We found ourselves justifying how it couldn’t have come at a better time: my husband’s friend from his undergraduate years in Delhi was getting a PhD at the Université de Paris. We could stay with him, the friend said when we called. We became convinced that the trip was preordained. At the very least, it was something we wouldn’t have done of our own volition. With our thrifty lifestyles and almost annual visits back home to India, we couldn’t afford a vacation, let alone to Paris.

The next day, while my husband looked into the details of getting a Schengen Visa, the permit to visit the European Union, (Indian nationals need a visa to travel to virtually any country on earth), I frantically looked at a Lonely Planet guide in the public library and took copious notes about destinations to see: the Eiffel tower, the palace of Versailles, the Louvre museum, the cathedral of Notre Dame, and the library built like a folio. A week later we went to the French embassy in Washington, DC to get the visa pasted onto our passports. I was so excited that I brought the visa to my nose, to smell it. The glue was still wet under the page and it smelled fresh, like a new book.

My idea of Paris, like my idea of everything in the western world, was formed by the fiction I’d read as a girl. At my Catholic high school, I was assigned to read an abridged version of A Tale of Two Cities, by Charles Dickens. All the girls in my class memorized the lines from the famous kiss scene between Sydney Carton and Lucie Manette: “She kisses his lips; he kisses hers; they solemnly bless each other. The spare hand does not tremble as he releases it: nothing worse than a sweet, bright constancy is in the patient face.” We loved that we had been assigned to read something so romantic. Living in an orthodox, traditional society, such literature was off limits to us, at least in our homes. And at school, the librarian would give us the evil eye when we checked out copies of Mills and Boons novels, a British romance series. But Dickens’s Parisian kiss was allowed.

Two weeks later my husband and I were admiring the Tour Eiffel bathed in warm yellow lights at night. During the day, we toured the Louvre, and stared into the eyes of the Mona Lisa amidst a throng of tourists clicking pictures of her. A group of security guards unsuccessfully tried to disperse the crowd, to stop people from capturing the famous painting. Outside, we strolled around the glass pyramid, and were awed by the Jardin des Tuileries, with its orderly trees pruned into measured squares. We stood there, our eyes glued to the French architecture, until my legs could no longer bear the weight of my swelling belly.

In the evening we went out for dinner, and afterwards walked along narrow lanes lined with luscious bakeries, where baguettes hung as souvenirs. The lanes were paved with black stone, so smoothed by years of use that I wanted to remove my shoes and step on them, barefoot. Adjacent to the bakery and the coffee shop, Smart Cars lined the sides of the street. The luster of the smooth stones was reflected in the steel gray of the car, like the silver sheen of a full moon. A young couple, unaware of the world, was kissing, standing on the sidewalk beside the bakery, and the sight of them reminded me of the lines I’d memorized as a young girl, going to a Catholic school in India. I remembered how sincerely I would recite the lines to myself—as sincerely, I imagined, as the nuns who moved their lips while rubbing rosary beads between the tip of their index finger and thumb.