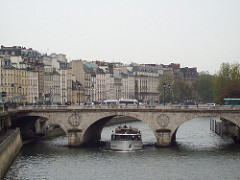 A sound I hope to hear no more

five flights to the cobbles of Rue Valadon

from the closet-sized kitchen where, wrung

dry, come to the end of endurance and all sense

of possibility, I had thrown it out the window.

on river and trees—the sort of light,

I remember thinking, at once so matter-of-fact

yet gorgeous enough to seem embellishment—

and I notice a young woman noticing

something glistening on the gravel path.

She bends, lifts it in her hands, and rising,

raises her eyes to mine, extending her hand

to show me, in it, a golden wedding band.

Perdu?—the only word I caught

from her question. How to tell her, yes,

I lost a wedding ring this morning;

but a different ring, and lost for good?

As I turned it over, she took my hand,

and curled my fingers around the ring, and spoke

in a fountain of French whose only words

I could discern were évangéliste and cadeau.

The first word made no sense.

But when I heard the second word, “gift,”

in that moment I was ready to believe

in that magnanimous light bestowed upon us

for no one’s acceptance or refusal,

believe in recovery, in what lies

nascent and curled within some clemency

of possibility. I could even think, holding that ring,

that she was what an angel would look like—nondescript

in denim and wool, no jewelry, canvas shoes,

in broken English now, yet unmistakable

in tone—a sincerity that marks the universal language

of fraud. Said she’s hungry, has no

And all this happened, as true as I’ve written it;

though I’d blame no one for disbelieving.

But I’d ask, why should my capacity

for gullibility be any less than another’s

talent for deceit? I have to thank her,

who moved me from a failure to a fool.

My wife and I survived that trip;

but days afterward, returning to those paths,

I’d watch that same con played by others—

the fake finding of fake rings—

able, at least, to recognize what little I know,

how much I want to believe.

William Wenthe is the author of three books of poems: most recently, Words Before Dawn, and previously, Not Till We Are Lost and Birds of Hoboken. He has received an NEA Fellowship in poetry and two Pushcart Prizes. His other writings include essays about poetry and the libretto for the opera Bellini’s War. He teaches creative writing and modern poetry at Texas Tech University.