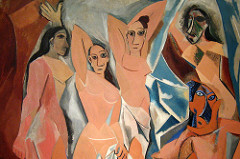 By DANIEL TOBIN
It could be on a card, tucked away somewhere buried
In a drawer under tools, the keys to doors
Left long behind, folded like a phone number
Into the black book of forgotten friends—the name
Of that plant, tropical lenient frond we keep
By the window for light in our kitchen, each broad leaf
When young untwisting from its woody sheathe
Like a scroll unfolding, patiently, out of itself
Until a mask emerges, or what looks a mask,
Triangulate, emerald, shaped like a melting heart,
Mottled in bordered squares like a turtle’s shell,
Each a trim of isinglass and lustrous depth of green.
I look at the look of it and think Les Demoiselles
D’ Avignon, each glance turned slightly otherwise
But still fixing on the viewer, so when you walk away
You almost feel whatever it is beholding you
From within the painting’s flourishing
Of brush and pigment, some distillation maybe
Of the model’s only life, the extract the artist
Refines out of accidence. Quintessence
Would be the word, but Picasso, driven,
Used his models like demoiselles—his brutal
Need—and went through them like rented beds,
Which renders the method of transcendence
Dubious, the simile wanton. Though nights
When we turn up the Jazz and sway to Ella
Singing Cole Porter, our small tropical splendor
Nods to the softening bounce of the room
And appears to watch us giddily like the children
We’ll never have, and for the moment
Everything we’ve done wrong feels fallen away
As I dip you, comically, not ungracefully,
To the end of the song. It’s when the fluent
Leaf begins to yellow and dry, a scabrous skin,
And it dips to the counter on its weakening stem
That looks almost translucent, but elegant still
In its slim arc, that I think of your mother
On her last day, no longer able to hold her own
Head up, you holding it for her as you cradled
Her in your arms and softly patted what color
She had left back into her face that was already,
Or nearly, the mask she would wear, freshened
And pillowed, in the parlor. Yes, I think now,
There is no likeness. It just is exactly what it is—
The unrecoverable downward tilt after the names
have been called, as one of us will call to the other
While the one leaving lifts for the last time, lifts and stares,
At what at what one wants to ask, but does not dare.

Daniel Tobin is the author of seven books of poems, Where the World is Made, Double Life, The Narrows, Second Things, Belated Heavens (winner of the Massachusetts Book Award in Poetry, 2011), The Net (forthcoming, Four Way Books, 2014), and From Nothing (forthcoming, Four Way Books, 2016), along with the critical studies and Passage to the Center: Imagination and the Sacred in the Poetry of Seamus Heaney and Awake in America.  He is the editor of The Book of Irish American Poetry from the Eighteenth Century to the Present, The Selected Poems and Lola Ridge, and Poet’s Work, Poet’s Play: Essays on the Practice and the Art.  His awards include the “The Discovery/The Nation Award,” The Robert Penn Warren Award, the Robert Frost Fellowship, the Katherine Bakeless Nason Prize, and creative writing fellowships from the National Endowment for the Arts and the John Simon Guggenheim Foundation.