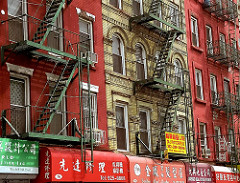 By HOLLIE HARDY
Come home from a Tupperware party.

Look out across the lake and imagine the feel of your tongue
against the truth.

Prevent the neighbor’s dog from barking.

Refuse to exist sanely under conditions of absolute reality.

Be the old man carrying flowers on his head. Be life-like.

Think of asking the servants to wax the change,
before placing it in the Chinese tank you keep on your dresser.

Smooth the silken, sad, uncertain rustling of
each purple curtain.

Force yourself to function
far below the summit of your potential,

Learn how to jump. Jump straight down.

Take a snapshot of a young woman
standing in front of a parked motorcycle.

When the war is over, go no place in particular.

After the monkeys come down from the trees,
teach them to hurl sharp objects.

If ink is the blood of language, and paper is its flesh,

Don’t believe the official report. Wear it like a mask.

Try the edge of the Viking’s little ax with your fingers.

Tell lies about parrots in a colorless singsong.

Just stand there, looking at the sky. Or the glove’s
twisted finger.

Because it is difficult to throw out anything so precise
and crafted as a metal key,

Throw something out of a window.

Buy four cups of coffee and a six pack of Jolt.

Be consumed by unreason. Stare at an empty glass of milk.

Accessorize with a necklace of teeth. Reveal the bite marks
on your shoulder.

Tighten the circles of love like a noose, squeezing,
ripping, slicing.

Let your spirit into the kitchen. Teach yourself how to breathe.

Be a tattered billboard for someone else’s reality.

Sometimes in a flash, wake up
and reverse the direction of your fall.

Start a subtle fire beneath my skin.

Decide not to put on the underwear. Don’t
let the five dollars tempt you.

Use a hard vocabulary to contain the terrible softness.

Don’t leave! I haven’t come yet!

ShareTweetEmailPrint
2011 Hollie Hardy Issue 02 Poetry poetry
How to Jump From a Building into a Dumpster11.01.2011