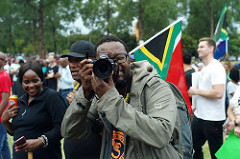 from Longo Dongoa & the Pocket Crucified

our Calvary is Renovation of rottenness.
Scratching the future in the ruins
Patriotic remnants of nuclear fall-out ideals
They overrule the shattered conscience call
writing the remains out of history
Nation-building from our own Fossils
(the palpable WORD is arable
that’s where the freedom seed was sown
bite a gullet  dead voices sprout in that garden
We suck on the liberation bone   dog-feed)
thus it drowned in gold-dust
To each a plot on which to plant their politics
may they grow to format size

“You have to adapt to greater Society”
Like all are equal at the lowest level
They Denominate it common
Race is concept-bound?
Africa wears the Human   conflicted
We Blacks are the Last Issue
Destroy the righteous conscripted
( the synthetic apply for naturalisation
to increase the Fair-Trading supply of organic intellectuals
but spilt body juice & shattered bone fragments splashed brain-matter
catch no skin to flesh blues   Just the poetry of the pit-bull pits
Is pestilence contagious?
Look towards Zim & see the engorged python
It looks like someone’s grandmum

Promiscuity in the Hand of Plenty makes my Land Empty.
The New Radical a mid-scream giggle.
Anaemic-comical prestige of a political gaming temple,
ruckus-pocus. bogus siege of the counterfeit public,
punters & smotherers.

The audience is the performance
in the Necropolis     the meaning’s absence
what’s left is dead ambience
thrust & counter-thrust of celebrant argument
among the throbbing members of parliament
as a nation in decomposition celebrates its constitution
the power-junkie jackals improvise cat-calls  the hyenas heckle
the global funeral parlour is ecstatic
Coroner & embalmer collect their trinkets
Among the probers rank wielders of crow-bars for the whine-miners.
The Pawn-Fabricator & the Porn-Czar   June ’76 Winter-mediate.
Cold Cut the prance-hall pimp   is the dead- beat selector.
The commentator is hooked up to a respirator
aka arse-spiriter.
At Congress of the lame & the slack.
each ambitious one fashions himself a punnany-splitter
Bowels unrelievable
the dominance impulse in the mannikin
witness the rule of Sad Sack over Rolly-Polly
sprung from an eye-pod
they see same sight uniform vision
no debate but dual transmissions of static

Preach liberation theology in the face of race-hate
& leave space on the collection-plate
for the severed head of state
they call it street knowledge,
it washes out of the township drains to flood the suburban’s
Comes the Rapper with the Sewer Flow
To battle the hell-free / Belfry Saints
The city council shut off the water mains
He suffers a fatal stroke on the tongue
(diagnosis : dehydrated rhymes)
Columbus & Christian army ships sail on    beyond the 21st century
To butt-plug anuses
Yet “establish who the most famous is”
is the model poet’s concern
Both the safe & the grave reward the trivial bard
Ruffle from the banknotes & shudders from the corpses
as raffles give us our spokespersons

what aspect reflects memory selects.
Chainchoker & Mulebrainpoker.
Take your spatter-stammer & flatter-hammer verbiage.
to where fashionista & trendoid compare adenoids.
Capital contrivance is to don a Birth-mask,
when death sentences serve a six and nine function
fly-swap   they switch crotches like Burroughs’ fiction
sky-map the roach’s future is in the stars. . .
nigger gets there via the kitchen
spy-trap fantasies govern now arses are torches
the trespasser carries the perimeters
“everybody’s property is what i possess”
says the ruling order as it petrifies
defines what it denies   refines the lie
desecrate the ground between command & subordination

& ja-baas is denigrated . . . subservience is luxurious
as the boulder erodes it eats away at Sisyphus
as it becomes a pebble Sissy Fuss shrinks down to Little People
& those are staple-diet for Missus Maple
So is the Nation-Creation fable
The bill withers in the bio-chemical gore-fest
garbage crucial mime
walk across the Bridge over the River Naai.

The horn mill grinds out praise-singers, crap gunners,
soul invasion panty-liners to cover the yearn-marks
of snigger-niggers
With Dues to slay of those who overstay their hell-
cum The Articulate Run it Parallel to Radiation—
Spew it north quick we have views to subdue
Subsume the yielding ideal
foreign exchange spiritual eruption into material possession
abstraction subjection to laws of concrete ordain
desperate jaws on a domesticated course
rusticate maws to suppurated sores
Father Nation, Lion & Tiger got manicures
& climbed up bill-boards
To necklace the gods to repentance
What ethics in advertisement?. . .
Upward mobility says:
“Between shadow & rubbish-heap I create my own dawn
Became Slime Merchant for the toxic wasted
in the chief executive office . . . watch me float   ether-bound
& catch the smell on the rebound”
Mandela in the media is product placement
The hottest sale is of complacence
We pitch it at the Diddle Class

Lesego Rampolokeng has published ten books, the latest of which is Head on Fire.

ShareTweetEmailPrint
2012 Issue 4 Issue 4 Poetry LESEGO RAMPOLOKENG poetry
If Only the Tswanas Could Dance10.01.2012