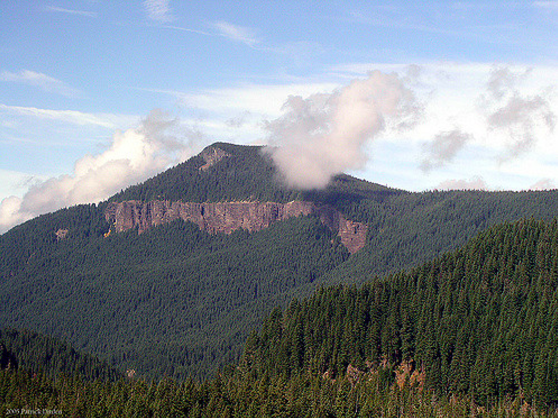 We drove straight from work and hit the trailhead at 6:15. The sun was already low, and the shadows of Douglas Fir fell long over six feet of snow. For the first hour, we had the false sense of warmth as dusk lit the air with alpenglow. Almost without notice, it became harder and harder to see; then it was dark. We turned on our headlamps, and the blue reflective diamonds marking the trail shone like gas flames among the trees. It was slow going. A foot of fresh powder had fallen the night before, and even with snowshoes, we waded ankle deep beneath our full packs, sweating under our fleece while the freezing air burned our faces.

When we arrived at Maiden Peak shelter, light from inside shone faintly from the tops of the windows where the snow had melted beneath the eaves of the cedar shake roof. Stairs had been cut into the ice down to the heavy wooden door. The smell of woodsmoke rose from the galvanized stove pipe on the roof, and the wind lifted spindrift from the hemlock branches. Gray Jays had dug up the latrine pits from the previous day, staining the blank white the color of spilled coffee. Charlie opened the door, and the heat from inside sent blood into my cheeks. There were four others already there; they had skied in earlier that day and looked tired. One man had twisted his ankle and sat with his foot propped on a wooden stool, the wool of his sock stretched against the swelling. Still, they laughed and offered us some of their soup, which simmered in a large stock pot on the woodstove, and it felt good to sit amongst these strangers after the five mile climb.