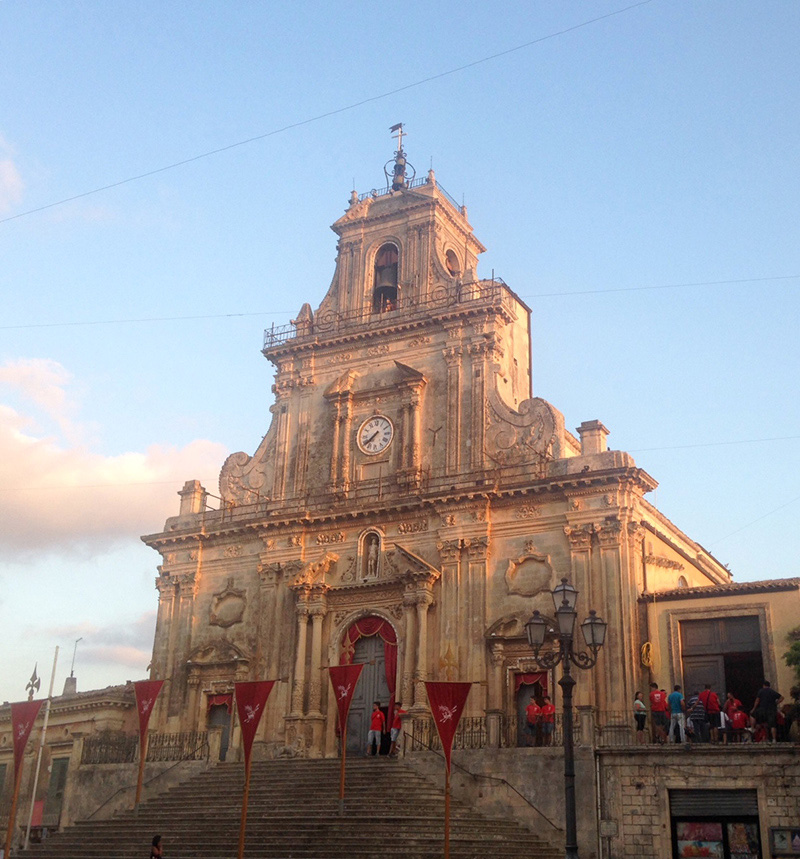 1. Four of us are here, in mid-Sicily, waiting for something that will lead us to make art. The life of Akrai Residency for three weeks. Two of us speak partial Italian. One of us has never been to Italy. We come from Poland, Iran, America, and New Zealand. This non-touristic town is now our food, sleep, air, conversation, and confrontation.

Palazzolo Acreide is a small (8,000 person) town built of rock. The streets are cobbled, the buildings are ancient brick, the churches rise solid and baroque from rock. Much of it is limestone, soft, shapeable, and light; it gives the town a yellow glow. People here seem to grow from a desire to be full—not just of food but of color, taste, feeling, and sound. Church bells punctuate each quarter hour, in our central neighborhood and in all neighborhoods; the slightly staggered ringing echoes throughout the town and valley below. Two fifteen, fifteen, fifteen. Two thirty, thirty, thirty.

We’re here during the festival of Saint Sebastian, an exhaustive celebration of the Catholic martyr, who’s embodied in a life-size, Jesus-like icon carted about on men’s backs. They sweat in the 86-degree heat as they shoulder his weight, wipe their own anguished faces. Men pay large sums for this privilege. Money and holiness intersect. Recently, the arrows in Sebastian’s chest were upgraded from silver to gold.

The bells of San Sebastiano Church explode at odd hours, revving people up for the festival. Firework cannons sound off at 7 am, 8 am, 7 pm, 8 pm, 12 am, 1 am, on unexpected days, shaking us alert. In the heat-haze I dream of eating the dog next door who barks all night long.

2. We travel through Palazzolo Acreide’s museums and Greek ruins, looking for clues to the origins of this kaleidoscopic land. Sicily is a place that has been traveled through and inhabited by so many. Its roots run back through layers, intersected by crossroads. Sediment, carefully placed rocks, carvings. All the way back to the Siculi and the prehistoric tombs that date to the twelfth century BC.

In Sicily before the Greeks Bernabo Brea writes of the cave paintings, tombs and tools that the Paleolithic inhabitants of the island left us. Even before the Greeks arrived in the eighth century B.C., says Brea, Sicily was a meeting point of different cultural universes. The indigenous Siculi in the east, Sicani in the west, and Elimi in the north-west. Indo-Europeans comprised of indigenous and exiles. Theirs was a spiritual yet pragmatic world.

I walk Via Panorama in the heat, looking for Siculi tombs and houses built into the rock. There’s something deeply compelling about their presence here, the first people who understood how to live in Sicily. In Latin genius loci is the idea that a supernatural being guards each place, bringing to life its true nature. DH Lawrence wrote in Sea and Sardinia, “Wherever one is, the place has its conscious genius. Man has lived there and brought… that place to consciousness, given it its expression, and, really, finished it.” Were the Siculi the first to bring Sicily to consciousness, and did they finish that process? Or has each group of inhabitants since brought a new consciousness? 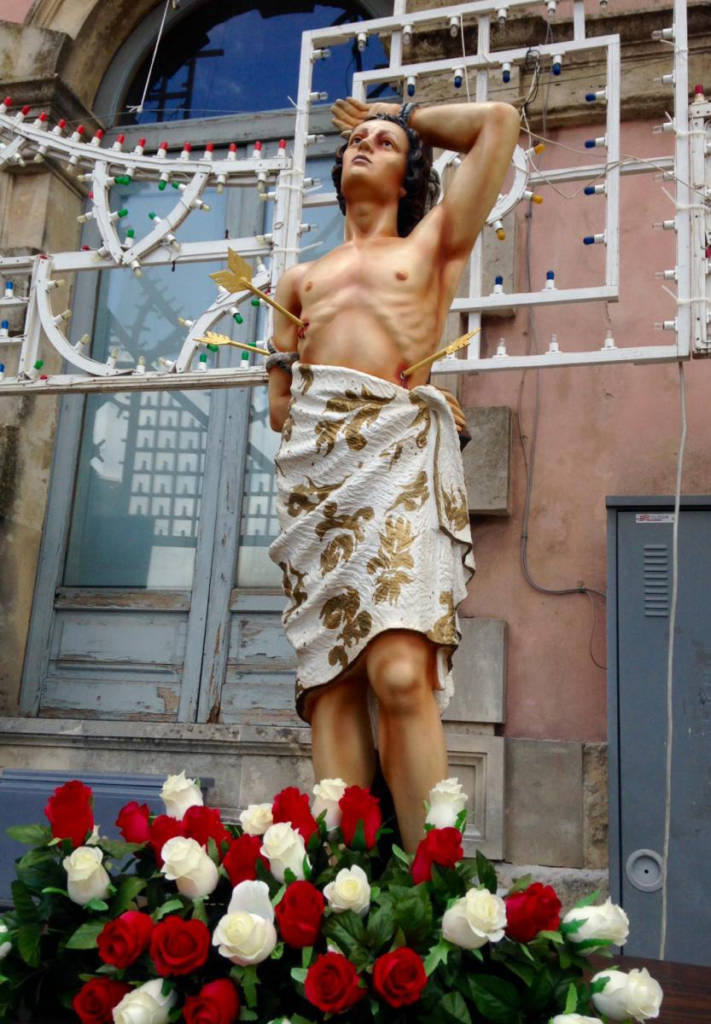 3. Understanding Sicily is the clue to understanding Italy, a land whose contradictions and caprices have long fascinated me. “To have seen Italy without having seen Sicily,” Goethe wrote, “is not to have seen Italy at all.” But this is not a land you can come to know in just three weeks. It’s a place that, I find after my discussions with locals, still perplexes many who live here.

“The complexity of this place,” says local lawyer Giovanni Leone, “is shown in the way that it’s a mountainous land that loves the sea.” Plentiful water flows underground, keeping the fields alive, and—at one time—the stone grinders of the Santa Lucia grain mill turning. Forty-five minutes from the ocean, Palazzolo is high country—snowy in winter—that has access to the marine. Tuna is prepared here like rabbit: with green olives and capers. Lupi and muco are favorite local fish. Sea salt is used liberally. It’s as though the green valley below us is actually azure sea.

4. At the Casa Museo di Antonino Uccello, a folklore museum housed in a former aristocrat’s mansion, school teacher Uccello collected peasants’ materials that were no longer wanted. Pieces of Sicilian puppet theater, horse-drawn wagons, myriad hand tools, paintings on glass, and domestic tools like ricotta molds were all discarded throughout the twentieth century. Industrialization then, and technology today, devalued these meticulously crafted items.

We find a huge stone wheel that was once propelled by a mule to mash olives in the Middle Ages. As it rotated the olives were crushed, then transferred in baskets to a wooden press that required six people to turn it. From there oil flowed out, catalyzed by hot water. An intensely manual labor, dependent on human might. The extra virgin oil rose to the top and was scooped off into ceramic vats, then measured out drop by drop for food. The oil and water that remained was used for cleaners, lubricant, soap.

At the Sunday market under the porticos of the town hall I find big blocks of white olive oil soap for sale amongst red and green peppers, eggplants, walnuts and figs. “What’s that?” I ask the vendor. “Olive oil,” she says. “Olive oil?” I gesture towards my mouth as if it to eat it, and she looks bemused.

Miscommunication resolved, later it feels smooth on my skin under Palazzolo’s mineral-dense water.

5. As I interview locals for my gradually forming project, a librettino called The Five Ages of Pistachio, I’m told that many of the foods we are eating here have been eaten since forever; they date to “before time.” With the other residents of Akrai I prepare local salads, or we eat them at Pasticceria Caprice, the village’s daytime hotspot: spinach and sundried tomatoes, a salad of black olives, red peppers, fresh onions and olive oil. Boiled biscotti, particular to this region. Salted ricotta, flavored with marjoram. 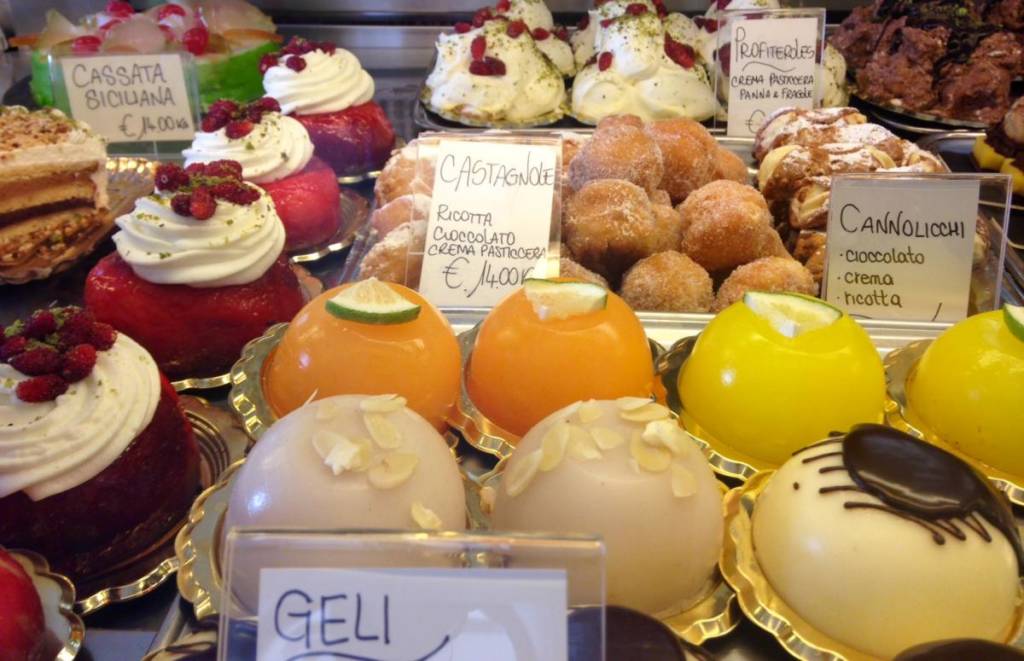 The rich soil here has attracted so many peoples, and each has left their different expressions of living. I think of the Eggplant Parmesan or Parmigiana we eat at Caprice. Possibly an Eastern-Sicilian dish originally, here it’s given additional layers of ham and boiled egg—on top of the usual eggplant—that I’ve not seen elsewhere in Italy. As the dish has moved regions, layers have been added and taken away.

The Siculi were invaded by the Greeks in the eighth century. The Romans, the Byzantines, the Arabs, the Normans, and the Spanish all followed. European and British explorers started arriving in the fifteenth century, and then came Goethe, William Henry Bartlett, and DH Lawrence. They wrote treatises, drew maps, and gazed, seeking some clue to civilization, to the whole. “They’ve all passed through and they’ve all left something,” says Giovanni Leone.

My co-residents have left impressions, pieces of effort. Dorota Podlaska, a Polish performance artist, has purposefully reworked local desserts without the beauty; she gifts these back to the villagers on a crowded Friday night underneath the town hall’s porticos, asking them, “What is wrong with this dessert?” Bahar Behbahani, the Brooklyn-based artist, has made a bread film. Images of local, artisan bakers are interspersed with images of Palazzolo surrounds. She shows this to the villagers while offering a massage; in the middle of the main drag, she kneads their backs to suppleness like dough. And Mark Dresser, the west coast-based musician, has developed new pieces inspired by the modicane, a local savory pastry. “The modicane has a specific taste,” he says, “built of layers transformed by heat.” He brings us back to Caprice to perform this theme and variation. The sounds are recorded by the owners on their iPhones, but there’s something more that remains as his bass chords cease vibrating.

Though I might be imagining it, I sense the unspoken consciousness of the Siculi as we walk the streets: a sense of the land looking back.

All images of Palazzolo Acreide by author