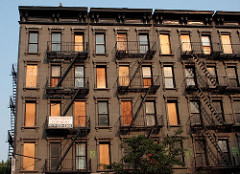 Even tight, feared spaces can expand, morphing from the past
into the fuzz of nostalgia, which I’ll try to avoid here,
e.g., #1, me at 16, looking for the “model studio” listed
in the Manhattan Yellow Pages. Toting a portfolio, I climb
the stairs of a West 40s walkup worn as another century.
“Models?” “No, that’s Cheekie, 2 flights up,”
one red talon points to heaven and off I go.
A woman in a sheer negligee greets me, opens the door wider:
I take in a stripped-bare space, commercial buzz, the motion
of flouncing baby dolls, lace bra the black center
of a blinding white circle, and Cheekie, I assume,
behind the tripod. The image flickers across my retina,
then burns in. The hallway presses close, and my skin feels tight,
as if about to chip off in jagged bits like the ancient green paint.
I flew from there—no, plunged—a bird escaping fire.

e.g., #2, someone lit matches after the creaky elevator cable
snapped and plunged its human load
that New Year’s Eve in SoHo. I believe
it was Marie Antoinette in drag. I remember her coiffure,
towering ice sculpture frozen to perfection,
and satin billows that regally occupied half the elevator,
brushing against the perturbed ventriloquist who clutched
his dummy tighter. Neither had spoken all night, stopping
conversation instead with their sudden appearance and stares
in the center of happy talkers. Yes, I’m certain it was the Queen
who struck matches from a book hidden in décolletage,
holding up each brief, tiny flame like a torch, guiding us
once we hit bottom—jarred but not hurt—feeling
our way through the pitch of a basement
that could have been a Bastille dungeon, but wasn’t.

Maria Terrone is the author of three poetry collections including Eye to Eye (Bordighera Press, 2014) and a chapbook. Her work has appeared in magazines such as Poetry and Ploughshares and more than 25 anthologies. She is the poetry editor of Italian Americana.

[Purchase your copy of Issue 06]