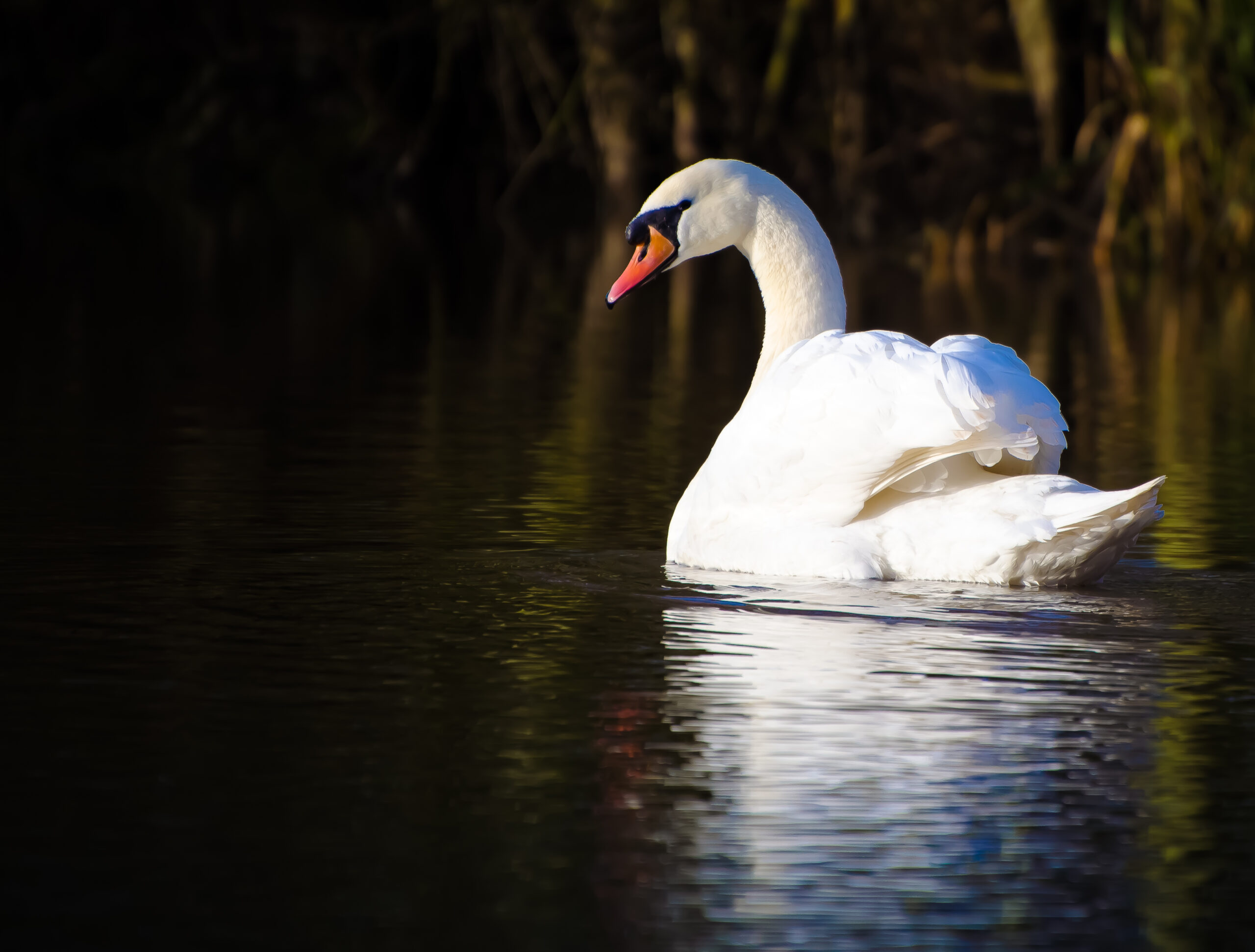 with that same Scotch-Irish blush
Vivaldi burbling in the background

space heater warming behind me like a
very focused sun beam

hissing, windows smeared with snow
and there is but one packet of coffee, a left-over gift

Out the laundry room window, a swan
dips its head into lake water still
murky from last year’s snow, surfaces

silt roping its neck. Some yellow flutter—
I don’t know its name or even what
it’s called—and then a turkey, so close

I almost miss the fat, dark shadow
of its awkward passing. My mother’s
grandmother—uncomplaining, I’ve heard,

but sad—hanged herself in the one plumbed
back room of her house having made it
just as long as I have on this earth.

Something else I don’t know much about.
She waited awhile, until her girls
were grown. She didn’t leave a note. Women

in my family are like the bears I
haven’t seen yet this season. You can’t
foresee their comings or their goings.

Rumor was she blew him after Geometry
out behind the baseball diamond, a kind of place

it confused me to learn existed. Not beautiful—
homely is maybe what you would have called

my best friend. Her parents’ house was filled
with leaves and the smell of vegetables. And I spent

more hours stretched across the rug of her attic room
than I did in my own bed. Did I ask her about him then,

our bodies parallel on the floor as we examined
the seam of her ceiling, her straw-like hair quivering

with the tic that twisted her face when nervous
or even happy, its flutter just at the edge of what

I could see without turning my head? I don’t
remember. All I know is that she never told me.

I didn’t understand shame or silence then.
Those days my luck was a short rope holding me

always too close to myself. Who cut it is another story
or the same one, depending on if you ask.

It is not a skirt.

And if it is a skirt, what of it? The Western gaze can be narrow and self-righteous.

In Burma, where it is traditionally worn, my husband and I have worn the longyi, a cylindrical cloth that snakes down to the feet, held in place around the waist by folding the fabric over without a knot. Its cousins are the Indian lungi and the Malay sarong.

I regard the longyi as masculine garment: the way it’s anchored in a bundle up front, announcing its form. Like a flower over the loin.

I love how it slims the hips, hugs them not unlike a corset, although not as binding. Rather, I find the longyi freeing, enabling breathing room. It sits below the waist, elongating the torso. Actually, it isn’t like a corset at all.

We were touring Bagan, an inland city in the western Mandalay region where over 2,200 Buddhist temples, pagodas, and monasteries from the 11th and 13th centuries dotted the plains. They remained sacred, active places of worship.

At the time of our visit in June 2015, Burma had only recently opened up to tourism. Foreigners were allowed in a handful of places. Yet tourists were catered to. To be a tourist was to be swaddled like an infant. And as an infant one made Western demands.

David selected a modest dark purple fabric. I chose a thin-lined, tiny-squared plaid with shades of the oranges and browns of leopard skin. To wear the longyi, the sellers showed us how one needed to put one’s lower arms into it, pulling the opposing sides of the sewn cylinder, gathering the fabric, then crisscrossing the two sides as if folding bed sheet fresh out of the dryer.

Throughout the Burmese day, men tied, untied, and retied their longyi. Ritual of social propriety. Dance between unraveling and the body.

I was a dunce at tying the longyi, but Burmese men were more than happy to help. At a vegetarian restaurant, Be Kind to Animals The Moon, a willing young man—who spoke English accented with a curious mix of British clip and Southern drawl—assisted me. Inside, I burst into C.P. Cavafy: “At beauty I have gazed so much/that my vision is filled with it./The body lines. Red lips. Limbs made for pleasure.” Or “this aesthete of a boy with his blood so fresh and hot.”

In the sweltering heat, men walked or sat with their longyi tucked between their legs, the extra fabric belted around their waists.

Tucking steered my thought to drag.

On my 30th birthday, I wore a borrowed wool tartan kilt, suited for the early December chill. Good friends and I feasted at Mario Batali’s restaurant in Greenwich Village. In line for the bathroom, the man in a tailored suit in front of me asked whether I was wearing anything underneath. Then, throughout the carousing, cosmopolitan night, the same question was posed repeatedly. Clearly I was not Scottish.

The kilt was kitsch to me, partly, yes, but worn with want and in celebration. I had recently come out as gay and the kilt served as an intermediary with its burly heft like pelt and cone shape that twirled into a horizontal propeller. How warm it made me feel. How free and unconventional.

I’d slipped into skirts before when I was circumcised at age twelve in the Philippines. A skirt—my mother’s, grandmother’s or my sisters’—kept the wound clean and aerated for proper healing.

On a motorbike in Bagan, my longyi funneled cool air and red dust, flamenco on wheels.

Burmese men wore the elongated fabric either slung over their lower arms like protrusion of folded skin, or as sash over their shoulders.

I stood, arms raised in the air. Brown arms circled my waist, weaving. From the back, the groping and tightening at my torso. I had become his body. We comprised of three rings, haloed by a flickering current. He wound the longyi securely, plunged fabric down to my loin. Tucked in the front. Fluffed the flower.

John Freeman is the founder of the literary annual Freeman’s, and an executive editor at Alfred A. Knopf. He is also the author and editor of eleven books, including Dictionary of the Undoing; There’s a Revolution Outside, My Love (co-edited with Tracy K Smith), and Wind, Trees, a new collection of poems. His work has appeared in The New Yorker, The Paris Review, and been translated into more than twenty languages. Once a month he co-hosts the California Book Club for Alta, an online discussion of a classic of Golden State literature. He lives in New York City.

Keetje Kuipers is the author of three collections: Beautiful in the Mouth, The Keys to the Jail, and All Its Charms, which was a finalist for the Washington State Book Award and includes poems published in both The Pushcart Prize and Best American Poetry anthologies. Keetje has been a Stegner Fellow, Bread Loaf Fellow, and the Margery Davis Boyden Wilderness Writing Resident. She lives with her wife and children in Missoula, Montana, where she is Editor of Poetry Northwest and a board member at the National Book Critics Circle.

Joseph O. Legaspi, a Fulbright and two-time NYSCA/New York Foundation for the Arts poetry fellow, is the author of the collections Threshold and Imago, both from CavanKerry Press; and the chapbooks Postcards (Ghost Bird Press); Aviary, Bestiary (Organic Weapon Arts); and Subways (Thrush Press). He cofounded Kundiman (www.kundiman.org), a national organization serving generations of writers and readers of Asian American literature. He lives with his husband in Jackson Heights, Queens.