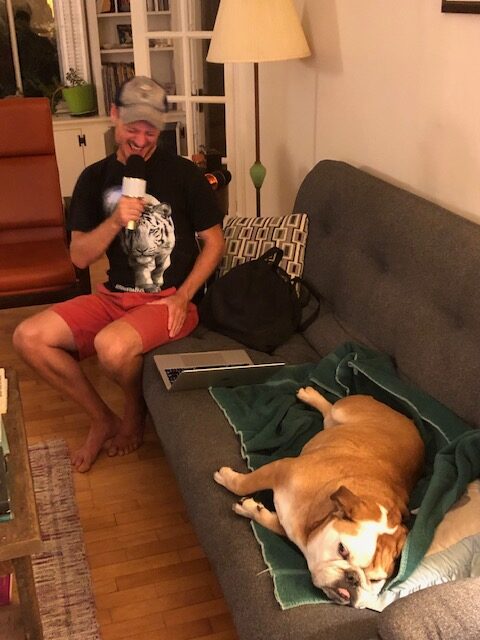 Power, which hides what it can
—George Oppen

A kind of hangar by the mall.
Propulsive dance hits
looped like the 80s never ended—
B-b-b-b-b-baby, I-I-I-I can’t wait…

A shimmering wall through which
the latest Nikes, Reeboks, and Adidas
parthenogenetically appeared, manifesting
some new sports need—I’ve got the power!…

1994. Lights spun
over the towering echelons,
to which we raised our eyes

from The Combat Zone,
i.e., sales rack off to the side
of the main event.

Like adolescence itself
wanna try that in an 8-and-a-half?
(pierced ears, a silver chain,

I was fourteen), threshold
through which all must pass,
where there was no hiding

the rifled-through shoeboxes,
the desperation and shame.
Pierced ears, a silver chain.

Out in the night Steve was waiting
in his pickup—rockdove, bellmetal,
stripped-down primer gray groomed

to a secrecy so irretrievable I can’t remember
why he was parked at the Applebee’s
three parking lots over,

what happened after I got off,
what concert, if we ever made it.
I see him in the cab, the empty lot

sloping down to the parkway
thickening with the night’s traffic.
His look that says I’m lucky, I’d be lost

crossing these deserts without him—
the world’s blank patchwork
of parking lots, its power suit

where nothing grows,
nothing retains any water,
running off like debt

sold the world over. FinalLY
it has happened to me right in front
of my face and I just cannot hide it…

He could be Charon waiting for his next
customer, the petty coin of my commission
sealing my shy mouth.

Getting in, my necklace turns to lead,
an x-ray apron holding me
down in the vinyl benchseat,

he had a favorite cousin Sharon,
lived over the river in Huntsville.
He loved to tell about crossing

the bridge once at sunset. Looking down
into the mouth, the very fires, of hell.

Austin Segrest is a poet, a critic, and the author of Door to Remain, winner of the 2021 Vassar Miller Prize in Poetry. Born and raised in Alabama, Austin teaches at Lawrence University in Wisconsin.