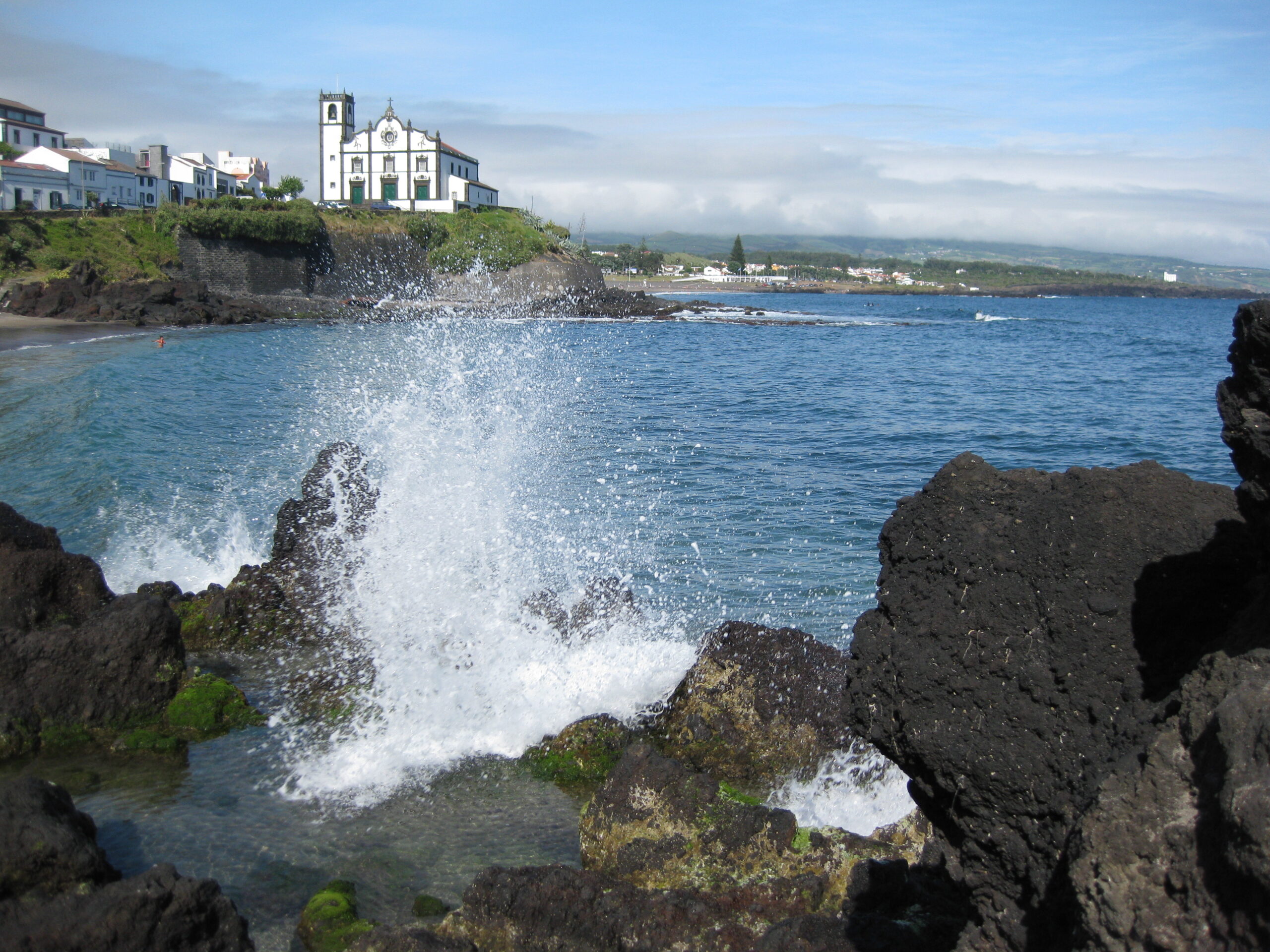 As part of this fall’s Lusosphere portfolio, The Common will publish accompanying work online. This month’s poetry feature highlights the work of three Lusa-American poets, tracing their roots back to the Azores and Cape Verde: Jennifer Jean, Nancy Vieira Couto, and Carolyn Silveira.

Climbing a stone flight in downtown Lisboa,
I dodged the disquiet
family begging on Rua Garrett
with their rehearsed moans, with their smiling smoke
breaks in the alley
by the Paroquia Dos Martires. I had seen them
and they’d seen me too—posing

the week before—in a chair at the Cafe A Brasileira
with the bronze of Pessoa. They nodded, shuffled past,
then my alma imortal sat so straight
I knew my chair
held the body
that housed my home. I felt like a queen
crab, like California. Home.

Like there are no strangers in this world.
Like meeting Maryam Mohsen at The International
in Dubai. Linking arms
on a water taxi, we owned no grips or rails
or walls between us
and the Arabian Sea. She was gorgeous
in a magenta turban and jeweled collar-pendant.
She explained the pelvic benefits of a
squat latrine
as our skiff surfed along to the Souk,
as I held myself up
with my core. I nestled into that night

like a foundation stone. Like buying my ticket to Seoul,
catching a train to Cheonshim Lake, going to a party
up a red dirt road
on Seon In Hill, above a cold autumn fog.
There were lots of seeking people there—reading
shadows on the cumulus, reading Sunset rays
over the temples below. I faced east,
found I ached like home, and I became the state of

California—like a planked pier leaning over the Pacific,
or a twilit Ferris Wheel there
elevating friends
in a gently vertical turn. Like me, they
hovered a little above the land—and a breeze
made all our eyes water.

Carlota wears her sister’s life like skin,
a snug imprisonment. She wanted less

surety, wanted not to be
moonservant to a planet on its boisterous

orbit. But Maria Conceição’s
children were easy, their faces

bowls to be filled. And so
once the dispensation had been granted

she married him, her sister’s widower,
brother by affinity but not

by consanguinity. He was, at least,
good-looking. She was young, she did her job,

she made the soup. When the babies came
she fed them. He was always off

driving his mules or singing in those silly
contests. She was the one they circled

holding up fingers to be bandaged,
confiding fears and dreams. She scrubbed the purple

stains of fear, but dreams make a soft shimmy,
blank as milk. So she curdled milk,

ladled it into molds and drained the whey
and waited. In the morning

they had fresh cheese with their breakfast bread.
These are your dreams, she said.

If you eat your dreams, you will live
your dreams. What did they know? They thought

she was the earth because she was the mother.
That was when she knew her sister’s life

had flaked and peeled away. Her arms were tanned
and strong, and she was hungry. She sprinkled

sea salt on the surface of her piece
of cheese and she ate it with a knife.

In Portugal, they were gifting traditional
dogs to goatherds who had lost
their way. My father was no
goatherd. My father, far away

in California had nightmares
about blackberries: They rose early to pick him
clucking in Portuguese, which he could not,
would not understand.

My father drank beer in a pickup,
chased by a dog he could not have
called
cao da Serra da Estrela,
though she could have been a
cousin, barking as his brother
drove them
up the dirt road, the
stars untended and
grown wild
on the black field above the three.

Jennifer Jean’s poetry collections include The Fool (Big Table) and Object Lesson, forthcoming from Lily Books in 2021. Her teaching resource, Object Lesson: A Guide To Writing Poetry, is also forthcoming in 2021. Jennifer’s awards include: a Kenyon Review Writers Workshop Fellowship, a Disquiet FLAD Fellowship to write and study poetry in Portugal, a “Her Story Is” Residency—where she worked with Iraqi women artists in Dubai, and an Ambassador for Peace Award for her activism in the arts. Her poems and co-translations have appeared in Poetry Magazine, Rattle, Waxwing, Crab Creek Review, Green Mountains Review, and more. She’s the translations editor for Talking Writing Magazine and lives in Massachusetts with her husband and children. For more info, visit jenniferjeanwriter.weebly.com or follow her on Instagram and Twitter @fishwifetales.

Nancy Vieira Couto has published a full-length collection of poetry, The Face in the Water, and a chapbook, Carlisle & the Common Accident. Her poems have appeared in magazines and anthologies, including Prairie Schooner, DIAGRAM, Southern Review, The Iowa Review, Mississippi Review, and The Gávea-Brown Book of Portuguese-American Poetry. She lives in Ithaca, New York, where she is poetry editor of Epoch.

Carolyn Silveira is a writer and poet whose fiction, reviews, travel writing, and radio work are scattered around the internet. “Central California” is her first published poem. She served on the editorial staff of the journals Anderbo and Lumina’s multimedia edition, Lux, and is a proud past participant in the DISQUIET and Byrdcliffe residency programs. She has worked for social change organizations like Freelancers Union and Upworthy and in the domestic worker movement.