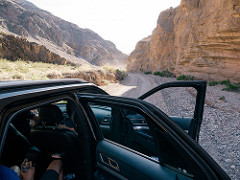 There were four of us, following a dirt road which began
in the foothills and went right up into the mountains
where a little cottage was waiting for us. We were driving
slowly, packed in a blue hatchback, and it was getting late

and the rain, which had started earlier, had begun to really
pelt down. And then, coming round a sharp corner, we lost
our grip, the wheels skidded, wrestling with the thick
white rain, the mud.

The driver, my friend, said “whoa” like you’d say to a horse,
and lifted his hands from the wheel. And I remember
as the car began to spin the mountains turned green,
and as it edged slowly towards the end of the road,

we leaned, as you do in films with a car at the edge of a cliff,
watching through the windows, mesmerised, as the valley opened up
in a passionate, open-mouth kiss. We should just have tumbled in,
but instead were left unfallen, not yet dead, with the radio still playing.

The driver, my friend, looked green. Our Death was not (as we’d
imagined) the blue car descending the steep gorge-without-ladder,
slipping like a dangerous dress-strap or a crap hand of cards
flung down in disgust. We’d stopped too soon,

left still as rocks, as upturned beetles wriggling their legs,
or the roadside cows chewing slowly. The driver, my friend,
lit a cigarette and sat down. The rain looked on with big cow-eyes.
Not-dying is suddenly being very hungry

and wet brown shoes caked in mud but not caring
and the mountains feeling slow and the heavy grey clouds
like a washerwoman sprinkling cotton before ironing it flat.
Our Death was pure mathematics—

the steep angle of the cliff which didn’t meet the speed of the car—
Our Death was a thing measured in increments, about 66% death
and 33% not-death (just a bit deathy). Probably, we decided,
the mosquitoes in this heat would’ve sucked us dry

before our death got to us anyway. It was just a slip of the wheels,
we said, a skid, perhaps we’d made too much of its nearness.
Our Death was just a minor character, someone who appeared
about ten miles after a town called River-Without-End, then went on.

And we felt quite energetic after that. It was hot. It was exciting,
what didn’t happen that afternoon. We went hiking
and found a waterfall and fell from it
into deep black pools, lying underneath.

Katharine Kilalea is the author of One Eye’d Leigh, shortlisted for the Costa Poetry Award and longlisted for the Dylan Thomas Prize for writeers under 30.