I don’t think I understood the idea of a “love-hate relationship” until I moved to New York City. Over the years I have become one of those obnoxious people who talk constantly of leaving New York while at the same time shutting down all possible escape routes. Having grown up in a small town, I can tell you that this flavor of self-delusion is not unique to New York City, but perhaps it happens in greater numbers here, simply because New York is host to so many outsiders — outsiders who eventually become insiders. 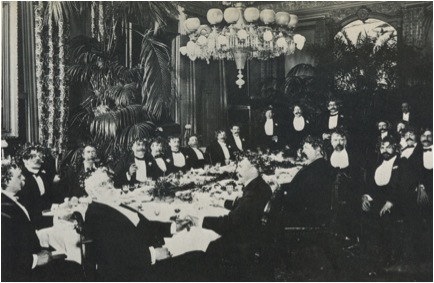 Before I bite off more than I can chew, I’ll just defer to The Great Gatsby, and also to E.B. White’s famous essay, Here Is New York. I was recently reminded of this essay while reading Janet Groth’s memoir, The Receptionist, which reflects upon her employment at The New Yorker, where for twenty-one years she worked as an assistant to the magazine’s rotating cast of writers and cartoonists. Groth quotes White’s essay in her memoir’s introduction, identifying herself as the archetypical New York outsider:

In Here Is New York [White] divides residents into three types. The first are the native born, the second the commuters, and the third — the source of the city’s vitality, élan, and magical “deportment”— are those who come to it from the hinterland, the ones for whom the city is their destination, “the goal.” I came as one of the third type.

The Receptionist tells the story of Groth’s transformation from naive outsider to disillusioned insider. But hers is an old version of New York, with an older portrait of insider-outsider dynamics. For a fresh look at New York from an outsider author with an insider perspective, I recommend Sergio De La Pava’s novel, A Naked Singularity, which is told from the point of view of a Manhattan public defender. As a real-life public defender, De La Pava is an outsider only in the literary sense, having self-published his book after years of rejections. (For the whole story, check out this excellent profile of De La Pava, at The Millions.) This past spring, the book finally found a publisher with The University of Chicago Press, but it still has the flavor — in the best sense — of an unedited work. The book is packed with dialogue — salty, New Yorky dialogue — and long digressions about everything from the best recipe for empanadas to whether or not Jesus would use television to announce the Second Coming.

The rise of literary self-publishing always makes me think of Walt Whitman, who self-published his best-known work, Leaves of Grass. Born in Long Island, and later a resident of Brooklyn, Queens, and New Jersey, Whitman is the ultimate New York outsider-insider — and one whose vision of New York still remains vital. In a recent essay for New York magazine, Mark Jacobson quotes Whitman — “Ah, hills and slopes of Brooklyn…more valuable than your owners supposed” — as he mulls over the ways that Brooklyn’s rising real estate values have changed the character of the borough, especially in light of the new Barclays Center. It’s a question Zadie Smith also addresses in her profile of Jay-Z, whose concerts opened the center last week. At the other end of the spectrum, former Brooklyn poet laureate Dennis Nurske celebrates an older, grittier Brooklyn in his new collection, “A Night in Brooklyn.”

And speaking of the poetry of place, I invite you to take a look at this essay by Stefany Anne Goldberg, who finds herself overwhelmed when she returns to New York after a year abroad in Sri Lanka. There’s something Whitman-esque about her prose in the essay’s closing paragraphs, as she tries to capture New York City street life:

I wander through the drizzle, pick up some toiletries which cost a third of my Sri Lankan rent. I have some time before I meet with my beloved friend Funky, so I buy a tea and sit on a bench in the East Village and watch New York life. Everyone is funny here, this is a city of freaks, brought together by the force of their freakiness. It is nice to see people who are openly, ordinarily gay. The women are stylish and robust. But they walk so fast you can hardly get a look at them. A woman I know who runs a gallery on the Lower East Side passes me, sees me, but does not stop, she is walking too fast. To stop she would have to do something drastic with her body. A young man with a dyed red afro passes by. He is walking with a friend. He says, “I was so high earlier…off of anxiety!” And a woman wearing jean cutoff shorts and rubber boots eats her lunch from a box as she walks, hunched over her fork. Funny people. Some little sparrows hop over to me, out of the foot traffic. Hello little sparrows, I hardly noticed you in the old days, I’m sorry but I see you now, I do.

Goldberg’s essay also highlights the pleasure of being an outsider to New York. Although she laments the loss of her insider acumen, it’s clear that she is pleased to be re-endowed with a newcomer’s raw impressions. New York is unique among cities in that it welcomes both insider and outsider points of view — and allows its residents to move fluidly between perspectives.

Hannah Gersen is the Dispatches Editor of The Common.