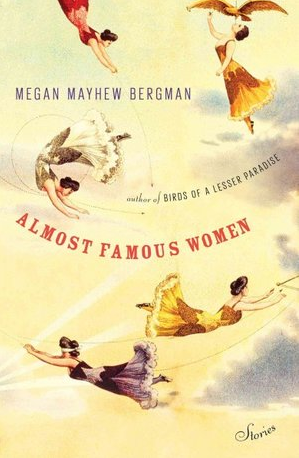 Fans of Megan Mayhew Bergman’s first short-story collection, Birds of a Lesser Paradise, which appeared in 2012, have been looking forward to her second collection ever since. The premise of Bergman’s new book, Almost Famous Women, is immediately intriguing. Bergman culled through the annals of history to locate women who brushed up against fame, thanks to proximity to famous people or now-forgotten accomplishments. Publisher’s Weekly commended her for this “feminist reclamation” of narratives largely ignored; a compilation of 13 fictionalized tales of women including James Joyce’s daughter, Lucia; Butterfly McQueen, the actress who played Prissy in “Gone with the Wind”; Allegra Byron, Lord Byron’s cast-off daughter; and Dolly Wilde, Oscar Wilde’s impetuous, drug-addled, niece.

The title seems to imply unjust neglect. After reading the collection, this reader wondered whether these narratives hadn’t been ignored or forgotten for good reason. As described in these tales, the women Bergman chose didn’t necessarily live extraordinary lives or create works of art that beg reconsideration; their stories seem to have been marginalized because there wasn’t much to say about them beyond that their lives were sad or disappointing. Bergman’s fascination felt arbitrary and it begged the question, why these particular women?

Internet searches revealed subtle linkages that were not disclosed at all, or were merely mentioned in passing, in the book. Several of the women—Dolly Wilde, Romaine Brooks, Joe Carstairs—knew each other or knew of each other or were lovers and ran in the same circles at a time when women who chose to live openly as bisexuals, lesbians, or artists were ostracized or, in the best case scenario, sidelined. It turned out these women had lived surprising lives, so why did most of these stories fall flat?

Let’s start with the stories that worked.

“The Autobiography of Allegra Byron” is a moving tale of neglect and redemption. In 1821, Lord Byron deposited his three-year-old daughter, Allegra, in an Italian convent. Told from the perspective of her caretaker, a nun who lost her own daughter and husband to typhus, the narrator’s emotional attachment to her young charge, and the great lengths she goes to make Allegra’s short life, and, by proxy, her own, bearable, makes for a compelling story.

However, it’s not Allegra’s story. It’s the story of the nun who cares for her, and who is never named; the person who is chagrined that Lord Byron takes such little notice of his child when she is grieving the loss of her own.

In “Romaine Remains,” the artist Romaine Brooks is depicted late in life, alone and withered by age and disease, at the mercy of a rotating, indifferent staff, but still demanding and egomaniacal. A harrowing account of narcissism and the perils of living long and selfishly, this story is offered by the houseboy, Mario, who takes advantage of Romaine towards the end of her life.

To someone who doesn’t know anything about the historical Romaine Brooks, this reads like the tale of a bitter, old lady. (Brooks was a wealthy but deeply unhappy American painter who lived in Europe and died in 1970 at age 94.) Since the story doesn’t elucidate for the reader why she deserves reconsideration, it could have been even more moving as a purely fictional tale. Without the constraints of “history,” Bergman could have really sunk her chops into the old woman.

“Norma Millay’s Film Noir Period” recounts the life of Edna St. Vincent Millay’s sister, Norma, relegated to the literary sidelines by her own negligible talent. This narrative about sibling rivalry, fame, and the aftermath of drug addiction is just plain sad. Norma also wrote poems but, unlike Vincent (as she called herself), never received “letters in the mail, full of praise and promise,” and her later years are marked by quiet desperation. She has been handed the short straw, and she knows it. She spends the rest of her life after Vincent’s death, caring for her legacy and eschewing her own needs. Again, it’s not clear why Bergman found her story compelling, but it is an entertaining tale because of Norma’s take on Vincent.

In contrast to these fully rendered stories are the less successful ones recounted by friends or acquaintances, who appear to be little more than reporters delivering news accounts of their subjects’ lives.

In “The Siege of Whale Cay,” Joe Carstairs, a purported lover of Marlene Dietrich, is portrayed much the way Variety magazine might have described her, as a “womanizing heiress who was born in 1900 and spent most of her life prevailing over her own private Caribbean island wearing a machete across her chest, chasing shrimp cocktails with magnums of champagne every night.” The story is narrated by Joe’s lover, Georgie, a woman whom Joe “plucked” out of a mermaid tank in Sarasota. Georgie is grateful for her new glamorous life and enamored with Joe. Georgie oscillates between bravado and intense jealousy when Dietrich shows up on a yacht and temporarily upends their romance.

The plot centers on the arrival of Marlene Dietrich, Joe’s affair with her and Georgie’s jealousy. It struck this reader as melodramatic. Again, one could have gotten past that if provided with some insight into what made Joe tick. If Joe had been imaginary might Bergman have allowed herself to delve deeper into her psyche? One wishes she’d have found a way. Depth of character was one reason her first collection Birds of a Lesser Paradise was so memorable.

As it is, this story ends with depictions of Joe on the floor of her closet wracked by memories of ambulance driving during World War I, “a cache of guns and knives at her feet”; Joe, quaffing Champagne, while an island woman screams in agony during childbirth; Georgie plaintively stating that “life with Joe never lasts,” then leaping into a roiling sea to catch her attention. The characters all play to type, from the machete wielding masculine Joe to her retiring, mermaid lover.

In “Who Killed Dolly Wilde?” Oscar’s niece Dolly is found dead and the unnamed narrator telling her story doesn’t reveal “who done it” until the end. The story is told by an heiress who loves Dolly and pays her expenses, but is superfluous to the story and to Dolly. The story never reveals exactly how old Dolly is, but we know she is aging, a drug addict, and has cancer.

Dolly is a complete mess. Every night, she shoots up despite the cancer, vaguely described. The narrator claims that Dolly always had the ability to transfix those around her, but it’s not apparent how or why. All we get are descriptions like this from her narrator/admirer: “Dolly was the exclamation point in my life. She made me feel things: adoration, anger, frustration. She was always in love and it made her glow.”

Other than her relationship to Oscar Wilde and the fact that she resembled him in looks, why should we care about Dolly at all? The narrator says that Dolly also had writing talent, but again the only proof we get is a paragraph or two, which doesn’t seem like enough of a reason to include this person in an anthology of “almost famous women.” Surely there were women throughout history that had more going for them? Perhaps if Bergman had chosen someone show-stopping, she would have felt more invested in her characters, and readers would too.

“The Pretty, Grown-Together Children” should have been riveting. It’s told from the point of view of Daisy Hilton, a woman conjoined at the hip to her twin sister, Violet. The twins performed in vaudeville and burlesque shows during the first part of the 20th century and were exploited, shunned, shown-off and finally left for dead. Surviving into their sixties must have been an extraordinary feat. And then there’s the accomplishment of getting through each day attached to someone else—enough of an ordeal in childhood, but seemingly unbearable once adult desires come into play.

Violet wants to have sex with her fiancé, Ed—and Daisy has no choice but to tag along. The reader doesn’t experience this at a visceral level. Was Daisy turned on? Was she mortified? How did Violet and Ed even manage this feat with another body attached? The mechanics here beg description, but all we get from Daisy is this: “An hour later they had moved to the bed. I watched the clock on the wall, recited Byron in my head.” We are observing her from the highest balcony at one of her shows.

“Saving Butterfly McQueen” centers on the story of the last years of the actress who played the timid slave, Prissy, in “Gone with the Wind.” McQueen was a formidable person in real life, an atheist bent on donating her body to science, however, we learn little about her convictions here. Bergman has chosen to tell McQueen’s story from the perspective of Elizabeth, a former evangelical turned medical student who used to knock on McQueen’s door when she was proselytizing.

Is this a story about McQueen or Elizabeth or both? It’s hard to say because there are long passages devoted to Elizabeth’s preaching and the reason she preached and even her transition to medical school—all facts about this fictional person who met McQueen once. It’s hard to ascertain why one should care about Elizabeth at all. If this is McQueen’s story then Elizabeth is the wrong narrator. She has no insight into McQueen and can only tell the reader what she picked up third-hand and during one conversation that took place when McQueen answered her door. Later, when Elizabeth has turned away from preaching and entered medical school, she says, “I know so little. I still catch myself looking away when a slide comes up of necrotic tissue or reveals the yellow tint of a swollen limb.” This is also how Elizabeth operates as narrator.

Bergman, too, seems to look away when she comes too close. One of the joys of historical fiction is the sense of inhabiting the past through the characters, who don’t need to be famous. But they do need to be interesting.

Kelly Fordon’s poetry, fiction, and reviews have appeared in The Boston Review, The Florida Review, The Kenyon Review Online, and Rattle among others.