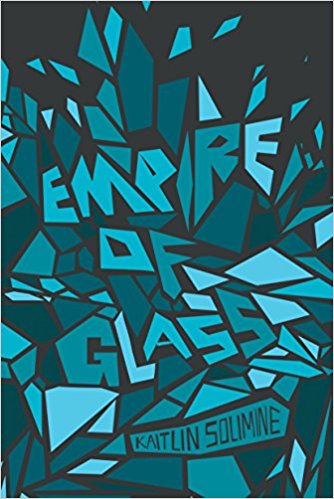 The disclaimer hones in on this genre-defying, generation-spanning, brashly experimental debut novel’s favorite motif: lenses.The title itself refers to the profession of two of the characters, glass-grinding, but lenses pop up in other forms in scene after scene, in hands, spectacles, in microscopes, telescopes, and cameras, shaping and reshaping the way we see Solimine’s characters and their storylines. Empire of Glass’s central protagonists are Lao K’s homestay father, Wang Guanmiao, and her terminally ill homestay mother, Huang Li-Ming, who (we learn in the book’s preface) charges Lao K. with assisting her suicide and, some years later, translating her “strange, hodge-podge book” into English. It is this “translation” of a Chinese novel of the same title that Lao K purports to be sharing with and annotating for her readers.

The more traditional central storylines in Solimine’s novel trace Huang’s and Wang’s respective paths to one another (and Lao K) against the richly textured and often harrowing backdrop of post-Revolutionary China. In the first chapter, we meet Li-Ming as a schoolgirl. The daughter of a disgraced Nationalist, she is punished for her mother’s sin by being sent to a reeducation camp in the country where she spends much of her time tending pigs.

The story of Lao K’s homestay “Baba” starts with his early days as a street vendor of the optical lenses ground by his own father. As the novel progresses, Wang and Li-Ming struggle through the turbulence of Mao’s China, through war and re-education, political and familial struggle, eventually meeting, wooing, and wedding. A third thread comprised of letters from Li-Ming to Kang-Lin after the two are abruptly separated as young girls is woven between these two. Meanwhile, Lao K’s own story—that of a troubled exchange student who finds both solace and sorrow with her Chinese host family—unfolds in footnotes, a device Vladimir Nabokov used in Pale Fire to a somewhat different effect. There Charles Kinbote (the self-appointed editor and commentator of the poem of the book’s title) uses the device to effectively hijack a dead colleague’s work for his own possibly unhinged purposes. Lao K, in contrast, clearly intends to supplement and amplify Li-Ming’s novel. The notes darts back and forth in time like a minnow, alternating bits of Lao K’s life in America and in China with reflections on Chinese characters, language, and poetry, plus her musings on how to help Li-Ming end her life. (“How strong a rope would I need? And where in Xinjiekou can I find a hardware store?”)

It seems clear that Solimine felt she needed this device to avoid the appearance of cultural appropriation, and the footnoted storyline should feel compelling in its own right. There is certainly drama in a depressive sixteen-year-old American charged with facilitating her dying homestay mother’s suicide. But this remains the most obscure of the novel’s many story lines. Similarly obscure is Lao K’s motivation for translating into English her late homestay mother’s novel—which she receives from her homestay father only after returning to China for the memorial service.

The problem is that it feels like a repository not only for Lao K’s carefully non-appropriative voice but for ideas and anecdotes that don’t fit organically into Empire of Glass’s central narrative of two survivors of China’s Cultural Revolution finding their way through the tumult, violence and extremism to one another. These authorial musings range from to Virginia Woolf’s pre-suicidal mindset to ornithological physics:

43: What is the weight of a bird? Twenty years after Li-Ming’s death a flock of storks nearly took down a passenger plane heading from Istanbul to Singapore. I wonder: if Kinetic Energy is KE=1/2V^2 and m is the bird’s mass and v is the true air speed of a plane, how many red-crowned cranes does it take to kill three hundred and thirty five people?

More compelling are the visceral depictions of China during the Cold War era from the historical storylines. Here’s the reason for Li-Ming’s relocation to a re-education camp in Jiangxi province:

She and her family had been listed “black” because her mother once signed her name to a Nationalist Youth Party list long before Li-Ming’s birth—it was another member of his danwei, frown-faced Mrs. Xu, who reminded everyone of this during the Destroy the Four Olds Campaign. After Li-Ming’s mother was the victim of a virulent public struggle session, Li-Ming was sent down to the countryside with other children of questionable backgrounds from her graduating high school class, the class his generation called the Old Threes because they hadn’t studied past their third year of high school.

Equally unflinching is the depiction of a gang rape of an American woman, led by Wang’s direct superior, Li. The woman, possibly a nurse, has been captured by Wang’s military unit during the Korean War:

American Nurse’s mo-gui eyes blinked. Liu ripped a swatch of cotton from his shirtsleeve then slid it across her chin in a makeshift gag. She stomped her foot. He prodded beneath the fabric to touch her lips then reached into her mouth, tracing her gums and teeth like a cartographer to map.

“What you got down there?” he asked in mock adoration.

She clamped her jaw.

Still in his teens, Wang finds himself a reluctant participant in the attack. Unable to back out, he engages in an act of moral contortion that is almost as painful to read as the rape itself, convincing himself that he is in love with “American Nurse” and building her into childish fantasies:

He’d show American Nurse: Sword Temple with its stooped monks kowtowing before the golden Buddha and the gifts of oranges and dates, the Xiao’s rows of fermented tofu steeping in wooden cauldrons, the river where his brother once pulled him from the weeds after he attempted to swim downstream without knowing a single stroke. And the mountain. The tall, towering mountain where his mother’s body rested, peaceful, except for the occasional earthquake tremor, the mudslides arriving each May.

Solimine’s authorial lens is at its sharpest in such complex moments. Nabokov said that “the three facets of the great writer—magic, story, lesson—are prone to blend in one impression of unified and unique radiance, since the magic of art may be present in the very bones of the story, in the very marrow of thought.” Scenes such as this one tell us a story we haven’t heard, teach us about its historical moment, and imbue it with enough literary magic that we recognize our own flawed humanity in its violence.

At her best, Solimine crafts luminous yet defined descriptions:

Bejing wasn’t as gray then—yes, the populace wore tans, olives and navies, and Tiananmen’s bloody stains were only recently painted over, but there was an energy to the wide boulevards filled with bicyclists and yam vendors and smells you hated at first then yearned for decades later when they were replaced by car exhaust and factory run-off from the suburbs. That energy was humanity.

Elsewhere, though, the balance feels off. In places, Solimine packs so many narrative threads and so much experimental imagery into her scenes that it becomes hard to figure out what, exactly, she’s trying to tell us, and over many pages, this can be wearing. For instance, the almost clamorously busy moment when Wang first meets Li-Ming at her reeducation camp, where he has been sent to deliver a letter from her father:

He smiled a pool of feeling at his feet. He shuffled the earth to return gravity to his limbs. The Party officials called this girl naoteng–mischievous–in her official report and he saw what they meant; there was something unnerving about her smile. This fit with her name, which meant “daybreak” because, she told him years later when there was time enough for the magic of this moment to be forgotten, she was born just before her hometown Nanjing was liberated from Nationalist rule. He later wondered: how could her stodgy mother have such a poetic heart? The girl standing before him was indeed like the early morning sun, tossing petulant light over everything around her. But she looked nothing like her father. He’d met the elder Huang just once in a crowded hallway of their shared danwei, a glass-grinding factory built after Liberation. Her father was short with words, square-shouldered.

Other constructions simply don’t track: “Tenderness bruised his neck, cobwebbed kisses only a practiced lover could make of his boyish body.” And, “His grimace pulling a tentative grin.”

Perhaps inspired by Chinese literary imagery, these phrases are imprecise enough to give a reader pause (how can kisses be cobwebbed or a grimace “pull” a grin?). Ultimately, they confuse the narrative —and in Solimine’s already-complex and multifaceted world there is little room for further confusion.

This for me was the central problem with Empire of Glass: while there is much reward to be gleaned from this copiously researched and passionate novel, lyrical aspiration and literary experimentation tend to get in the way of the searing and extraordinary stories Solimine clearly wants to tell. I came away impressed by her understanding of Chinese history and culture and moved by her obvious love of the country and its people, though I remain haunted by the masterpiece I sense lies beneath her glittering reimaginings, reconfigurings, and re-reflections.

Jennifer Cody Epstein is the author of the historical novels The Gods of Heavenly Punishment and The Painter From Shanghai. An adjunct professor at Columbia University’s MFA Writing Program, she is currently working on a novel set in 1930’s Berlin.