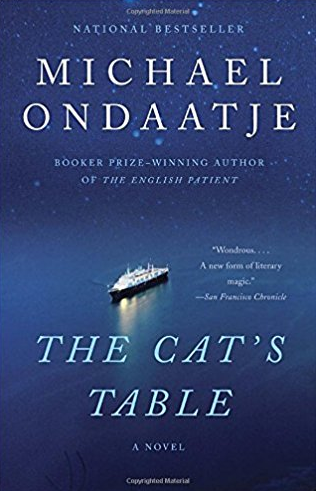 The boat, and the memories of my own years by the sea, set the tone for my reading of The Cat’s Table, which on the surface is about a sea journey that Michael, the protagonist, takes from Sri Lanka to London, to meet his mother whom he’s not seen for five years. (The author, in the end, makes a note that while the narrative may be “colored” by elements from his life, it is clearly a work of fiction, even though the protagonist is his namesake.)

The notion of his destination soon fades out of Michael’s boy’s imagination as the immediacy of the life on the ship—called the Oronsay—claims, at once, his senses and thoughts. With Cassius and Ramadhin, boys of his own age, he becomes a spy who hides in lifeboats and watches the prisoner on his nightly walks; he spies on his cousin Emily, who is initiating a tumultuous relationship with a member of the onboard performing troupe; he smokes on a broken chair; he dives into the pool to collect freshly washed spoons; he has Ramadhin tie him and Cassius to the deck in the middle of a storm, the ferocious water and howls from the storm and the sea drowning out their cries for help. There is the adult world that he learns from merely by observing: Mr. Daniel, who has his own private garden of exotic herbs and plants in the basement of the ship; Asuntha, the deaf girl, who is guarding a critical secret about the prisoner on board, and who would “take the tremor of air and interpret it into sound, then words;” Miss Lasqueti, who wears a leather jacket in which she carries her pigeons. Most of them he meets by sitting at the Cat’s Table, the least-preferred table on the ship, farthest from the captain’s table.

A short while ago, I did a tarot card reading for an old client. He got The Fool card in the fourth position, and I warned him against being gullible. “But last time I got the card you said it means I must take a risk,” he protested. I explained to him that the last time, the card had appeared in the second position. “The card is the same, but its meaning changes, it shifts according to the position.”

The inconsistent behavior of the adults around Michael complicates his perception of them. Miss Lasqueti throws more than just mystery novels overboard. She carries not just pigeons, but a gun too. She calls Michael and Emily to her room and he sees a Buddhist figurine with a scar across its belly. Why does Mr. Mazappa, the ship’s pianist, choose to get off the ship? Why does Mr. Daniel replicate the postures of his plants? Why does Mr. Fonseka never leave his room? And why does Hector de Silva, traveling under a curse, trying hard to save his life, choose to reveal to his wife secrets that he had never before shared? Not all of these questions are answered, nor do the answers always matter. We are given enough of a hint to understand that these people have been damaged or defined by who they once were.

Michael’s most defining relationship is with Emily. When he brings on board a dog that bites the affluent Hector de Silva, it is Emily he chooses to confide in. There is a moment of tenderness where he weeps on her shoulder in complete surrender. Never before, nor after, does a space of vulnerability open up between the two, perhaps not until years later, when Michael meets Emily on an island. She is divorced then, and no longer the girl who, for Sunil and his troupe, stood atop a walking human pyramid on the ship.

The adult versions of the shipmates he encounters later in life are seen as having misplaced loyalties. Miss Lasqueti’s letter reveals her dangerous past; Ramadhin, who has an unstable heart, dies when trying to protect his student, Heather Cave. Ironically, the only one to have come out unscathed is the reckless Cassius, who goes on to become an artist.

There is a movie screening on the ship, with reels shared between the upper deck and the rest of the ship, so that even as those watching the alfresco screening see a given section of the movie, they hear echoes of the next section from the upper deck screening. In the end, a storm tears the screen away and sets it afloat on the sea, leaving a projector that casts its images on a far-off sky. This memorable incident reflects this double-sidedness of people, their past constantly echoing into their present and future selves, a vagueness that strives for, but never quite achieves, a tangible sensibility.

The Past. An Anchor.

Michael is a boy of ten, shifting away from his home in Sri Lanka permanently, to live with his mother in London. On the ship, he longs to return to the home he was born in, and where he spent his early years. Later, as an adult reflecting on the sea-bound journey, he says, “grandeur had not been added to my life but had been taken away. As night approached, I missed the chorus of insects, the howls of garden birds, gecko talk. And at dawn, the rain in the trees, the wet tar on Bullers Road, rope burning on the street that was always one of the first palpable smells of the day.” It is a longing for the past that makes the child Michael befriend Mr. Fonseka. The smell of a burning rope of hemp, a smell of his hometown, draws him to the cabin of Mr. Fonseka whose manners and accent were a “product of the island.” By quoting from long ago stone slabs and papyrus, Mr. Fonseka installs in Michael a love for stories and poetry.

Taking advantage of the population that a ship like the Oronsay can potentially carry, Ondaatje populates his crew with minor characters we get pithy glimpses of. There is the Russian girl, who in the mornings skates across the upper deck, and the Assistant of Hector de Silva, who loses his glass eye in the storm. These story people serve to reinforce the overarching themes: that the past is looming over the present—a present-continuous—and that the choices of trust, particularly those made when one is vulnerable, become scars that one is obliged to tend to long after the consequence of the choice has come to pass. After the death of Ramadhin, years later in London, Michael decides on marrying Ramadhin’s sister, Massi. At the funeral of Ramadhin, in a house he became intimate with over the course of his childhood, he thinks Massi, observing him, “could have hauled out some perception of me from our past and placed it adjacent to what she was seeing now.” A few years into their marriage, a little before they decide on parting ways, he reads a small gesture of hers and becomes certain that they will part because “when we are searching for an example of what we no longer have, we see it everywhere.”

The Oronsay pulls into Aden and Port Said. The children get off, as do Emily and Miss Lasqueti, both posing as men. These intermittent destinations serve not only to show a new place, but also to contrast Michael’s present (on the ship) with his past. Upon seeing the market in Aden, he says, “I was used to the lush chaos of Colombo’s Pettah market, that smell of sarong cloth being unfolded and cut…and mangosteens and rain-soaked paperbacks.” It was, as he recalls, a sterner world with fewer luxuries. There are of course distractions that capture the attention of the children: the “Gully Gully man,” who approaches the boat on a canoe and takes out chickens from his clothing; carpet sellers, who offer the boys a dog to take aboard. Later, when approaching Port Said, “a sandstorm rose up and hung over us, a last gasp from Arabia.”

Another sojourn, symbolically, is the new Cat’s Table; the botanist Mr. Daniel arranges for a dinner in the area where his plants are kept, in honor of Mr. Mazappa who has left the ship. And in the thin artificial mist and partial darkness and emulated sunlight, the members of the Cat’s Table have their meal. “It was a meal none of us rushed. Each of us looked shadowed, abandoned, until we leaned forward to be caught in the light.”

Miss Lasqueti, recalling how the man she first worked for once lifted a corner of a tapestry and showed her how the colors were more brilliant on the back than on the surface, remembers him saying, “This is where the power is, you see. Always. The underneath.” Years into his adulthood, Michael visits a gallery that has an exhibition of paintings done by Cassius and discovers the underside of his time with Cassius on the boat, Cassius whose whisper Michael could never unlearn. The paintings, depicting the evening when the ship enters Port Said, are from a child’s perspective of the night and Michael feels he is watching “where Cassius was emotionally, when he was doing these paintings.”

“Goodbye,” he recalls, “we were saying to all of them. Goodbye.”

I had once taken a photograph of the sea as I saw it from my terrace in the mornings. This was years ago, before the advent of the digital camera. Now, when I scan it and zoom in on the details, I recall something of my past that I had not consciously noted before: the ships that enter the dock. The morning waves that woke me up were also accompanied by the foghorn of the ships that came to my hometown from all over the world, some here to sell us cotton, others here to take out coconuts and lobsters. These thoughts, on the transactions, would flicker in my mind briefly. And it is only now that I realize: I saw them as an echo of the dialogue the waves had with the shore. Now the ships and the goods in the port are there. Now they are not. I am there. I am not there.

JULIA LICHTBLAU
In prose that reminded me of Robert Penn Warren’s All the King’s Men, Lindsey deploys the nuances of dialect—poor white, rich white, poor black—to reveal the depravity of rich whites and the desperation of poor ones.

Curated by ISABEL MEYERS
In this installment of Friday Reads, we’re hearing from some of our Issue 20 contributors on the books they’ve been enjoying. Keep reading for their recommendations—from a Portuguese classic to a reflection on male friendship in New York City—and don’t forget to pre-order your copy of Issue 20 today.