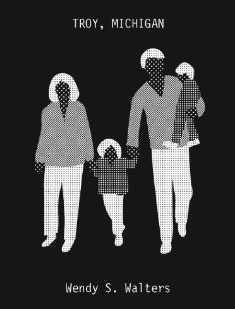 Wendy S. Walter’s Troy, Michigan chronicles municipal and personal history in this elliptically elegant collection of sonnets. This book swivels gracefully through eras in the city of the title, alluding to its mythic namesake while divulging the narrator’s observations on industry, race, and the tug of the natural world. Walters spent 15 years of her childhood in Troy, which is in close proximity of Lake Huron and Lake Erie; her father worked for General Motors.

The opening poem, “Prologue, 1970s,” is a graceful testament to the continuing relevance of the sonnet to contemporary poetry and sets the tone of the collection with its opening lines: “Imagine you love sky enough to embrace / snow in the right neighborhoods outside one / gray city.” Roughly in iambic pentameter, Walter’s lyric tendencies are shown at their best here, and the themes that preoccupy the bulk of the collection are hinted at: distance, intolerance, the intersections of geography and memory.

According to the author, the series “Founding” is based on accounts of the city’s history taken from sources such as The Oakland County Book of History by Arthur A. Hagman, city plans, and township records. Walters intertwines this historical research with personal experience. The product feels like a collective narrative, a portrait of a city and of a life within it. Walters’s use of pronouns, moving between third person and first person, plays with the reader’s sense of subject and object, diminishing the distance between reader and author and creating a complicated intimacy.

Because I was wrong to bring up the past,
the writer has drawn a version of me
that insists on being subject rather than
implement.  Please think of her face instead
of your own if you want to empathize
with my error.
(from “Character”)

A kind of layering also occurs between the sonnets, which often seem to be in dialogue with each other. Walters’s juxtapositions between nature and machine, North and South, history and memory map a complex topography, not only of a city, but of the contrapuntal intricacies of the human mind.

DON’T GO BACK TO SLEEP

Timothy Liu is an inveterate romantic. His new collection, Don’t Go Back to Sleep, charts territories of passion and consequence in both love and war. Liu’s odes celebrate seemingly all aspects of the romantic spectrum. There are poems to lovers, to husbands, husbands of lovers, bridegrooms, fiancées, therapists—even mothers. Far from being conventional love poems, they are about emotional combat: the necessary ferocity of relationships, and the intricate layers of memory that ensue.

Liu, the author of eight previous poetry collections, was born in San Jose, California to immigrant parents from mainland China. The opening section of the book, “A Requiem for the Homeless Spirits,” explores the atrocities of the Nanking massacre and history’s sin of omission:

And what do American textbooks say about First Nation genocide
beyond all those blankets laced with small pox?

And what will American textbooks say about Abu Ghraib, Guantánomo,
water boarding and extraordinary rendition fifty years from now

The immediacy of the violence that Liu describes (“vivisection without anesthesia;” “bubonic plague injected into veins;” “bayonet wounds on the back of a woman’s neck”) works as a kind of initiation for the reader to the vulnerability of the next sections, which deal primarily with sexual and emotional relationships.

In one of the six poems entitled “Romance,” Liu writes:

…If you close your eyes,
will everything simply turn
back into a dream—the safe

uncracked, towel strips
soaked in kerosene not
stuffed down your throat

while the neighborhood din
dies down?

Love in this poem is laced in fury, and the book is propelled by an irresistible narrator whose voice by turns beckons and spurns. In “The Lovers” Liu writes:

You are the angry valentine
and the envelope I cut
my tongue across while sealing
its flap shut.

You are
the bumpy rash spreading
across my shoulder at four a.m.
and the tab of Claritin
dissolving in my blood—

Weaving dream states, memories, and the declarations of an insomniac, the poet sets his ardor on the page.

The book’s section breaks are illustrated by artist Christopher Arabadjis (who also contributed the cover art); the pen and pencil drawings of repeating geometrical shapes lend the collection a delicate yet vivifying visual aesthetic.