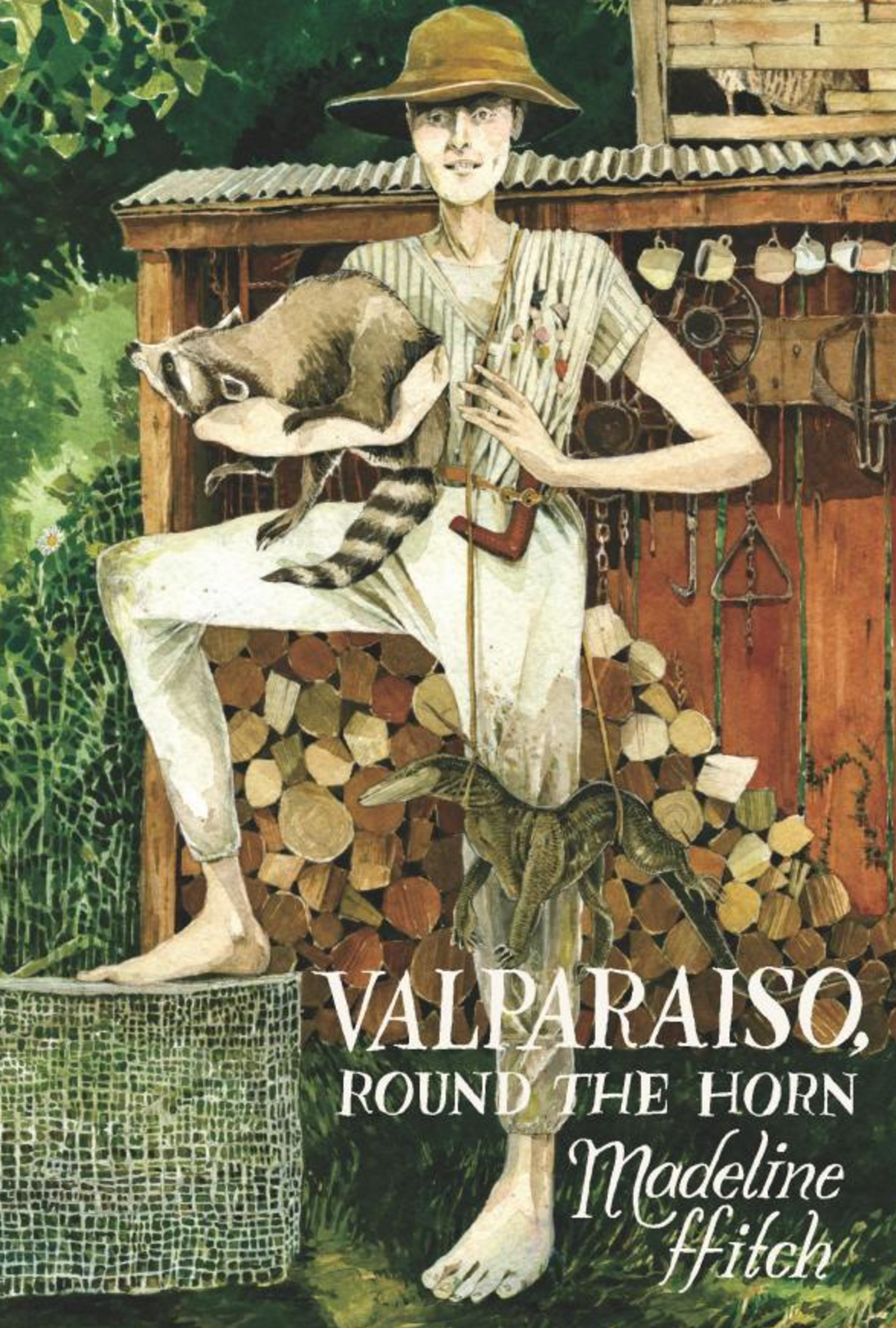 I like stories that leave me feeling I’ve encountered a living creature, or eaten a spicy meal, or sat stunned in a light-drenched temple. When a book feels like that, I want to offer a chili-studded forkful, or make urgent gestures: Feral pigs that way!

In the case of Valparaiso, Round the Horn, the debut short story collection by Madeline ffitch—which does, in fact, include feral pigs, along with myriad other wild creatures—I would hand it to you green and dripping, like a poultice of macerated plants, as an antidote to ennui.

Start with a paragraph from “The Storm Beach”:

Granddad took me in his freckled arms when I was three days old, and he sat me in Grandmother’s largest wooden mixing bowl, and he balanced his way down the black rocks to the Storm Beach. Pissing on myself and howling, I didn’t look at all like the hero he hoped I would become one day, but he baptized me in salt water, and one thing about the modern world is, you’re not allowed to just do whatever you want to do with your dead anymore….”

The speaker is Edmond, a young man living in Seattle, but raised on a wild island off the coast of Washington State. The Granddad is the dead man. Edmond has returned to the island upon Granddad’s death because he has promised to “heap up beech bark out on the Storm Beach, stick a sheaf of Winston Churchill’s best speeches in [his] breast pocket, and light the whole thing on fire.” In Seattle, you cannot burn your grandfather on the beach. On this wild and never-named island, you can—or could, if you knew how. First, though, you have to get the body out of the refrigerator where Grandmother has been keeping it and down the cliffs to the beach below.

An oath to complete an unusual task in an inaccessible place: what an auspicious start for a story. “Storm Beach” is bracing and funny and urgent, full of fisticuffs and redolent of the earth from which it springs. Just as the grandfather once carried Edmond down to the beach “pissing and howling” for his baptism, Edmond returns the favor. But after hours of arduous work—hefting the body into and out of a wheelbarrow, dragging it across rocks, fighting the tide, building a funeral pyre, beating the crabs off the dead man, and many more ordeals I will let you enjoy for yourself—Edmond cannot get the body to burn. This is a more interesting problem than any I’ve had all year.

Interesting problems in interesting places would, in fact, be a fitting subtitle of this collection. Many of the stories are set on the coastlines of the Pacific Northwest, and in the book’s most triumphant endings, characters escape to wild places. Sometimes it’s to sea, as in the title story, “Valparaiso, Round the Horn,” which is also the refrain of a sea chantey sung by a cartoonish captain who sweeps the characters off to sea at the end. Sometimes they escape to the woods, where they “sew together buckskin breeches” and “carve [their] dugout canoe for the unfathomable trip.” ffitch herself homesteads in Appalachian Ohio, where she “raises ducks, goats, and her small son, Nector,” and that life makes its way into her stories, which are full of plant names, animal trapping, and women of fairy-tale-giantess proportions who chop wood at age six or emerge from the woods with a “dead goat yoked around her shoulders.” Indeed, many of the stories feel as if the writer hunted them down and returned with them yoked around her shoulders.

Amidst all this vigor, however, we find lulls of quiet depth. In “Fort Clatsop,” the eccentric Frank, a school janitor, and his young daughter, Huck, are struggling “in a world of plain men and women.” Frank often recounts his imaginary travels with Johnny Appleseed, Woody Guthrie, Wyatt Earp, Elvis Presley, and other historic figures. When Frank and Huck’s house is condemned, they secretly move into the basement of the school where he works and she attends sixth grade, killing Huck’s hope she might one day fit in.

This unshakeable feeling of being different shapes the story. To the outside, their “differentness” looks like poverty and oddity. But Huck comes to understand that whatever their current circumstances, there is something desirable in their way of seeing the world, if only they could translate that vision into a sustainable way of life. She tries to explain this to a new friend, who has never heard of any of the famous iconoclasts her father claims as “his crowd,” “that these were our talismans, our measure of the brightness that had occurred, that could occur again.” Translation: Once upon a time, these singular people lived and became radiant in their time. We live in a world that values sameness, but it could happen again.

ffitch, likewise, tells stories in her own idiosyncratic, resolutely ffitch-like way, and as I hand you this particular poultice against ennui, here are the fine-print warnings—possibly polarizing aspects, elements that readers may find distracting.

First: The endings often swerve suddenly. “Valparaiso, Round the Horn” seems to be a third-person tale—until the final paragraph, when a first-person narrator appears, and we realize the entire story has been a prelude to a proclamation of undying love. In one story, the world abruptly ends in cosmic fireworks; in another, the characters realize they are separated-at-birth twins. Are these off-kilter endings crafted to shift a story’s meaning, like the unexpected twist in a parable, or for the sheer pleasure of the strange? Up for discussion. You may say, as some of us do at the end of Haruki Murakami novels, “no fair”—or you may love the rebellious weirdness and re-read the story, as I did, to see if you can uncover the logic behind the end.

Second: The dialogue in these stories is often Wes-Anderson-weird—the way people might talk if they were simultaneously as honest as children, awkward as adolescents, and sharp as quick-witted adults. In the title and first story in the collection, a lovelorn character named Abie is receiving advice from his boss, Phil, on how to talk to women. Phil says that women might like Abie better

…if he said something like this to them: “There’s a tiny little owl, the strangest, cutest owl. Yes, it has been appointed the cutest owl, and the strangest owl.” If he spoke from the heart. If he asked her questions about herself, questions such as, “Is it cuter, do you think, than those two kittens there, fitted together sleeping like beans?”…

“What if she asks what the tiny owl is called?” Abie asked.

Strange owl, indeed. Not everyone loves this sort of dialogue, but ffitch’s imaginative scenarios (probably further muscled by her years as a performer with The Missoula Oblongata, the punk theater troupe she co-founded) almost demand it. It is the kind of thing that makes these stories a delight to read aloud.

ffitch’s characters may live on the fringes of contemporary or “plain” society, as Frank puts it in “Fort Clatsop,” but that society still leaves their stamp on them, and they wrestle with what they’ve inherited—especially in what you might call matters of the soul. The Granddad in “Storm Beach” raises Edmond to “make up his own religion, his own method, his own blueprint reason.” Still, he makes that journey down the cliffs to baptize the baby, though no one is there to witness it. The rite itself has meaning for him, even though the traditional theology may not.

In “The Private Fight,” a white man, Maxwell Conley, is on his deathbed and desperate to talk with a black man, Murray Rose, whom he hasn’t seen for years. These two men have an old, brief, intense connection: as teenagers, Murray saved Maxwell’s life—but a short while later, grieving and angry after the assassination of Rev. Dr. Martin Luther King, Jr., Murray also said to Maxwell: “White boy ain’t got no soul.” Murray was a teenager in a moment of anguish when he spoke those words, but they have haunted the white man ever since. Maxwell was raised Catholic and though he’s mostly lived apart from that faith, the question still plagues him. Now Maxwell is desperate to talk to Murray, craving confirmation that he, Maxwell, does have a soul.

Through Murray’s response, a monologue to the dying man’s niece, ffitch deftly tackles some of the racial baggage inherent in all this—including Maxwell’s belief that somehow, as a black man, Murray should be expected to have more authority on souls:

I don’t want to hurt your uncle’s feelings now, not when he’s sick and worried, but if he wants to sit there turning us into symbols, it just won’t work, man, and it’ll only make things worse. You think I know more about souls than you people do? Do you think that’s because I’m black?… I’m no priest.”

Even so, the weight of this question on Maxwell’s mind, and the story’s placement as the book’s penultimate one, lends it some import in the book as a whole. Souls are the territory of humans, all humans, ffitch seems to argue, and some ways of human living enlarge our souls, and some ways impoverish them. Finally, as Maxwell dies, “what he wants most is to be unmanaged. He wants to be twelve years old and alone with his dog, coming down Mount Rainier in the night, down past the timberline, where the Douglas firs begin.” There it is again: the draw to wild places. The desires of characters like Maxwell and others in this book may reveal a bit of the author’s belief that these wild places are the territory where the human soul most comes alive.

Or perhaps not. Maybe to live soulfully has less to do with whether we can burn our grandfathers’ bodies on beaches and more to do with a certain honest alertness and compassion-in-action, which is also in abundance in the book. It’s right there in Murray’s monologue—which is spoken in Seattle, in the “modern world”—in the fact that he speaks it to Maxwell’s niece and not the dying man himself, in his desire not to hurt Maxwell unnecessarily, though he cannot answer his question.

Whether your home base is rural, like ffitch’s, or you dwell in the city or in the suburbs, as I do, finding a potent book like this frees up the imagination—resets the moral compass—not through moralizing, but by jarring us. I read this book aloud, story by story, to my husband on our commute, and each time, it jolted me out of routine. It made me feel alive.