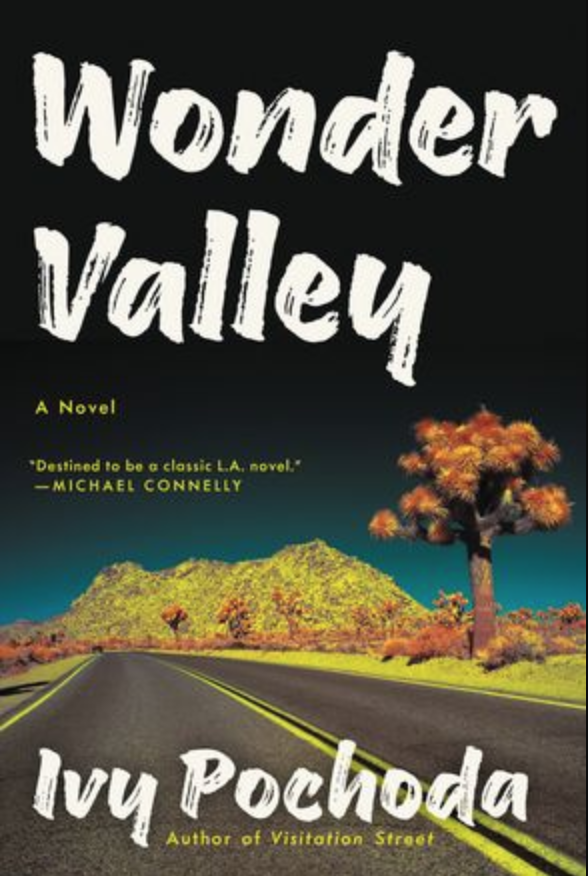 In Ivy Pochoda’s latest novel, Wonder Valley, we find ourselves amidst a scruffy, largely invisible subset of Los Angelenos: drifters, con artists, criminals, quack healers, the homeless. The few in their orbit who have money or a measure of success are in danger of losing their souls. Everyone is close to the edge, all the time. Yearning. Longing. Trying to get someplace. Anywhere but here.

Like Pochoda’s previous book, Visitation Street, which was set in Brooklyn, Wonder Valley is a literary thriller at heart. It has been called “California Noir” and “California Nasty Noir.” It gallops along at a breathless pace. The language is street-smart. Pochoda has a good ear for dialect. It’s also a deeply compassionate book. She dedicates it to the writers and artists in the Lamp Arts Program in L.A.’s Skid Row, where she teaches. Her eyes are wide open with an informed empathy for people most of us step over or block out.

The novel isn’t one story, but a Rubik’s cube of interlocking stories occurring between 2006 and 2010, across the region, from the freeways to Skid Row to the desert to the ocean. Everyone here has a guilty conscience. By accident or on purpose, they’ve hurt, killed, or endangered someone. Their lives have gone irrevocably off-track as a result, and they’re desperate for respite and release, like characters in the Greek myths, pursued by the Fates.

The book begins with an image—a video, really: a morning in 2010, stopped traffic on a snarl of Los Angeles freeways and the beacon of a man, a naked man, running through the lanes: “… shirtless, the hint of swimmer’s muscle rippling below his tanned skin, his arms pumping in a one-two rhythm in sync with the beat of his feet…”

The trapped, bored drivers on their phones are riveted. The naked runner becomes a media event, an Internet sensation. Police helicopters circle. To Tony, a lawyer, a Westside failure, whose marriage is crumbling along with his sense of self, the runner is a metaphor for the freedom he’s lost. Tony is haunted by his own negligence. He let a drunk summer intern go home alone from an office bash, and she was killed by a train. He leaps out of his car, chases and loses the runner. The next thing he knows, he’s on the ground, handcuffed, trying to explain to a cop that he didn’t even know the guy.

In another car, there’s Ren, a Brooklyn boy who spent eight years in juvie for an unintended childhood crime, who returned home to find his family gone, and has come to LA to atone. He’s doing a good deed in a bad way, using a “borrowed” car to take his dying mother to the beach. The police helicopters make him sweat. He just has to get through this moment. (This is as good a place as any to point out that Pochoda has transplanted her most endearing character from Visitation Street to L.A., where he continues to be the street kid equivalent of a mensch. Maybe he’ll finally get the good life he deserves in her next book.)

It takes a while, maybe more than one reading, to follow how all the stories fit together. Pochoda makes the reader work. Narrated in present tense, the stories seem to all be happening consecutively or at the same time. Actually, the first time we meet a character, he/she may be well along in his/her saga, and the next time we connect will be earlier. That’s the case with Ren on the freeway. And Britt, a college tennis star whose crisis of conscience is that she fled from a car accident, leaving a friend unconscious or dead. We meet her in Tony’s second chapter. Drawn by curiosity, or some sixth sense that he could be useful, Tony goes back to the police station to find out what became of the runner—he’s a nuisance to the cops—and Britt, who needs to find the runner herself, recognizes Tony from the online videos. Tony takes her to a dive bar—it’s Saturday morning—and discovers that the runner’s name is James, and a dangerous guy named Blake is also chasing him—and Britt.

The narrative doesn’t so much progress as back and fill, moving each story, then leaving it for another. Each episode is labelled by name, place, and year, to help the reader keep track, as in “James, Twentynine Palms, 2006” or “Tony, Los Angeles, 2010. In any case, the desperation in Wonder Valley gets worse in linear fashion, escalating the literary tension with it. The book’s least redeemable characters drift deep in the desert. Blake is a low-life drug dealer who sells prescription meds, and Sam is a Samoan behemoth/murderer who’s superstitious, mean, and being slowly poisoned by gangrene from a broken leg. These two are also on a collision course with a commune off a desert highway called Wonder Valley not far from Twentynine Palms, a town about 100 miles inland from Los Angeles. James and his brother Owen are the twin sons of a scuzzy “healer” named Patrick and his cynical, disgruntled wife. Britt washes up here too, while running away from herself. The scenes in the commune, where a bunch of stoned and starry-eyed “interns” are manipulated into savaging each other emotionally, slaughtering chickens, and having sex with Patrick, are the most graphic and gruesome of the book.

Pochoda’s good at holding the camera still, even for a scene of chicken carnage that ends with Patrick forcing one of his twins to eat a hawk he shot after refusing to behead a chicken. The reader might flinch though:

James slipped off. He plunged into the pond where he could see Owen. His brother was crouched at the edge of the fire. Their father stood over him as he plucked the hawk’s feathers. The quills were stubborn, forcing Owen to yank hard, stretching the bird’s tough skin. Every so often Patrick would hold the bird up, examining its naked flesh. It took Owen nearly an hour to denude the hawk’s body….James ducked under so he wouldn’t have to smell the hawk’s muscled flesh roasting over the fire…When he returned, Owen was back at the fire, eating one of the charred legs. Their father waited until he was finished…before handing him a second helping. Owen held up his hand, clutched his stomach, put a hand over his mouth. But Patrick insisted…”

As seen here, the writing is spare. Every once in a while there’s a poetic line like “the setting sun left the sky over the Sheep Hole Mountains the color of the flesh of an overripe plum,” but Pochoda doesn’t linger over descriptions. The stories are too important.

Everyone here twists and turns, piling on more guilt for bad deeds—new, old, and imagined—until eventually the stories converge and the good find, yes, some measure of redemption. After all that suffering and yearning, the last scene feels transcendent. We are right back where we started, but now Tony, after helping Britt, finds that place which is “essentially and undeniably him. It’s small and solid like the sea-smoothed rocks beneath his feet.” All anyone can ask for in the end.

Lisa Alexander’s work has appeared, among other places, in Cimarron Review, Fifth Wednesday, Litro, Meridian, Prick of the Spindle, Fugue, and Southern California Review. Her fiction won the UCLA James Kirkwood Award in Creative Writing. She has an MFA in Fiction from Bennington College.