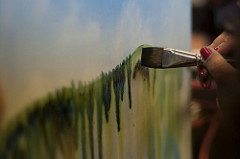 Go to meet redness.
Reach it with all the necessary brutality.
Refuse facile images. Self-portraits. Portraits of any sort.
But go without reserve, crushing water underfoot, unyielding to the childlike pleasure of splashes against naked legs.
Go as a painter.
Roll up trouser legs, remove espadrilles and dig your will into the torrent: meet the red there, take it captive. Bury your madness in the icy water.
Without dying of this.
Without speaking of it either.
Keeping absolutely quiet, driving the whiteness of your memory into the red matter.
Later, not a single word to tell.
Most important is being able to take further the red gleaming streak, icy too and red above all else.
Take it home, wherever home is.
In the clutter of granite, sometimes a wall rises.
But from so far away, nothing of the house can be glimpsed.
Some children have a home and others, paper boat on water, have lost it.
Have been hounded from it.
When they are older the door to a shed is opened for them: a workshop? A place to stay and at night soothe a while the rage of the day and its light [. . .]

So this redness in the spring of 1919, above Céret, in the abundance of water, this shining red in the torrent would give new life to the gestures of painting. Would bring it into existence. Would give it tongue. Because, when asked the question as to where he came from and what he did with his days, he replied only with an incomprehensible gesture, making a sort of bridge with his hands, and no one, not even among his friends, knew what he meant. Yet the translation was easy: an embracing of painting, right hand and left hand clasped together.
Why learn a language that meant nothing at all? He used the one taught to him by his arms and legs, all his body since he had come from his far-off childhood.
No one in Céret understood the language spoken by Chaim Soutine. And he asked himself what would become of all his red paintings. Perhaps he painted excessively, but how would he explain that he could not do otherwise, or the boredom set in, hence painting, but Z. had warned him, few prize what you do so we will show only a few canvases and see what happens, if you could only hold yourself back a bit and then canvases are dear, that’s what art dealers say and how to gainsay them except barefoot in the redness with brutality.
Perhaps this red would finally floor Z. and all the others, let them cease thinking of me as a madman because I share neither their language nor their kind of painting, and let me become somewhat other than myself, Chaim Soutine the painter, no longer that lean stranger who eats little and drinks a lot.

Denis Hirson was brought up in South Africa and lives just outside Paris, France; he teaches at the École Polytechnique. The latest of his seven books is the novel The Dancing and the Death on Lemon Street. He is also the editor of the 2014 anthology In the Heat of Shadows, South African poetry 1996–2013.